In the aftermath of Ubolratana’s aborted entry into electoral politics, New Mandala was pleased to be able to interview Supalak Ganjanakhundee, the editor of the Thai daily newspaper The Nation and a long-time observer of the country’s politics. Here, Supalak makes a persuasive case for dismissing rumours of an impending coup, arguing that elites are currently locked in much more insidious forms of regime building.

[NM] The Election Commission has ruled to disqualify Ubolratana from running as a prime ministerial candidate under Thai Raksa Chart. It remains possible that the Constitutional Court will dissolve Thai Raksa Chart completely. What would the consequences be for Pheu Thai in that scenario?

[SG] On the whole, Pheu Thai may lose the election. There’s no time for the party to prepare now. There’s no Plan B. The worst case scenario is that Pheu Thai will also be dissolved. The junta may try to kill two birds with one stone—they may try to argue that Pheu Thai knew about the candidacy. It’s no secret that people like Chaturon were formerly Pheu Thai. Those opposed to Thaksin will have to prove in court that Pheu Thai were informed about Ubolratana. But I understand that as long as Friday night’s royal command is in place, [in the event that the case is brought to the Constitutional Court] the court won’t see it any other way. The court will probably rule against the law, as the courts often do—the appeal to something outside the law, to make judgements on the law. If we are to make a clear argument, there is no legal status to the royal command.

The events of Friday have intensified fears that the junta will cancel the elections completely. Yet it seems that the pre-Friday and post-Friday electoral outcome will remain broadly in Phalang Pracharat’s favour: no clear majority government, allowing for an outsider prime minister. In this respect, is there really a pressing need for the junta to cancel elections?

I understand that Pracharat will try to create a political discourse against the Thaksin camp, by arguing that he brought the royal family into Thai politics—this is a dirty thing in Thai society. It’s not appropriate to have high society running in dirty politics. Now Pheu Thai is in a very awkward position indeed. Look at Thai Raksa Chart—there is no candidate without Ubolratana. Chaturon is not running—it’s sad for him, but it’s true. It was very risky for the party. They should have had Chaturon run, at least. Pheu Thai itself faces a problem also, between Chadchart and Sudarat. Sudarat is listed as the first candidate, but it is really Chadchart who has a good reputation in Thai politics.

Another thing working in the favour of Phalang Pracharat is what we call the “progressive faction” among supporters of Thai Raksa Chart—former red shirts and groups like that. They disagree with Thaksin’s choice, believing that a party like Pheu Thai or Thai Raksa Chart should never have brought on a blue blood as a prime ministerial candidate. They were furious on the day that Ubolratana announced her candidacy. This group—well, they’re probably not going to vote for Phalang Pracharat—but they may move their support to other parties like Anakot Mai (Future Forward Party). Well, Anakot Mai is probably too naïve for politics, so they might not vote for Future Forward after all. But people are saying that they cannot trust Thaksin anymore. It’s very difficult for voters who are loyal to democracy to vote for Thaksin now. A friend of mine said, “Well, even Seripisut is a better choice—at least he has a very clear stance”.

Surely Thaksin should have seen this situation arising!

At the beginning, I treated it all as a political game between Thaksin and the established elites. Thaksin was playing a “high-valued hand” in using Ubolratana. Thai people, more or less, could interpret the story in two ways. One way is that the bargain was the best solution for achieving reconciliation. For Thaksin, Ubolratana was really the perfect choice to connect to the palace. In addition, she would have been like a shield for him from attacks by the junta. Nobody would want to compete with Ubolratana as a candidate for prime minister.

At first, we also anticipated that Prayuth would withdraw and not accept Phalang Pracharat’s invitation. When he decided to join the race, that was cause for doubting whether this was all under the approval of the King. I think things went wrong when—I understand that the junta calculated that they would lose the election if Ubolratana was a candidate.

Thaksin underestimated the King. You have to understand that by law, she is a commoner. This legal argument is very valid—the argument that she is a commoner, that she is qualified, that she is exercising her citizenship, the rights of her citizenship, her constitutional rights. Moreover, the royal command on Friday night was not a law. A royal command can only be applied within the [royal] house, not to people outside the house and particularly not in the political sphere. So it was logical for Thaksin. He might have calculated that this outcome was possible, but he underestimated the King. The other possibility is that the King changed his mind—otherwise Prayuth might not have shown his confidence by jumping into the game.

Rumours are also swirling that a coup is on its way. But again, there seems no observable cause for any faction in the military to engage in such drastic measures yet.

The rumours about a coup are based on the belief that the King commands another faction in the military—the belief that Khun Apirat is loyal to the King, rather than to the government and Prayut [Editor’s note: read Paul Chambers’ New Mandala article on palace–military networks here]. Those who buy into this theory say that there is a division between the Wongthewan and Eastern Tiger factions. They understand that Wongthewan is smaller than the Eastern Tigers but that Wongthewan is siding with the King. Some believe that Prayuth persuaded the King to change his mind and stay with him—in such a case, the Eastern Tigers then controls the palace, as opposed to the palace controlling the military. So the rumours are that the King will exercise his power to “white wash” the military.

But I don’t buy the theory that the King is so strong. I understand that he is trying to build the influence of his faction in the military, but the Eastern Tigers may currently have more [influence]. His power is not—well, he could not have consolidated his power already. It will take time to have everything under his control. From my understanding, the military wants to have their own voice. The military wants to use the monarchy as it did so before—when it was the kingmaker, when the king acted under consultation because the military had real power. Now we live in a situation where the monarchy and the military are in tension over who will control who. It will take a few years for a clear picture to emerge.

So the picture—the relationship between key institutions such as the military and the monarchy—remains murky?

For me, the picture is not clear at all. The King commands loyalty from some factions of the military but people like Prawit and Prayuth want to be like people like Prem—middlemen between the palace and the military. They’re building their own regimes but this might also take time as they each hedge their bets.

If you combine the idea of network monarchy and the deep state together, we might say that the overall effect is the emergence of some new regime that combines the military, the monarchy and capital. Big capital is always willing to support the monarchy, willing to support the military. Pracharat is the perfect model for combining royalty, the military and capital. The difficulty [in consolidating a model] is the unpredictable character of the King.

I understand that, in the end, the current King will have to design a regime from which he can rule behind. It’s not safe for him if he’s constantly at front and centre [of major political decision-making]. How could be build loyalty in the military? What about the next reshuffle in the military—will he do it himself? No, of course not. Does he have enough manpower to control everything himself? I think we know that he doesn’t. He has to redesign his regime in other ways: how to command the military without fear and secure true loyalty?

What Kasian [Tejapira] has been trying to say is that there is a need for a new consensus, upon which all factions, all layers in society can agree. But we don’t have the forum to build such a consensus [Editor’s note: read Kasian Tejapira’s New Mandala essay on the “end of the Bhumibol consensus” here]. The election is not powerful enough—it’s not open enough. At first, I had a little hope that the King was aware when Ubonratana made her announcement—that the King would announce that, from then on, she would not be involved with the palace. That people who are commoners will be commoners. That would be the best way: to allow the law to be the law. To respect the law, because she has already stepped down from royal status.

So you view the King as consolidating his power in a much longer process. And it’s not sensible to expect overnight interventions like a coup.

No, no, that’s impossible. The junta has been unified before the monarchy since King Rama IX. The new King has just begun his work. It’s only been a few years—less than two years. He has Khun Apirat but has to deal with the military from the outside, he has to consolidate his properties. I don’t think he’s finished yet. It will take a long time. 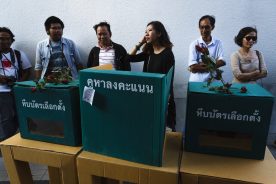 The events of Friday ignited a flurry of political discussion, particularly on social media. How temporary is that opening—or have questions been opened that will be difficult to close?

The trend will not be an opening up [of discussion]. It will be a closing. Look at what the King has done since he took the throne—the message has been that he wants the country to be in order, disciplined. Look at the way he dealt with the constitution. He amended the constitution after the referendum—that’s the standard by which he exercises power. It’s not the rule of law. I really have little hope and will be pessimistic that our country will be ruled by the rule of law.

We are living with fear. When we [the editors] received orders [from the Nation Group’s executive who oversee three national newspapers] on Friday night, we just stopped—any legal criticism, discussion of whether it was right or wrong legally—we just stopped. We followed the orders. Though I take interviews myself and try to test the limits.

Should we expect a period of heightened curbs on freedom of expression and cases of political persecution? On Ubolratana's abortive PM candidacy and what it suggests about the fragmentation of the "network monarchy". 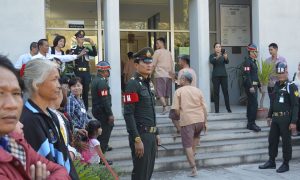 The Khon Kaen Model(s): when terror and transportation infrastructure meet

The two "Khon Kaen Models"—one an alleged red-shirt terrorist plot and the other a transit infrastructure project—effectively model the process by which the junta secures obedience.