When Malaysia’s unexpected new Pakatan Harapan government seeks advice about law reform, it will surely consult the many capable Malaysians with expertise in this area: current and former judges; members of the Bar; legal academics, and scholars of the Malaysian constitution and its history; the Human Rights Commission of Malaysia (SUHAKAM); and the many civil society groups and social movements that now share an accumulated wealth of experience and wisdom.

Malaysians certainly do not need well-meaning foreigners to tell them what is wrong with their legal system, or how to fix it. That is why these suggestions are addressed to inform an Australian and international audience interested in these matters.

Making it safe to offer advice

As a preliminary measure, in order to ensure that experts and the public can openly discuss law reform proposals without fear of reprisal, the government will need to announce a firm commitment to repeal the Sedition Act, and then follow through once Parliament is summoned. Sedition law has no place in a properly functioning democracy, and for too long Malaysians who disagree with the government, state agencies, or political pressure groups have been the subject of vexatious police reports, investigations and prosecutions.

Pending the repeal, it would be improper to commence new investigations and prosecutions, or to continue any currently in the system. The same applies to other laws that intimidate Malaysians from speaking freely on matters of public importance.

At present there is no independent and expert statutory body that can investigate whether current laws should be repealed or amended, and make recommendations based on those findings.

That work has instead been done by civil society organisations such as Bersih (the Coalition for Clean and Fair Elections), JAG (The Joint Action Group for Gender Equality), HAKAM and the Malaysian Bar. In the past, SUHAKAM, which has a mandate to advise the government on legal changes necessary to make Malaysia compliant with its human rights obligations, has also made many recommendations but has usually been ignored by the government of the day.

Establishing an independent law reform commission that could investigate the need for legal change, invite public submissions (including from civil society groups like those just mentioned), circulate discussion papers and draft reports for public comment and then make an informed recommendation to government, could only assist the systematic and thorough renovation of Malaysia’s legal system.

Importantly, such a body could measure how far existing laws comply with the constitution, and make recommendations accordingly. It should examine the constitution as well. Crucially, it could investigate and facilitate informed public debate about the advisability of retaining the constitutional provisions that allow government to proclaim a State of Emergency (article 150) or legislate to combat subversion (article 149). Much mischief has been done under cover of these two provisions—laws permitting detention without trial, for example—and it is surely time for a mature discussion about their continued existence.

Furthermore, some of the most divisive issues in Malaysian public life have involved interpretation of the meaning of constitutional rights and freedoms, and the intersection of civil and Syariah law. Allowing these debates to be ventilated in a civil and reasoned manner through a Law Reform Commission could be an important step towards solutions.

The way that Parliament makes law is also crying out for reform. Parliamentary scrutiny of legislation has been inadequate. The opposition parties usually do not see a bill until it is tabled, which hobbles their ability to make meaningful proposals for amendment. Now the boot will be on the other foot and the Pakatan Harapan government will have the advantage over what is left of the BN coalition in the Dewan Rakyat.

If it is committed to meaningful reform, the entire process of introducing and debating bills will be revised. In Westminster-style legislatures the elaborate system of standing and special select parliamentary committees can, with the aid of expert testimony and public submissions, subject proposed legislation to thorough investigation and analysis. This process has long broken down in Malaysia, but it could be restored.

An essential element of the Rule of Law is that law is public. People and entities subject to the law should be able to find it and read it, even if they require assistance to interpret and apply it.

At present, Malaysian laws are not all freely available. True, the Federal Constitution and many principal statutes can be accessed without charge on the Laws of Malaysia pages of the Attorney General’s Chambers’ website, but there is room for improvement. The site is not up to date and only the most recent version of an Act can be accessed. This means it is impossible to tell whether, and if so, how, the Act has been amended because amendments are not noted, and historic versions of the law are not kept on the site for cross reference.

Being able to keep track of amendments can be important for a whole range of reasons, including working out the best interpretation of the current law by comparison with the old version. The PDF version of the Federal Constitution does contain some notes and references to amendments, but non-lawyers will have difficulty working out what these mean and how to access the amending laws and previous versions of the constitution (there are many, because the constitution has been amended frequently). The e-Federal Gazette (on a different section of the AG’s Chambers’ website) carries more current information, but it is difficult to use.

Subordinate legislation (also known as subsidiary or delegated legislation) includes the rules, regulations, notices and so forth made by the government agencies by under delegation from an Act of Parliament. These sorts of legal instruments are difficult to find on the AG’s website too—perhaps intentionally.

Lawyers, government departments and law schools that subscribe to legal databases can access more current versions of Malaysian statutes, see how amendments have been made, search for rules and regulations made by authority of the statute (although database coverage is patchy here), and follow the hyperlinks to legal cases decided under those laws. But the cost of these services makes the law beyond the reach of the public.

The new government could cooperate with the Free Access to Law Movement and the ASEAN Legal Information Portal to make all current and historic law—statutes, case law and subordinate instruments—easily accessible to the Malaysian public.

It is beyond doubt that Malaysians have lost faith in the impartiality and professionalism of public bodies responsible for investigation and prosecution of criminal misconduct—such as the Attorney General’s Chambers and the Malaysian Anti-Corruption Commission—and the regulation of the media and of elections—the Malaysian Communications and Multimedia Commission and the Election Commission, respectively. The impartiality and judgment of the police has been questioned.

When the courts hand down irrational or poorly reasoned judgments at the end of a tainted investigation and prosecution, then they, too, lose credibility. Internationally, the best-known instances are perhaps the repeated criminal prosecutions of Anwar Ibrahim for corruption and sodomy, and, alternatively, the failure of Malaysian authorities to properly investigate former prime minister Najib Razak (and those associated with him) over the millions missing from the sovereign wealth fund (the “1MDB scandal”). But there are many more instances. 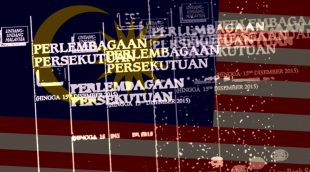 There have been too many police reports of sedition that should never have been entertained, lodged by attention-seeking right-wing ratbags out to harass people whose views they cannot tolerate; too many times when the Public Prosecutor (the alter-ego of the Attorney-General) has appealed an acquittal on specious grounds, or sought an increased penalty, because the defendant is a critic of the government. And the blatant misconduct of the Election Commission is too recent to need describing here.

In the Westminster system of government, it is difficult to avoid the political nature of the Attorney General’s office. Requiring the AG to be a Member of Parliament—as Pakatan Harapan’s election manifesto promises—does not solve that problem. But separating out the function of the AG from the Public Prosecutor is necessary to remove the appearance of political bias in prosecutions, and that too is in the manifesto (Promise 15). Similarly, more thought should be given to ensuring the independence of the Solicitor General, whose office is currently enmeshed with prosecutorial functions too.

In civil litigation, the Attorney General—and the Solicitor General—could consider how to teach the government to act as a “model litigant”. Essentially, this means that when the government or a state agency sues or is sued by a citizen or entity, the state does not act oppressively by relying on technical defences, taking advantage of the comparative lack of resources between the parties, denying and contesting issues of fact that it knows to be true, denying legitimate claims or prolonging litigation. (Some Australian guidelines are here and here). If state governments adopted this practice, then it would apply to the way the various State Islamic Departments conducted litigation too.

Perhaps proposals like these are already being considered by the newly constituted Committee on Institutional Reform, established by the also newly convened Council of Elders. Given the expertise and deep experience of the Committee members, they will doubtless offer wise and pertinent counsel.

What is open to doubt, however, is the willingness of the new government to heed the voice of law reform, given that after just a few days there is already public disagreement between Prime Minister Mahathir and two key government MPs (Nurul Izzah of PKR and Lim Guan Eng of the DAP) over repeal of the draconian Anti-Fake News Act, even though abolishing it was one of Pakatan Harapan’s campaign undertakings. Predictably, Mahathir is not so sure this is a good idea any more. But whatever he thinks, it seems clear the Malaysian electorate plainly expects the new government to carry out fundamental reforms. It would be tragic to see those hopes dashed by a government that calls itself the Alliance of Hope. Why Malaysia's voters delivered a momentous political upset in yesterday's election, as seen from the ground.