Academic staff of the Myanmar Research Centre at the Australian National University in Canberra on Wednesday submitted an open letter calling for the release of Professor Sean Turnell from detention in Myanmar to the country’s ambassador in Canberra.

The letter had 360 signatories from universities across Australia, among them many leading economists and prominent scholars of Southeast Asia who are friends and colleagues of Turnell.

“Professor Turnell has given many years to assisting Myanmar’s engagement with the international community as an advisor on economic policy,” Charlotte Galloway, the director of the MRC, told the ambassador upon submitting the letter on behalf of the signatories.

“His detention is at odds with our values of free and open exchange of knowledge,” she added.

Copies of the letter and signatories have also been sent to the Australian minister and shadow minister for foreign affairs, Department of Foreign Affairs and Trade, and the Australian embassy in Myanmar. 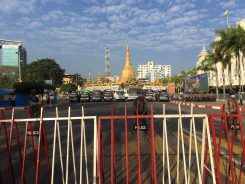 The letter notes that Turnell was detained in Myanmar on February 6, five days after the military coup on 1 February. He has been held incommunicado since.

An economist based at Macquarie University in Sydney, Turnell is well known for his research on Myanmar’s banking sector.  In recent years he spent much of his time in Myanmar, offering economic advice, and working with the Myanmar Development Institute.

“That Professor Turnell is an academic with a strong and genuine commitment to Myanmar there can be no doubt,” the letter states.

“His credibility and ethics are exemplary. His detention is unjustified. We call for his immediate release, without charge,” it concludes.

In communications to the MRC, the Australian government reiterated that it is doing everything it can to assist Professor Turnell and secure his release.