BBC under fire on Rohingyas Burma has a new non-headline-making, yet popular, political event. The BBC Burmese Service has come under intense pressure from ethnic Arakan regarding Anna Jones’ article “Bleak outlook for Burma’s ethnic groups“. The article, which appeared in November 2010 in the Asia Pacific Section, included a map of Burma in which Arakan state was identified with a photo of ethnic Rohingya children. The article also referred to Muslim Rohingya as an ethnic group of Burma as opposed to Buddhist Arakan’s assumption of them as illegal aliens from Bangladesh.

Jones’ article, after a year of its publication, has outraged ethnic Arakans. Hundreds of people, including monks and women, have turned to BBC Burmese Section’s Facebook page to pressure the Section with harsh, nationalistic and even openly racist language. Their demands include a public apology from BBC headquarters, Burmese Section and Anna Jones; removal of the Rohingya photo from the map; and removal of Jones’ article altogether. They also urge the people of Burma to boycott BBC if it fails to apologize.

There are two intriguing points in this protest. First, although Arakan ethnic members very often talk against majority ethnic Burmans (or Bamar) for what they call the “colonization of Arakan”, “Burmanization” and Burmese chauvinism, they now mobilize the entire Burmese population against Rohingyas to “protect Burma and its ‘national races’”. Both Arakan and non-Arakan ethnic members have joined the campaign, calling Rohingyas illegal immigrants from Bangladesh.

The newly popular Facebook user, Cho Tu Zal, a writer and director who was at the forefront of the recent anti-Myintson dam campaign is a leading anti-BBC protestor. He wrote on his Facebook that BBC must take responsibility and apologize for this fault. If not, he is prepared to boycott BBC whether or not other people do so and that he would urge his families and colleagues, Aung San Suu Kyi and other leaders to get the BBC apologize.

The anxiety is so strong that the map and the article are taken to be giving away the country, its religion and nations to Rohingya. What is most noticeable in this campaign is not simply their rejection of Rohingya as an ethnic group of Burma, but their strong, public comments with a genocidal tendency. The following quotes written in Burmese illustrate the nature of the campaign.

Kick out all Muslim Kalar [Rohingyas, South Asians/Indians] from Burma. If this doesn’t work, then kill them to death. It’s time for Arakan to unite with each other.

Don’t assume that I won’t sharpen my knife. I am ready to make it sharp for the sake of protecting our nation, religion and races against those Bengali cheaters.

There is no Kalar in Burmese national races. These bastards run into Burma during good time and also in time of starvation. Beggers, they should be kicked out but do not deserve national identity card [citizenship].

Why does BBC create problem like this? I cannot imagine why. Real Burman like myself cannot feel [accept] it. I feel like my [ethnic] relatives and siblings have been given away into the hands of Kalar. Whichever history we look at, Rohingyas are not among our ethnic siblings.

[email protected]#$-ing Kalar, we will slap your face with shoes and cut your heads. Don’t criticize the god with little of what you know. We will set you on fire to death and turn the mosques into wholesales/retail pork markets…

The main messages of the campaign, therefore, are that there is no Rohingya in the Burmese history; the name Rohingya was “invented” as if it should have existed in time immemorial to be valid; Rohingyas are culturally and religiously different illegal immigrants from Bangladesh who are cheating the history to claim the land of Arakan; and Rohingyas (or Bangali-Muslim-Kalars) are threatening to take over Burma. The intense campaign against Rohingyas shows that minority people supposedly the victims of oppression are willing to enact oppression on another oppressed group.

Second, while people of Burma (if not the entire population) are likely to oppose to the Burmese government on every ground, anti-Rohingya campaigners conveniently accept the junta’s classification of eight major ethnic groups (Kachin, Kayah/Karenni, Karen, Chin, Mon, Burman, Arakan and Shan) and 135 sub-ethnic groups. This is one major basis of denial that Rohingya is an ethnic group of Burma. More than that, the campaigners utilizes state-sponsored songs used as propaganda against foreign intervention. Protestors also utilize the government’s not-clever media campaign:

The above ‘killer broadcasters’ slogan has already been abandoned by state television and newspapers since August this year, but has now been picked up by anti-Rohingya protesters. This illustrates that the government can mobilize support if it plays the Rohingya card. As such, it is doubtful if the current round of anti-Rohingya campaign serves to divert public attention away from Burma’s Chinese dilemma (Myintson dam, growing Chinese population and influence across the country and antagonism against them) and post-election conflicts with the Kachin, Shan and Karen armies.

BBC Burmese Service responded that the map was not intended to illustrate all ethnic groups but only a few of those that are significant. BBC has also changed the map by adding a photo of Arakan ethnic women. These updates do not satisfy the campaigners as they want a complete removal of the Rohingya photo from the map and a public apology. As the days go by without apology, the protesters also turn against other news agencies – Democratic Voice of Burma, Radio Free Asia, the Irrawaddy, Mizzima and Voice of America – accusing them of failing to protect the nation, religion and ‘national races’.

Prior to this protest there are three incidents in October this year related to Rohingya issues. First, U Tin Oo, vice-Chairman of National League for Democracy, said in a weekly interview program with Radio Free Asia (Burmese Section) on his experience as an army commander under Ne Win’s government that Rohingyas are immigrants from Bangladesh and that he helped protect ethnic Arakans from Rohingya threats. Second, Maung Maung Than, Director General of Immigration and National Registration told BBC Burmese in regard to the repatriation of nearly 30,000 Rohingya refugees from Bangladesh that Burma has no ethnic group called Rohingya. In early October, Arakan political groups organized events denouncing the Rohingyas’ use of the name “Arakan”. These events have renewed an intense campaign against ethnic Rohingya.

No political organization or politician, except ex-student leader Moe Tee Zun, has so far picked up the issue. Moe Tee Zun, referring to the stance of Democratic Alliance for Burma (DAB), wrote that Rohingya is not an ethnic group of Burma. He proposes that equal citizenship rights for Roingyas should be guaranteed.

The only openly pro-Rohingya rights has been activist-academic Maung Zarni, a fellow at the London School of Economic, who calls anti-Rohingya campaign “neo-fascist, racist…un-Buddhist, un-Christian and disgusting”.

Recently, online blogs and social networking sites have appeared, openly advocating against ethnic Rohingya. Examples are Anti Rohingya blog and Anti Rohingya Facebook. One of the main patrons of Anti Rohingya movement has been Dr. Aye Chan from Kanda University of International Studies in Japan. He co-authored a publication entitled “Influx Viruses: The Illegal Muslims In Arakan” in which Rohingyas are referred to as “Influx Viruses”. 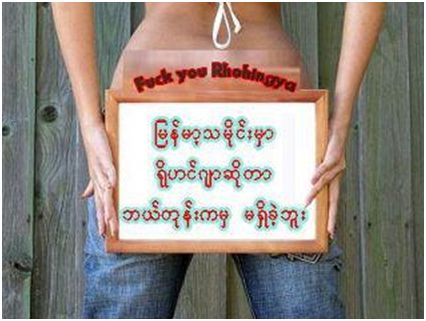 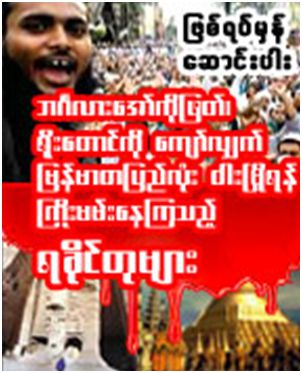