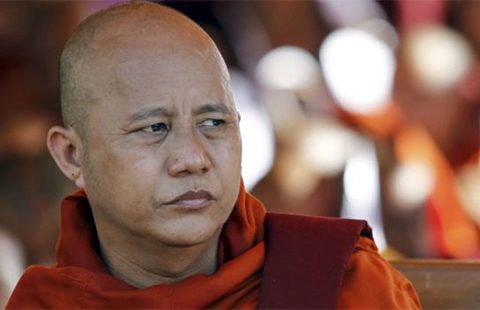 Buddhist extremism after the vote With the NLD’s landslide victory, have hardline monks lost their political power in Myanmar?

The results also constituted a strong popular rebuke of military rule, as the former generals of the incumbent Union Solidarity and Development Party (USDP) suffered an embarrassing defeat.

But another group was also revealed to be less politically powerful than expected: the Buddhist nationalist organisation known as Ma Ba Tha, or the Association for the Protection of Race and Religion.

Led by Buddhist monks who espouse a particularly vocal brand of anti-Muslim nationalism, Ma Ba Tha had spent months lobbying for the enactment of legislation and policies aimed at “protecting” Buddhism in Myanmar.

Before the election, many observers were predicting that Ma Ba Tha’s growing clout could impact the electoral outcome. The organisation had already proven itself to be a political power player, securing by mid-2015 the passage of four “Race and Religion Protection” bills restricting interfaith marriage, religious conversion, and Muslim birthrates.

Today, however, the monks of Ma Ba Tha have fallen out of the headlines.

As the NLD prepares to take the reins of government, Ma Ba Tha is in a decidedly weaker position than it was before the vote. And the dramatic reversal of fortune is thanks, in large part, to the group’s own choices during the campaign.

Though Buddhist monks are technically barred from direct participation in Myanmar politics, in the months leading up to election day, the monks of Ma Ba Tha intervened repeatedly in the campaign.

Prominent Ma Ba Tha leaders, including the notorious Wirathu, called on supporters to vote for candidates who would safeguard Buddhism and traditional Burmese culture. In many instances, they made it clear that this meant the ruling USDP.

Wirathu and others argued that the former generals could be better trusted to protect Buddhism than Aung San Suu Kyi. At rallies in September celebrating the passage of the “Race and Religion Protection” bills, Ma Ba Tha monks urged supporters not to vote for the NLD, claiming that the party was backed by “Islamists.”

For the NLD and other parties, Ma Ba Tha’s passionate support for the USDP was a cause for concern. Aung San Suu Kyi herself spoke out months before election day against Ma Ba Tha’s campaign rhetoric. The party even filed an official complaint with the Union Election Commission, claiming that Ma Ba Tha’s politically charged statements violated restrictions on the use of religion to influence the election.

But NLD leaders, wary of Ma Ba Tha’s influence, dared not cross the monks on the issues they championed. Fearful of backlash, the party refrained from nominating a single Muslim candidate on its ticket, and NLD leaders sidestepped questions about anti-Muslim sentiment and policies, including persecution of vulnerable Rohingya Muslims in Myanmar’s Rakhine State.

In the end, however, Buddhist nationalism proved to be less of a political force than many, including the NLD, had predicted. The NLD’s promise of change ended up being more alluring for voters than Buddhist nationalists’ pledges to preserve religion and culture.

Not only did the USDP lose badly despite the strong backing of Ma Ba Tha, other political parties that based their platforms on Buddhist nationalism performed particularly poorly. The National Development Party (NDP), founded by a former presidential advisor, for instance, failed to win a single seat in any legislative body nationwide, despite fielding hundreds of candidates.

After the results were confirmed, Ma Ba Tha announced its tepid support for the new government, but cautioned that it would “not accept any insults to race and religion.” Wirathu explicitly warned the NLD against attempts to amend the “Race and Religion Protection” laws or the controversial 1982 Citizenship Law, which effectively bars Rohingya from full rights.

But with the USDP’s ranks in parliament decimated, the monks have lost a key ally in their efforts. Ma Ba Tha’s choice to actively denigrate the NLD during the campaign now leaves it in a difficult position, since the new parliament and government will be dominated by the party. While NLD leaders may have kowtowed to Ma Ba Tha prior to election day, they owe the group nothing now and, freed from the looming threat of electoral consequences, could feel emboldened to act against Ma Ba Tha’s preferences.

Ma Ba Tha is by no means out of the game yet, however.

Though not the electoral driver some predicted it to be, Buddhist nationalism remains a potent political force in Myanmar. Many still fear the “Islamic invasion” and loss of Burmese Buddhist culture that the monks warn about, and Ma Ba Tha remains well organised and capable of capitalising on these anxieties.

There also remains the potential for Ma Ba Tha to benefit from trouble in the months to come. The monks have hinted at the potential for post-election “turmoil,” and there is some precedent for such a scenario.

Just over two months after the 2012 by-elections that saw Aung San Suu Kyi and over 40 other NLD candidates elected to parliament for the first time since the transition to nominally civilian rule, violence between Buddhists and Muslims exploded in Rakhine State, killing hundreds and displacing nearly 140,000. The violence drove many in Myanmar into the embrace of Buddhist nationalism and presaged the rapid rise of Ma Ba Tha and similar groups.

Ultimately, though, Ma Ba Tha seems to have have overplayed its hand in advance of the vote.

By siding so decisively with the USDP, the monks put all their eggs in one basket, underestimating public support for Aung San Suu Kyi and the NLD and overestimating their own political clout. Wirathu himself claims that he was surprised by the election outcome, and he may well be wishing he had done a better job gauging the public mood.

The irony is that, while NLD parliamentarians did not champion the “Race and Religion Protection” bills, they are far from the “Muslim lovers” that Ma Ba Tha campaign rhetoric made them out to be. Had the group refrained from taking sides in the election, its leaders may have been able to work with NLD politicians, many of whom do not necessarily disagree with all of Ma Ba Tha’s policy positions.

Instead, Ma Ba Tha priorities, including the passage of even more stringent anti-Muslim legislation, may be substantially more difficult to achieve.

Though an NLD government will be loath to challenge the still powerful group directly, Ma Ba Tha has certainly lost its privileged position in Myanmar politics and now faces an unnecessary barrier entirely of its own making.

Oren Samet is a Bangkok-based researcher and political analyst. His work focuses on democracy and rights issues in Southeast Asia, with a particular emphasis on political dynamics in Myanmar.