"Jakarta Neighbourhood" by bbcworldservice is licensed under CC BY-NC 2.0

Amidst the rapidly worsening COVID 19 pandemic in Indonesia the number of new infection keeps rising and shows no signs of abating. There is still a severe lack of testing, and the health system is at the risk of being overwhelmed. To stem the spread of the virus, a range of policies have been instituted, from severely restricting international and regional travel to closing down malls and instituting PSBB. Yet large sections of society are still carrying on their days as usual. How can we understand this paradox?

It was Tuesday afternoon when despite my commitment to staying at home, I had to drive through the main road of Sudirman-Thamrin for an errand that I couldn’t avoid anymore. The scene was surreal. The traffic flowed flawlessly with hardly any cars on the road. It was hard to believe that it was a work day when that traffic corridor is usually congested. I thought to myself: maybe people are indeed staying home and adhering to large scale social restriction (PSBB), a local semi-lockdown policy instituted by the Jakarta local government. Yet, as I turned my car towards my house in one of the densest sub-districts in Jakarta, that assumption was shattered. As I navigated slowly through the narrow urban kampung street people still wandered around, children and teenagers congregated joyfully playing or singing. In other words, it was just another day in Jakarta’s dense urban kampung. Are these kampung residents simply ignoring their own safety and that of others? And are they consequently being bad citizens?

In this article, I will reflect on these questions using the relational lens of social class, with the assumption that the notion of a good citizen is still heavily embedded within a normative bias from the privileged classes. Here, the narrative of good citizenship can be seen as tied to obedience and following all the rule of PSBB: staying at home, not travelling and maintaining personal hygiene. This emphasis on obedience is very visible in government messaging on the pandemic, including heavy use of security apparatus to enforce it. To be clear, I do believe that PSBB is an important and prudent course of action. Yet, the problem here lies in the potential to use adherence to PSBB as an uncritical litmus test to judge good and bad citizens. The actual issue lies much deeper than simple ignorance or selfishness among kampung residents, but in persisting inequality in Indonesian society.

To start with, the disregard for PSBB among the residents of urban kampung can be traced to how the public messages about the pandemic are disseminated. Studies show that there is a complex process before information can be translated into actions. This process starts with the most basic prerequisite: people have to trust the information. People’s trust in public information during a pandemic is a function of their experience in interacting with public institutions in general. If people feel that they have been mostly disappointed by public institutions, they are less likely to believe in and follow directions during a pandemic. In this matter, basic health services in Indonesia for much of the population are still far from ideal. People still largely have negative experiences in accessing public health, such as poor service, long waiting times, and a complex bureaucracy. This may partly explain skepticism towards government policies among this section of the population.

The second step for information to change one’s behavior is that it has to be actionable. Again, PSBB reveals a deep fissure between the privileged and the marginalized class. This can easily be seen through two prevalent taglines that are also repeatedly used by the government to advocate for PSBB: “stay at home”and “work from home”. These two taglines are biased towards the middle and upper class who can afford to do both, albeit with much inconvenience. But for many of the poorer people living in Jakarta’s kampung, staying at home is simply impossible. Recent BPS data shows that 23% of Jakarta’s population live in houses that is less than 20 square metres. In denser areas, these houses could be smaller and may be inhabited by several families at once. In Jakarta alone, at least 20% of RW (neighbourhoods) are categorized as dense slums. Many households in these dense settlements do not have toilet and sanitation facilities, so activities outside the home cannot be avoided. The same goes with working from home. While images of professionals on Zoom meetings flood social media, people working in the informal sector—amounting to 55% of the total workforce—still have to go out to peddle their wares, sell their labour or commute to their workplaces. In short, both taglines represent information that is simply not actionable for many of the people living in the dense urban kampung.

Finally, for information to turn into action, people must believe that their behavior has an impact on the wider community, both negative and positive. This is the most difficult aspect because it is related to risk perception. Risk perception is closely related to  socioeconomic status. The stronger your social security, the higher your risk threshold, and vice versa. In other words, being able to think about a longer-term risk is a privilege in itself.  The recent flatten the curve campaign that is ubiquitouson social media is indeed a very important public message. Yet it may not mean much to the vulnerable groups living in the slums. In addition to its alien terminology, the biggest perceived risk for this social class may not be spreading the virus, and as a result, burdening health services. Their risks are much more immediate, such as not being able to bring in income for their family if they don’t go out to work. Furthermore, as one observer recently argued, the lukewarm response towards pandemic measures may also be because health crises are the daily reality of the poor. Even before this COVID 19 epidemic, infectious diseases like dengue or tuberculosis have regularly killed tens of thousands of people every year. 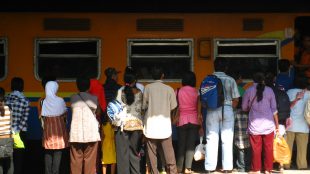 All around the world, Covid 19 pandemic has laid bare the stark divisions in society, with the poor and marginalized bearing the brunt. Yet, the public narrative that is circulating increasingly puts the onus of responsibility towards the poor and marginalized.  Early during the pandemic, the government spokesman highlighted the need for solidarity, the rich should help the poor and for the poor to not infect the rich. More recently, with the banning of holiday or mudik, the local media was rife with coverage on how the poor people who went back to their hometown bringing the virus, and news images of police checking trucks for people who smuggled themselves through quarantine zones. These images increasingly create a public narrative which sees them as “bad citizens”, unruly people who are ignorant of their own safety and that of others. Social media is also awash with the (richer) netizens commenting on their frustrations with these irresponsible “bad citizens”. Yet, much the commentary and news coverage neglects the fact that many of these people are not returning to their hometowns for their holidays, but because they simply can’t survive in the city after losing their jobs.  Meanwhile, President Jokowi had recently expressed his plan to make  exceptions for “business travellers” and allows them to travel by air, further highlighting the chasm of PSBB rule between the haves and the have-nots.

The simplistic view that sees disobedience during a pandemic as a result of personal selfishness or ignorance is unproductive and may risk further marginalized the already vulnerable. Forceful raids on street peddlers and vendors that resulted in the damage and destruction of property can be seen as one manifestation of this biased approach. The prevailing public narrative of the poor as the “bad citizens” also exacerbates the shame and stigma of being poor, further fostering the already deep seated distrust among this section of society, and severely undermining pandemic control now and in the future.

The recent spike of Covid19 infections in Singapore should serve as a stark reminder of how ignoring and alienating the marginalized, such as migrant worker communities, can jeopardize efforts to contain the pandemic.  There is no shortcut to building effective resilience towards pandemic but reducing social disparity and inequality would help. Long term investment in social welfare should be boosted to enhance public trust in basic service institutions, especially in health. This is imperative to reduce livelihood vulnerability and disparity and to build community resilience in responding to shocks. Only then will we be more prepared to face another large-scale pandemic, which we know now is not a matter of if, but when.