The “orang gila” scare in Indonesia

What's behind a fresh panic about attacks on Islamic figures at the hands of "crazy people"?

In the past couple of months, a regular feature of the right wing (for lack of a better term) Indonesian Facebook groups I follow has been “news” of attempted attacks on ulama by orang gila—“crazy people”.

Posts about these purported attacks take a similar form: a video or series of photos with a brief description of an incident in which an unknown person makes a threatening appearance at a mosque, pesantren or ulama’s house. After being detained by an emotional mob, this orang gila is sometimes said to have “confessed” to being a “sympathiser” of the Indonesian Communist Party (PKI). Many posts describe the assailant as pura-pura gila or “pretending to be crazy”. (A Facebook or Twitter search of “pura-pura gila” or “orang gila” will yield a representative enough sample of these videos; some, I should warn, include distressing vision of purported attackers—many of whom really do not appear to be mentally well—being manhandled or beaten by the crowd.)

This week, the orang gila issue breached the confines of social media and achieved cut-through. After a meeting with the senior police and antiterror officials, Indonesia Ulama Council (MUI) chairman Din Syamsuddin said that police were aware of 21 cases of attacks on ulama since December 2017. The mainstream news media is now devoting considerable coverage to the orang gila attacks.

The government and its supporters don’t seem to know how to spin it. Jokowi has instructed the police to deal “firmly” with those responsible for attacks on religious leaders, while his chief detective has suggested, in quite vague terms, that the orang gila issue is an orchestrated hoax. The police’s spokesman said that some reports of attacks were hoaxes, others not. Nadhlatul Ulama chairman Said Aqil Siroj has doubted that the attackers were gila at all, telling Metro TV that the wave of attacks appeared too “tidy, systematic, and orderly” to be the work of the mentally ill. Health Minister Nina Moeloek had to reassure the public that “orang gila” cannot be “taught” to attack ulama.

Jokowi’s political opponents, meanwhile, have seen political opportunity. The tireless Fadli Zon went to the trouble of writing a poem about how “crazy people are becoming more dangerous/massacring ustadz [religious teachers] so callously”. He had earlier told reporters that ulama in his electorate had discovered that their homes had been “marked” with strange symbols, as if for future targeting.

In an attempt to display that they’re taking the issue seriously, local authorities across Java have begun rounding up orang gila on the streets and transferring them to (presumably abysmal) care facilities.

Indeed, it’s more than a little curious that the orang gila scare is making headlines at the start of a year in which three vote-rich provinces in Java will elect governors ahead of the April 2019 presidential polls. Politicians are already trading accusations: PPP party chairman Romahurmuziy, a Jokowi ally, has said that the attacks were the work of an unnamed “powerful figure” with an interest in discrediting the Jokowi government ahead of the upcoming elections. This is a pretty transparent swipe at Prabowo Subianto; the Secretary-General of Prabowo’s Gerindra party took Romahurmuziy’s bait and dismissed the idea that the attacks had anything to do with politics. 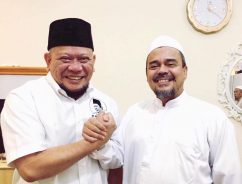 Details on a falling out between pro-Anies Baswedan political parties and the religious leaders behind the 212 movement.

Of course, this is also occurring in a climate of renewed paranoia about the reemergence of the PKI. A seemingly coordinated wave of attacks on Islamic leaders from an shadowy enemy will trigger memories in many Indonesian minds of the violence committed by PKI members towards ulama during the Soekarno era. It’s also difficult to avoid being reminded of the “ninja” killings in East Java in the 1990s.

Whatever is going on here (and I won’t pretend to have any idea) it’s interesting to see it in light of the debate following the 2017 Jakarta gubernatorial election over whether Jokowi could be “Ahoked” in 2019—that is, taken down by a dirty tricks campaign designed to inflame the sentiments of Muslim voters. Jokowi is known to be seriously concerned about Indonesia’s “fake news” problem, being a common target of hoaxes spread on social media already. The president could be forgiven for harbouring a little paranoia about whether the real target of the orang gila is not Javanese ulama, but himself.

If any other Indonesia-watchers reading this post have relevant observations, information, or speculation on what the orang gila scare might mean, please contact me at [email protected]