Ahok is not Jokowi

The recent election defeat of Jakarta’s Christian governor, Basuki Tjahaja Purnama (Ahok) raises important questions about whether the Indonesian president Joko Widodo (Jokowi) will also fall to the forces of right wing populism. Jokowi is up for reelection in 2019 and will likely face the same coalition of parties that defeated Ahok. As other scholars have noted, the same forces of class, ethnicity, religion, and their interplay will likely feature in the 2019 election.

Ahok’s opponent, Anies Baswedan and his running mate Sandiaga Uno, rallied all the forces of intolerance: mass mobilisation by the vigilante group Front Pembela Islam and the Islamist Partai Keadilan Sejahtera (PKS), a rumor campaign that millions of Chinese were coming to Indonesia illegally and that voters for Ahok would not be buried in Muslim cemeteries, bogus allegations that Ahok had committed blasphemy against Islam, and Baswedan himself comparing the election to the 624 CE Battle of Badr when the prophet Muhammad faced an army of non-Muslims. We should expect to see these tactics again in 2019, when President Jokowi will likely run against former Lieutenant General Prabowo Subianto and possibly against Baswedan himself.

There is reason to worry about the future of Indonesia’s democracy. The world is in the midst of democratic instability and decline. Military coups in Thailand and Egypt have pushed those counties firmly into authoritarianism. Recep Tayyip Erdoğan’s Turkey is no longer a democracy. The victory of elected strongmen in the Philippines and even the United States bodes poorly for the future of democracy. Will Indonesia fall sway to the machinations of an autocrat like Prabowo?

And there are further reasons to be concerned about the future. Baswedan was once the archetype of a ‘moderate Muslim’. He wrote his PhD thesis at the University of Northern Illinois on the subject of democracy and decentralisation under the renowned political scientist Dwight King. He spent seven years as Rector of Universitas Paramadina, trying to fill the shoes of the pioneering democratic theorist Nurcholish Madjid. There is cause for alarm when a pedigreed intellectual like Baswedan deploys a craven election strategy. He knows better. Like Donald Trump and the increase in hate crimes in the US, Baswedan’s campaign rhetoric will make life more difficult for minorities in Indonesia. But Baswedan chose power over pluralism.

Even more troubling is that Baswedan won on that basis. When moderate Muslim voters reward such tactics, there is reason to ask whether the civil Islam underpinning Indonesia’s successful democracy has become prone to radicalism. Will Indonesia fall sway to the machinations of a demagogue like Baswedan?

Yet, there is reason for optimism, too. Treating Ahok and Jokowi as the same—technocratic centrists running on a coalition of non-Muslims and liberals—underemphasises their differences. Jokowi is not Ahok in three ways that matter for 2019. First and foremost, Jokowi is a Muslim. Ahok is a Christian. Indonesian Muslim civil society leaders support democracy, pluralism, and the basic rights of non-Muslims but that has never meant they are in favor of a non-Muslim becoming president or even governor of a city like Jakarta which is overwhelmingly Muslim. Indonesia’s mass Islamic organisations are largely tolerant but they are not liberals who believe anyone should be able to hold any office anywhere, regardless of their religious affiliation. Political analysts have a hard time understanding Muslim voters that are neither liberal-secularists nor Islamists, but the overwhelming majority of Indonesian Muslim voters are neither.

If we narrow the survey sample to the leaders of NU alone, the most tolerant of the mass Islamic organisations, only 52 percent believe a Christian should be allowed to be governor in Jakarta. Surveys by Saiful Mujani and R. William Liddle, and by Robin Bush, suggest that the leaders of the mass Islamic organisations are slightly more tolerant than the members, and the members are about 10 percent more tolerant than the broader Muslim public. That means a Christian’s winning the governor’s office without Jokowi’s coattails was always a long shot. We should be cautious about drawing conclusions about Jokowi’s election prospects from Ahok’s defeat.

Second, Ahok was extremely vulnerable to Baswedan’s smear campaign. Unless Jokowi does something heroically stupid, a blasphemy campaign will not stick to Jokowi in the same way that it did Ahok. There are also strategies that Jokowi can use to defend himself that were unavailable to Ahok.

Baswedan is not the first unsavory politician to claim the mantle of ‘defending Islam’ in order to win political power. Baswedan’s predecessors include Madjelis Islam A’la Indonesia (MIAI) in the 1930s, Masyumi in the 1950s, Sukarno in the 1960s, and Amien Rais in the 1990s and 2000s, among others. In the 1930s, the MIAI was a coalition of Muslim organisations united by their shared antipathy to heterodox interpretations of Islam; in that instance, defending Islam worked. Likewise, in 1965 President Sukarno successfully mobilised support from Muslim organisations on the grounds of defending Islam against animist and mystical religious sects in Java. Defending Islam against threats of heterodoxy and blasphemy is often useful to politicians trying to transform a latent Muslim identity into one that is politically salient.

But a common tactic is not always a winning one. In the 1950s, Masyumi failed to hold together a coalition of Islamic organisations because modernist Muslims like Muhammad Natsir marginalised NU’s influence. More recently, Amien Rais deployed the politics of demagoguery in the 1990s and again in the 2014 election in support of Prabowo, but has had limited success. In both instances, NU prevented a single group from speaking on behalf of Islam. Such history provides lessons for 2019. Moderates from NU, Muhammadiyah, and other pluralist Muslim organisations will be crucial to defending Jokowi against the charge that he is a ‘threat to Islam’.

Ironically, NU and Muhammadiyah’s formal distance from electoral politics has had a paradoxical result for democracy. By adhering to the liberal prescription to formally separate religion and politics, they have weakened their ability to steer their followers in the direction of pluralism. Nonetheless, some affinity exists and it is worth Jokowi’s attempting to gain support from Islamic civil society.

Many observers would prefer that religion be ‘off the table’ of Indonesian politics, which is why they savaged Jokowi’s admission that religion is inevitably involved in politics. But Jokowi was correct. Survey data tells us that voters overwhelmingly expect their elected representatives to believe in God and to bring religious values to bear on social issues. State institutions reflect those preferences through religious education, mandatory membership in a recognised religion, limitations on inter-religious marriage, restrictions on blasphemy, restrictions on inter-religious proselytising, and other policies. Indonesian democracy is not secular in any meaningful sense of the term, which means that candidates for office often align with powerful religious movements.

Third, Jokowi is Javanese. Ahok is Chinese. Jokowi’s Javanese background is likely to be beneficial in 2019. Without more fine-grained data, is difficult to know whether Ahok’s ethnicity, religion, blunt manner, or the campaign to ‘defend Islam’ cost him the most votes. Simplistic depictions of voters as either primordialist or rational ignore the complex ways that identity influences political behavior even in industrialised democracies.

From Jacksonville to Jakarta, ethnic similarity provides a way for politicians to establish trust with voters from different religious backgrounds. In Indonesia, Muslims from religious diverse ethnic groups like Balinese, Dayak, and Javanese tend to be more religiously tolerant than Muslims from more religiously homogenous ethnicities like Sundanese, Acehnese, and Sasak. So, for example, a Javanese Christian would likely have done better among Javanese voters than a Chinese Christian. Given Baswedan’s Hadrami heritage, Jokowi may have a comparative advantage in being able to appeal to Javanese voters.

That does not mean Jokowi should play the bumiputra (son of the soil) card in the 2019 election. Again, demagoguery has no place in democratic politics. The long term health of the country depends on the leaders of the state and society promoting the values that make democracy work—tolerance, equality, liberty, and popular sovereignty—against the visions of xenophobic nationalism and strategic intolerance harnessed by demagogue and autocrats. 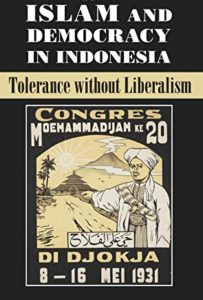 Jeremy Menchik is Assistant Professor in the Fredrick S. Pardee School of Global Studies at Boston University. His recent book, Islam and Democracy in Indonesia: Tolerance without Liberalism (left) explains what tolerance means to the leaders of the world’s largest Islamic organisations and elucidates the implications for democracy.

Header and article photo: jars of indelible ink at a polling booth in Indonesia’s 2009 legislative elections. Taken by the author.