Judging from national and international headlines, Jakarta’s gubernatorial election on 19 April represents not just a major turning point for the nation’s capital and city of 12 million, but potentially for the entire country. The alarmist tone is largely due to the unsettling direction campaigning has taken over the past eight months, that has seen any possible substantive policy debates over how to best tackle Jakarta’s complex infrastructural, economic, and social problems subsumed by sectarian identity politics.

Initially a relatively fringe movement led by serial troublemakers the Islamic Defenders Front, objections to Ahok as governor on the grounds he was a non-Muslim snowballed after allegations he insulted Islam, and the subsequent laying of blasphemy charges. It presented the perfect opening for his rivals, who pumped significant financial and political resources into reframing opposition to him on identity lines. Focusing for most of the campaign on modest policy achievements and managerial competence, Ahok’s team recently responded in turn with an emotive campaign video highlighting a commitment to pluralism and tolerance. While the campaigns present, at one level of analysis, a stark contrast between ‘diversity’ on the one hand and sectarian populism on the other, a shared point of commonality is the respective silence regarding a significant shaping force in Jakarta, and arguably the election: rising levels of economic inequality.

Indonesia’s Bureau of Statistics has recorded steady increases in levels of economic inequality in Jakarta, reflecting the national trend of the past decade. The country’s much-heralded economic growth has been marked by growing concentrations of that wealth in the hands of a few, and a stagnation if not deterioration in the standard of living of a vast majority of Indonesians. According to a 2017 Oxfam report on the widening wealth gap, inequality has been driven by a combination of ‘market fundamentalism’, high concentrations of land ownership, and the second lowest rate of tax collection in Southeast Asia.

The poor and precarious bear the most drastic and damaging impacts of economic inequality, though in a densely populated megacity like Jakarta it is felt by all social and economic classes — albeit in often vastly different ways and with a range of social and political consequences.

For Jakarta’s upper middle classes the desire for security, lifestyle, and convenience — together with the push by developers for profitable all-inclusive developments — has meant increasingly self-imposed spatial separation from other social and economic groups within gated estates, apartments towers, shopping malls and private vehicles. Once a city of economically mixed neighborhoods, large parts of the city are spatially divided by class and ethnicity. This can be seen in the city’s north, where remaining kampung sit in uneasy tension alongside luxury apartments and gated communities. This socio-spatial shift has been reflected politically in middle class demands for an ‘orderly’ city free from the inconveniences of traffic congestion, overcrowding, and flooding, but minus the self-sacrifices required to achieve these. The poor provide convenient scapegoats. It has also fed the popularity of strong, ‘uncompromising’, and arguably authoritarian leadership styles as represented by Ahok, but also his former party chief and now political adversary Prabowo Subianto.

For the lower middle class, perhaps the closest to a socioeconomic ‘majority’ in the city, rising inequality and social disparity creates a host of contradictory anxieties and tensions. As seen elsewhere in the world, fears over job and tenure security with rising costs of living can manifest in receptiveness to populism and conspiracy culture.

Populism is fueled not only by anxiety over economic conditions, but also cultural and social tensions. What may be fluid identities in the course of everyday life can harden in the face of ongoing uncertainties, such as seen in the well documented rise of self-conscious displays of religious piety and social conservatism. Both campaigns have appealed to these rising anxieties resulting from broader economic transformations, albeit in different ways.

Ahok’s program of neoliberal urban redevelopment and infrastructural improvement has been explicitly pitched to a middle class anxious to enjoy amenities and lifestyle comparable to Singapore or Seoul. His unwavering stance regarding the eviction of informal neighborhoods, for example, has been popular with middle class constituents, in part due to the perception of a commitment to the rule of law, but also because they have been exempted from it.

While his double minority status has not been used as an explicit focus of campaigning it has been regularly cited by supporters, such as Teman Ahok, as an inherent positive within the context of Indonesian democracy and a sign of the city’s embrace of pluralistic tolerance, albeit one now seemingly under threat. As Walter Micheals has argued, the emphasis placed by liberal elites on diversity often masks social and economic inequality, and the economic structures from which their own wealth and status are gained. The diversity of an elite is used to rationalise its existence.

In mixed poor and lower middle class neighborhoods in Jakarta, where heterogeneity is considered by many a simple fact of life, resentments towards ‘elite pluralism’ have been exploited by a variety of political opportunists. The Islamist anti-liberalism movement, for example, has drawn significant support from this social base, which later dovetailed with the religiously framed opposition to Ahok. The advocacy or defence of policies deeply hostile to the poor and working class by liberal commentators and activists has served to underscore the view that liberal pluralism is corrupt and self-serving. Anies Baswedan’s campaign has opportunistically embraced the political benefits of the fanning of identity politics, while either pretending not to see it or insisting it isn’t really an issue at all. His supporter networks (including hardline clerics) have been less reticent, exploiting anxieties and material hardship via rhetoric that mixes critiques of neoliberalism and democracy with xenophobia.

Throughout the New Order, ethnic Chinese Indonesians were maintained as a convenient scapegoat for the regimes failure to make good on its trade off of curtailed political freedom in return for economic development and to distract from the systemic looting of the country’s resources by the Suharto family and its cronies. This ‘tradition’ has been revived through the spread of conspiracy theories via mosque sermons and social media.

Even a cursory glance at the composition of the candidates’ political coalitions provides an insight in to why inequality may not be a political or policy priority. 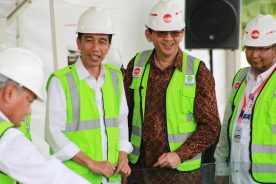 Ahok, a former protégé of Golkar and Gerindra, has well documented links to developer conglomerates such as Agung Podomoro, Sinarmas and Agung Sedayu and is backed by an alliance of parties that includes, among others, media mogul and National Democrat party leader Surya Paloh. Similarly, his rival’s running mate Sandiago Uno is listed in the top 50 richest Indonesians, as is Gerindra financier Hashim Djojohadikusumo. Other backers of Anies Baswedean include ethnic Chinese billionaire and Trump supporter Hary Tanoesoedibjo. The conspicuous silence from Anies’ supporters surrounding Hary’s backing, despite the racialised attacks on Ahok, is indicative of its instrumentality. These constellations of rival political elites collectively constitute a substantial percentage of the greatest beneficiaries of Indonesia’s economic growth. Economic inequality is, for them, arguably less a crucial problem to be tackled through structural reform than one to be politically managed and manipulated. The framing of elections in terms of polarising identity politics, be it sectarian or pluralist, and the subsequent arranging of social conflicts, serves to both obscure and capture the anomie generated by inequality.

The victims of this politics of misdirection are those vulnerable minorities for whom the stoking of sectarian sentiments poses a very real and potentially dire threat, together with those for whom the channeling of their anger into identity politics will provide no concrete answers to the economic pressures that they face.

Ian Wilson is a lecturer in politics and security studies and a Research Fellow at Murdoch University’s Asia Research Centre. You can follow him on Twitter at @iwilson69.

All photos in this article are the author’s own.