Foo Foo and the international press 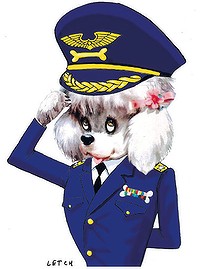 Thailand’s most famous poodle has featured prominently in the Sydney Morning Herald in an article by Asia-Pacific editor, Hamish McDonald:

Military promotions are closely watched in Thai political circles, understandably given the coups periodically mounted in Bangkok. How then to evaluate the news that one Foo Foo, a miniature poodle belonging to Crown Prince Maha Vajiralongkorn, has been elevated to the rank of Air Chief Marshal in the Royal Thai Air Force?

We learn this in a cable from the former US ambassador to Thailand, Ralph Boyce, reporting his farewell calls on the royal family at the end of 2009, brought to us courtesy of WikiLeaks.

Foo Foo had attended a jazz festival gala dinner with his master, ”dressed in formal evening attire complete with paw mitts”, Boyce said. ”At one point during the band’s second number, he jumped up onto the head table and began lapping from the guests’ water glasses, including my own. The Air Chief Marshal’s antics drew the full attention of the 600-plus audience members, and remain the talk of the town to this day.”

Royal doings assume more importance in Thailand than here. The king takes an active interest in government formation, as well as being a semi-sacred figure in the official Buddhist hierarchy. The current monarch, King Bhumibol Adulyadej, has been on the throne more than 60 years. His prestige is immense; public affection enormous. But at 83 he has been ailing after a reported stroke and makes only rare public appearances.

The Crown Prince is viewed with misgivings, after a tearaway youth that doesn’t seem to have ended at 58. His behaviour continues to raise eyebrows, especially when a video circulated last year of a poolside birthday party for Foo Foo, at which his Royal Consort, Srirasmi, sat bare breasted.

The monarchy has meanwhile become political ammunition in the battle between the ”Red Shirt” supporters of the populist former telecom tycoon turned prime minister, Thaksin Shinawatra, and the ”Yellow Shirt” backers of a more traditional elitism who wave the royal colours.

Other US diplomatic cables from WikiLeaks suggest the royal house itself is also somewhat divided. Three of the most senior officials close to the king – the former prime minister Prem Tinsulanonda, the head of the Privy Council and a former army general, Anand Panyarachun, another former prime minister and air chief marshal Siddhi Savetsila – were quoted by the new US ambassador Eric John last January as saying they prefer the king’s popular daughter, Princess Sirindhorn, as successor.

The three elders were worried by Thaksin’s cultivation of the Crown Prince, by paying off his debts and providing a luxurious new house in Bangkok. Vajiralongkorn preferred to spend time in Munich with his favourite consort, rather than with his official wife and children in Thailand, and had kept a succession of air hostesses as his mistresses.

The ambassador quoted Anand as saying the Crown Prince would succeed his father according to the law, but there could be ”complicating factors” if the prince proved unable to stay out of politics, or avoid embarrassing financial transactions.

“After a pause, Anand added that the consensus view among many Thai was that the Crown Prince could not stop either, nor would he be able, at age 57, to rectify his behaviour,” John reported. But no one could raise ”such a delicate topic” with the King. [Read the full article for more.]

Nothing new here for regular readers of New Mandala or followers of Wikileaks. But the article, in Australia’s highest quality broadsheet, is yet another sign of the international credibility collapse that the Thai royal family has experienced in recent years.