1. TVOne compares the English language levels of the Presidential candidates

Now, as far as ‘low blows’ go during the campaign, 24-hour news station TVOne seems to have sunk to a new depths. This 4 minute piece explicitly compares the English-language abilities of Prabowo and Jokowi, making Prabowo out to be a modern-day Shakespeare, and Jokowi stumbling and bumbling his way through rather broken English. TVOne of course is owned by Golkar Chief Aburizal Bakrie, who supports Prabowo’s campaign, with Golkar part of Prabowo’s coalition. But would people really be more likely to vote for Prabowo because he speaks better English? What seems certain is there will be more efforts like this in TVOne to discredit Jokowi’s campaign. And don’t forget to watch rival 24-hour news station MetroTV (owned by NasDem Chief Surya Paloh; NasDem is part of Jokowi’s coalition) to see how it might discredit Prabowo’s campaign. What would a modern-day Indonesian election be without a TVOne-MetroTV battle? Recent months have seen more than enough comparisons between Jokowi and Obama (see here, here and here). Well, one more thing the two men have in common is that both faced down ‘birther’ movements during their presidential campaigns. Of course, the entire dynamic was reversed; Jokowi was accused of not being a Muslim. And perhaps having learned from the US that in the age of social media these things just don’t go away by themselves, the Jokowi campaign released his marriage certificate – via the PDI-P’s official Facebook page. But just when the birthers were satisfied with Jokowi’s Islamic credentials, the focus shifted to whether Prabowo is, in fact, an Indonesian citizen. During his post-1998 self-imposed exile in Jordan, Prabowo was accused of having been granted Jordanian citizenship by his pal, King Abdullah of Jordan, which would have automatically annulled his Indonesian citizenship. But it turns out Prabowo had kindly declined the offer.

3. The photo of the week

The image of the week was undoubtedly one taken during former Religion Minister (and current corruption suspect) Suryadharma Ali’s visit to the palace to inform President Yudhyoyono of his intention to resign.

The president tweeted this photo of their meeting from his official account: 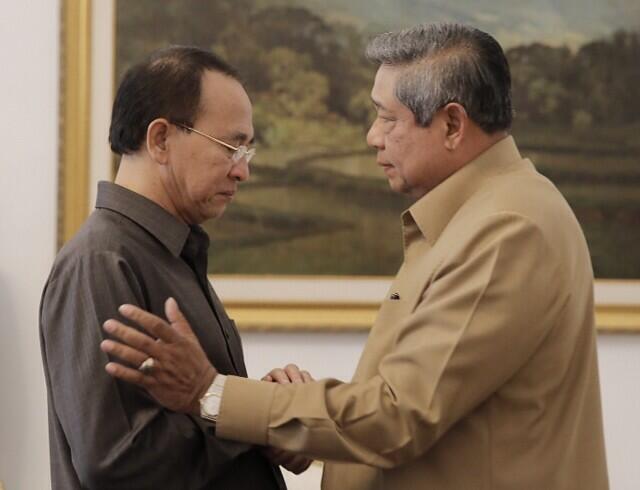 Naturally, the internet had a field day superimposing imaginary dialogues on top of this image. If you’ve got a good idea for a caption or speech bubble, leave us a comment below.

Bonus: prepare to be mesmerised

(Speaks for itself, really).

Forget Prabowo’s human rights record, this week the Jokowi smear campaign has been all about sex sex sex of the staid connubial kind as pro-Jokowi social media sites have ramped up their attack on Prabowo’s love life, or absence thereof. A number of nasty internet memes have been given new life this week; one that couples photos of a smoochy Jokowi and wife Iriana to Prabowo being licked by his horse, and the other one that pitches Geindra Chairman, Fadli Zon as Prabowo’s devoted wife. The latter we’ve posted here just because New Mandala is classy that way. 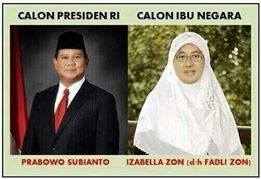 Indonesian elections haven’t known a bujangan in politics and like in many political cultures, it’s being single rather than promiscuity, that furrows the public brow. Of course, Prabowo wasn’t always a bachelor. He famously married Titiek Suharto in 1983 but they divorced quietly sometime around 1998.

Ever helpful, Erwina Yunarti, Chairwoman of PAN’s women’s wing (PUAN), charged in and made a public spectacle of herself this week by announcing that PUAN would reconcile Prabowo and his estranged wife so that Indonesia wouldn’t be bereft of a first lady. After all, lamented Gerindra’s self-proclaimed Cupid, it was politics, not love, that separated them. Fadli nipped that one in the bud pretty quickly.

Instead, the Gerindra campaign response has bizarrely been to ramp up Prabowo’s sexual appeal: imagine PKS taking over your RSVP profile and you get what I mean. Yesterday, after a strategy meet up, PAN’s Amien Rais gave a press conference insisting that Indonesia’s Muslims should pick a handsome, wealthy candidate for president, while PKS’ Anis Matta cited the Hadiths and reminded the umat that the prophet was something of a looker too.

Back in the Jokowi camp, all the online snarking climaxed on Metro TV on Wednesday with Aiden Napitupula’s final riposte that Prabowo’s only two redeeming qualities are that a) he rides a horse well and b) that his single status gives the women of Indonesia hope that one day they might make first lady.

Ladies of Indonesia, to fuel your conjugal aspirations, allow Jokowi’s Vice Presidential candidate Jusuf Kalla to introduce you to the delights of being a political wife. ‘When I get up, my wife has already readied my drink. I go to the office, she sorts out my shirt and the kids. When I come home tired, she’s there and she gives me a little massage’. Thanks JK, you’ve really sold it.