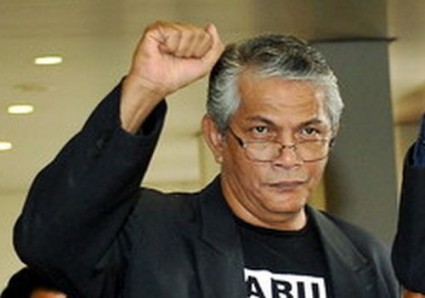 The venue for this seminar has been changed to:

The Government of Australia has approved a visa for Mr. Haris Ibrahim to visit Australia. While in Australia, Haris Ibrahim has graciously agreed to give a seminar at the Australian National University where he will discuss the topic “Opposing authoritarianism in Malaysia.”

In this seminar, Haris Ibrahim will reflect on his long experience in organising political reform and rights movements in Malaysia, such as Article 11, the People’s Parliament, Bersih, Saya Anak Bangsa Malaysia (SABM), Malaysian Civil Liberties Movement (MCLM), Anything But UMNO (ABU) and BlackOut 505 movements. He will discuss some of the successes and failures, as well as offer insights into the future struggle against authoritarianism in Malaysia.

A trained lawyer, Haris Ibrahim is the founder of ABU (Anything But UMNO), a civil society group in Malaysia seeking to overthrow the current ruling government through democratic means. He is a strong advocate for a government that delivers its promises for all Malaysians. Launched in 2011, ABU aims to expose fraud and corruption committed by the ruling coalition government, and hold lawmakers in parliament accountable for their actions. Haris also hopes to reinforce ABU’s mandate of being pro-rakyat (pro-people) and not pro-Pakatan Rakyat (PR).

This event is hosted by the Department of Political and Social Change.