"Ojek by another name" (photo by Carol Mitchell on FlickR, CCL)

Not so long after a viral tweet by an underpaid freelance teacher at Ruangguru, drew attention to the education-based technology company’s exploitation of interns, Indonesia saw strikes and massive protests from couriers for Shopee,  a leading e-commerce start-up in South East Asia. Ironically, amidst mainstream media attention to the resilience of the country’s logistics sector during the pandemic, its unsung heroes have to pour on the street demanding better pay.

Freelance teachers, door-to-door couriers and ride-hailing drivers, regardless of their educational background, are part of a precariat workforce who have had their social privilege rampantly stripped away. They are kicked into a basket of talent-pools whose livelihoods are on-demand.

The gig-worker caste is even arguably lower than the blue-collar workers whose labour-related security is protected by the No.13, 2003. They have almost no  labour-related guarantees, whether employment security, income or social protection, leaving them in precarious conditions.

Their social security does not come freely as part of their rights. Instead, it is a product which depends on the willingness of the workers to pay. No wonder protests have emerged.

Shopee couriers joined their ride-hailing counterparts who have long demanded better livelihoods through street rallies and social media protests. Ride-hailing drivers firstly raised their voices to question the value creation of digital companies. To understand the logic behind newly digital start-ups, we need to  view their origins.

Based on underlying infrastructure

The precarious labour market has long been a part of Indonesia’s informal economy. This untapped market attracted digital companies and their venture capital to leverage value. This phenomenon is even more tangible in emerging markets in countries where the market infrastructure (i.e. regulation) has not been fully developed, leaving loopholes for companies to exploit.

Since the innovation bred by technology companies relies on the underlying market infrastructure of the informal economy, it is also built among the infrastructure’s persistent issues. The underpaid teacher of RuangGuru perfectly reflects the poor welfare of contractual teachers in Indonesia. A survey from the Indonesian Teacher Federation Union (FSGI) found there are still honorary teachers who live on IDR 300.000/month (USD 20), not to mention the irregular schedule of payment.

Predatory pricing of ride-hailing platforms reflects the free market of conventional motorcycle taxis (ojek). The fare of conventional ojek has never been regulated ever since its inception in the 1960s, leaving the price up to drivers’ monopolies. Ride-hailing companies such as Gojek, Grab, and Uber benefit from this free market by offering extremely low prices compared to conventional ojek services, overwhelming competitors and eventually creating a duopoly of digital platforms, Gojek and Grab. No wonder the tariff war between Gojek and Grab could push prices as low as IDR 1.500/km (USD 0.1/km) before the government stepped in to regulate the price after  a series of massive protests by drivers.

The poor working conditions of Shopee couriers represents the Logistic Performance Index (LPI) of emerging market countries whose scores are lower than developed market countries. 2018 data from the World Bank shows that Indonesia’s LPI score was 3.67, similar to Vietnam: better than India at 3.50 but lower than Thailand and much lower than Germany (4.39) or Japan (4.25).

Instead of fixing structural barriers in the logistic sector,  efficiency is forged at the expense of workers’ wages. Consequently, strikes are unavoidable in emerging markets. Vietnam too experienced street rallies by delivery couriers from two logistic platforms, Now and Grab, in late 2020. Recently India faced protests from Amazon’s riders due to tariff cuts. 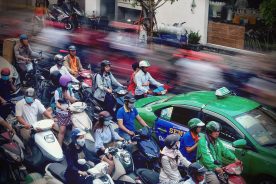 These actions by app-based drivers indicate an informal but sophisticated level of workers’ self-organisation.

The classic proverb “the customer is king” remains correct. The long struggle of Indonesian gig workers has been contested by platforms supported by venture capital giants. The protestors’ ultimate goal is to have the state step in to provide legal standing, social protection, and regulation of the long-abandoned informal economy. The long-tail economy characteristic of digital platforms will always search for opportunities to expand its reach. No wonder Gojek has evolved from merely a ride-hailing app to a super app platform, or that Shopee has initiated their own delivery fleet.

However, waiting for the state to react and regulate will surely take time due to inflexible and rigid bureaucracy. This is even more challenging under the newly legislated pro-investor “Job Creation Law” in Indonesia. For labour activists, grabbing customers’ attention may be a quick win to pave the way to the ultimate goal.

In this prosumer era, consumer preference is key for a businesses to thrive. The flexible market doesn’t only bring advantages to producers but also consumers. Almost two decades ago people were satisfied with a brick-sized monochrome Nokia not because they loved its design or its snake game, but merely because they were out of options. Nowadays, it is easy to turn away from Ruangguru or Shopee due to the lack of their services compared to their competitors, or because of their treatment of workers.

Conscious consumers should  identify company behaviours and force change should business practices be unfair or harmful. Gig workers should maximize all channels, especially through social media, to have their demands recognised by customers. The struggle will not be easy, since it will be challenged through both market and non-market approaches by digital platforms. Shopee, for instance, plays the promotional card to influence consumer behaviours, while Ruangguru gives away trending products.

The non-market approach is particularly widely adopted by ride-hailing platforms who write up stories of their comparative advantage as an inclusive economy, such as by incorporating women and disabled people who are normally marginalized in the production sector. With all due respect to the positive efforts at job creation and inclusivity upheld by digital companies, the precarious working condition surrounding this business should not be swept under a pretty rug of public relation campaigns.

Demanding action from the state

Increasing number of so-called partners comprised by gig workers of digital company businesses is undeniably good for government to increase the job creation. The job creation benefit, nonetheless, must be accompanied by strong support of the state to ensure a win-win solution between the government, companies, and digital gig-workers. Failing to do so will lead to unequal distribution of rewards of the digital economy’s value creation.

The first intervention needed is in the aspect of legal standing . Blurry definitions of work and contractual agreements between digital platforms and partners will create long-term harm if not regulated by the government. If the platforms’ workers are categorized as independent contractors, the unilateral concept of platform’s terms of service, which normally conceal unequal clauses for partners, will be the sole base of the employment agreement. As a solution, enacting a collection of rights relating to platform-specific tools by legislation or collective bargaining is strongly recommended. California Assembly Bill 5 (AB5) in the US is an example of this.

AB5 obligates digital platforms to classify their partners as an employee, not a contractor, unless the following conditions are met: (A) the individual is free from direction and control applicable both under the contract for the performance of service and in fact; (B) the service is performed outside the usual course of business of the employer; and (C) the individual is customarily engaged in an independently established trade, occupation, profession, or business of the same nature as that involved in the service performed. In Indonesia, government may explore possibility to amend the Indonesian Labour Law or issue ministry-level regulation to enforce this term. Classifying all partners as employee will for instance, enable access to social benefits for Indonesian digital economy workers, as the law guarantees this.

The second urgency for long-term solution is introducing a social insurance scheme for gig workers. The scheme must be redistributive in nature and a government subsidy is desperately needed. Informal and gig economy workers lack the financial resources to set up private accounts to cover health, unemployment benefits, and their pensions. Strengthening the ongoing social safety net programs of the government, such as universal healthcare (BPJS Kesehatan) and pre-employment cards (kartu prakerja) for unemployment benefits, is essential to cover any gaps should businesses be unable to contribute. Recognizing the gig-workers’ struggle through consumer awareness and state support are indeed as-yet-unattained goals, still sought by all Indonesian gig-workers. 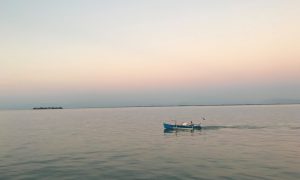