First President Soekarno and Chairman of the Indonesian Communist Party D.N. Aidit at the 1963 celebration of the party's anniversary.

Fifty years ago, when I began to do research about Indonesia, the main question among concerned activists and scholars was how the world’s largest peaceful popular movement, with the Communist party (PKI) and President Sukarno in the forefront, had collapsed and been eliminated. Now, finally, most of what happened is beyond doubt. In brief, the West, led by the U.S., had in the late 1950s lost faith in the weak middle classes, and added support of the military as a bulwark against radical popular demands. The new strategy was legitimised by Professor Samuel Huntington’s argument that there was a need for a “politics of order” to foster not just economic but also “political development”. The result, however, was “middle class coups” throughout the Global South. In the pioneering Indonesian case, this came with a twist. PKI Chairman D.N. Aidit had found no other way to counter the military threat but to encourage in secret a “30th of September Movement” among critical officers to arrest the leading generals, expose their manoeuvres and back up Sukarno with a revolutionary council. This failed and played into the hands of General Suharto and his henchmen, who took command, ignored the President and instructed the military, other organs of the state and loyal civilians to annihilate not just the officers’ movement but also whoever was deemed supportive. A secret conspiracy by a party leader and some dissident officers was thus made the pretext for an extremely violent campaign (involving the killing of between 500,000 and 1 million people) against the party, related mass organisations, and the activists’ families and relatives—and probably none of them were aware of Aidit’s plot.

But while this is now clear, another mystery remains unresolved. Why has not the uneven but thorough expansion of capitalism in Indonesia since 1965—and partial democratisation since 1998—produced the revival of a notable leftist dimension in social and political life? There is not even a small social democratic party in parliament—in contrast to other places, such as Spain, Germany, and parts of Latin America, who have experienced similarly brutal and extensive repression.

It was inevitable that this puzzle be addressed when applying a long historical perspective, from the second anti-colonial period through to the third liberal wave of democracy, in a concluding book, In Search of New Social Democracy. And when posing the question in retrospect, it was clear that although many of the challenges for progressives since 1965 were similar to those in other southern countries—including politically driven uneven development with a fragmented class structure, elitist democratisation, disjointed civil groups and social movements, as well as populist dead-ends—two background factors were unique. One was the character of the subjugation and killings; another was leftist loss of memory about the background. I shall argue that a major cause for the absence of a new Left in Indonesia is the rejection in the late 1950s, and later on its oblivion, of the previous focus on equal civil and democratic political rights, and the struggle for social rights based on these bedrocks too.

A major controversy about the killings is whether they constituted a genocide or not. The first of two main counterarguments is that the mass murders were not centrally coordinated but mainly due to local conflicts and carried out by angry mobs. This is now refuted. As documented by Jess Melvin in particular, there were central command structures and immediate orders of annihilation. From case studies with long historical perspective, by John Roosa and others, it is also clear that while there were various kinds of frequently intensive conflicts over the years, there were no serious incidents of mass terror and mass murdering—until propelled by the military.

The second rebuttal is trickier. The UN definition of genocide from 1948 only mentions killings of groups based on nationality, ethnicity, race or religion, not of political enemies such as by Stalin, and not necessarily of people resisting western colonialism. However, for genocide to remain a useful concept, it needs to be acknowledged that the definition was politically negotiated, remains analytically dubious and needs to be improved by the common knowledge that national, ethnic and religious groups are often politically delineated, and that this heterogeneity applies to non-religious people too. In fact, the organisationally modern and “industrial” genocides in the North were rooted in Europe’s own previously mainstream colonial classification of various kinds of “natives” who were thus subjects rather than citizens and deemed less worthy humans who may be removed if necessary. This is almost exactly how the Indonesian military, immediately after the failure of the 30th of September Movement, undermined the radicals’ ideological hegemony with fabricated lies and by demonising them as uncivil and anti-religious national traitors who had to be annihilated.

While the Indonesian identification of the victims was thus in line with Europe’s own colonial practices, Jakarta’s methods of governance differed from the organisationally modern and “industrial” slaughters, such as the Holocaust, through extensive state apparatuses and the leaders’ own parties and militias. The Indonesian military leaders were certainly in command of the killings but could not rely on similarly extensive and coherent machinery and on civilian organisations of their own. This generated regional differences with regard to timing, the numbers killed and the contribution of “external” vigilantes and militias. For example, the central dictates come with early military direction of the slayings in Aceh; late killings of different numbers of people in South Sumatra and Riau; firm military detentions but few killings in West Java; brutal central military intervention along with local anti-communist groups in the progressives’ own bastion of Central Java; extensive military and civilian participation in vast killings in East Java; and delayed central military direction of slaughter in the nationalist stronghold of Bali.

Yet these differences do not suggest that the military were backseat drivers overwhelmed by local conflicts and angry civilians “running amok”. The new historical studies combining documents and interviews with observers, perpetrators and surviving victims point instead to a clear pattern with two components. The first component was central dictates supplemented by interventions when local commanders and governors were not trusted, as in Central Java, or when following Sukarno’s instructions to avoid killings, as initially in Bali, South Sumatra and Riau. The second component was the combination of this central command (plus special forces) with colonial-like indirect rule through local communal leaders and their anti-communist vigilantes and militias, often Muslim, as in East Java, but also right-wing nationalist in character, as in Bali. Only in West Java did officers manage to sustain direct professional rule, akin to modern crackdowns, carrying out mass detentions but abstaining from extra judicial slaughter.

With regard to indirect rule, there was also a clear sequence. The initial pogroms and killings were in the open and, while facilitated by the military, often involved anti-communist vigilantes and militias. They were thus given prime attention by many observers. The progressives were unprepared and without any instructions other than to stay calm and rely on President Sukarno’s ability to resolve the crisis. Meanwhile the military focused on large-scale detentions, again assisted by the vigilantes and militias. At times, the local progressives preferred detention to mob violence, hoping for decent treatment by the authorities. However, the most extensive massacres thereafter were by non-public executions of “disappeared” detainees, carried out by the centrally directed military, assisted by militias. This was avoided in West Java but otherwise applied generally, such as in East Java, where Muslim task forces were particularly active, in Central Java, and later on in Bali where it took until December 1965 for the central military to intervene and organise perhaps the most horrendous killings in the country, in co-operation with right-wing nationalist militias.

In conclusion so far, the Indonesian selection of the victims was thus similar to the one applied in Europe and was inspired by colonial ideas. But in terms of method, Suharto and his henchmen lacked modern statist organisational and “industrial” means of repression and killings or parties and militias of their own. Rather, they combined colonial state despotism with local indirect rule. As Gerry van Klinken has drawn my attention to, this was akin to when the Dutch contemplated more modern forms of governance in the 1920s, but needed help to suppress the liberation movement and therefore returned to governance by central despotism allied with the affirmation of strongmen and local leaders of communities mediating unequal citizenship and control of their “subjects”.

Back in Indonesia from the 1960s, there were two major implications for the progressives. Firstly, that since the primacy of colonial-like governance is dividing and ruling through competing ethnic and religious identities, loyalties, leaders and their vigilantes and militias, achieving popular unity for common causes and interests is very difficult. Secondly, that while modern dictatorial regimes tend to crumble along with their state apparatuses and organisations, as in Germany, Chile or the Soviet Union, much of the indirect governance redolent of colonialism has survived its demise. The same applied after the Indonesian genocide. When in firm control from the late 1960s, Suharto certainly tried to combine his own despotism with modern central governance. But in face of critique from the late 1980s, he revived elements of indirect governance with Muslim leaders. And similar practices have proliferated during the elitist democratisation from 1998.

In short, just as it was particularly difficult for the progressives to withstand repression and killings, reviving the Left after 1965 was equally formidable.

Return to New Mandala tomorrow to read the second part of this article, in which Prof. Törnquist examines why reviving the Left in Indonesia has been such a difficult task. 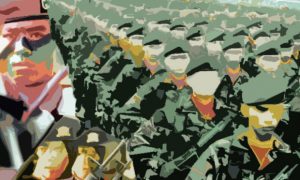