We’re delighted to introduce readers to the six young Indonesian researchers who will join our team as Correspondent Fellows throughout the upcoming Indonesian election campaign. These Fellows will contribute to a series of research-based articles at New Mandala that highlight the development policy challenges that are being contested—or neglected—this election, and how democratic competition is in turn influencing how such policy is made and carried out in Indonesia today.

The Indonesia Correspondent Fellows program is supported by the Knowledge Sector Initiative (KSI), a joint Australian and Indonesian government project funded by the Australian Government’s Department of Foreign Affairs and Trade (DFAT). Click here for more information about KSI. The program is convened by Dr Ross Tapsell from the ANU School of Culture, History and Language. The series will be edited by New Mandala’s editor, Liam Gammon, with the assistance of Cassandra Grant and Levriana Yustriani. 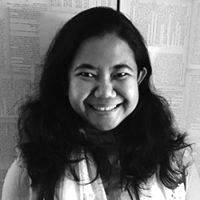 Dr Ade Prastyani (Asty) is a medical doctor, who received her medical training at Universitas Indonesia. She completed a postgraduate training in medical anthropology at the Australian National University. Her past and present work as an academic and researcher revolves around three major topics, namely primary health care, tobacco control, and mental health. At New Mandala, Asty will be writing about poverty and inequality. [Disclosure: in 2018–19 Asty has a contract to provide research services for TP2NK/National Team for the Acceleration of Poverty Reduction, an Indonesian government agency.] Azis Anwar Fachrudin is a researcher at the Centre for Religious and Crosscultural Studies (CRCS) at Universitas Gadjah Mada, Yogyakarta. After finishing his bachelor’s degree in Arabic literature at Sunan Kalijaga State Islamic University in 2013, he obtained his MA degree in religious studies at CRCS in 2016. At New Mandala, Azis will be writing about Islam and social change and its effects on public policy. Aichiro Suryo Prabowo is an economist, currently teaching at Universitas Indonesia. He holds a master’s degree in public policy from the University of Chicago. He has acted as a consultant to the Economist Intelligence Unit and the World Bank in Jakarta. His opinions have been featured at the Jakarta Post and the Huffington Post. At New Mandala, he will be writing about infrastructure policy. Dyah Ayu Kartika (Kathy) is a researcher for The Center for The Study of Religion and Democracy (PUSAD Paramadina), Jakarta. She previously worked as researcher for Indonesia’s National Commission on Violence against Women (Komnas Perempuan). She received her Bachelor of Psychology from Universitas Indonesia and continued her study in Development Studies, majoring in Human Rights, Gender, and Conflict Studies: Social Justice Perspective in the International Institute of Social Studies, Erasmus University. At New Mandala, she will be writing about gender issues in development policy. Emilianus Yakob Sese Tolo is a staff member of Politeknik St. Wilhelmus Boawae, Flores, East Nusa Tenggara (NTT). He majored in Philosophy as an undergraduate at Catholic Institute of Philosophy Ledalero, Maumere, Flores. He obtained masters degrees in Public Administration at Universitas Gadjah Mada and in Development Studies at the University of Melbourne. His research is in the issues of decentralisation, agrarian change, and migration. At New Mandala, he will be writing about development issues in Eastern Indonesia. 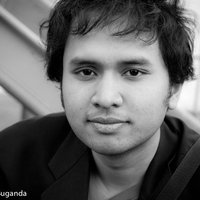 Dr Iqra Anugrah is a Research Associate at the Institute for Economic and Social Research, Education, and Information (LP3ES) in Jakarta. He holds a PhD in Political Science and Southeast Asian Studies from Northern Illinois University. His research focuses on agrarian politics in the changing context of development and state-society relations. At New Mandala, he will be writing about environment and natural resource issues.

Editor’s note: New Mandala accepts grants on the condition that the donor organisation has no role in our editorial decisions—New Mandala’s editors remain totally independent. Because of this, the views contained in the fellows’ articles will represent their own opinions and should not be taken as representing the views of KSI, DFAT, the ANU, or of New Mandala’s individual editors. 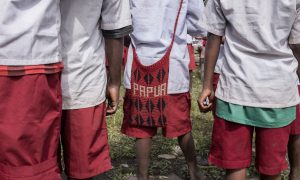 Education on the fringe in Indonesia

A snapshot of the problems of Indonesia's education system from highland Papua.