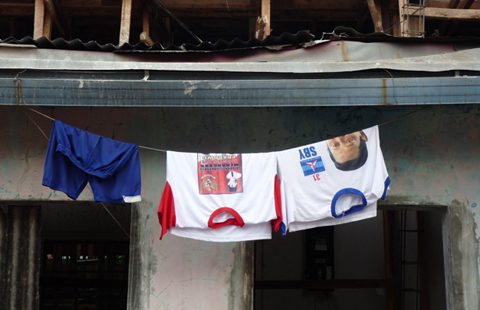 Jokowi and Prabowo reflect a decade of frustrations with SBY Has Indonesia been left hung to dry under SBY? Photo by Jacqui Baker.

The rise of Jokowi and Prabowo can be explained by SBY’s inability to get things done and show leadership, writes Jeffrey A Winters.

On the eve of Indonesia’s presidential election, the gap between Joko Widodo (Jokowi) and Prabowo Subianto has closed dramatically. Jokowi’s popularity peaked months ago and has eroded steadily ever since. Prabowo’s popularity has trended strongly upward over the same period.

His Gerindra coalition got an extra boost at the end of June when Partai Demokrat officially declared its support for the Prabowo-Hatta ticket. In a race dominated early by Jokowi, the momentum increasingly favors a Prabowo win.

Roughly a fifth of Indonesians remain undecided. If they are truly unable to figure out which candidate they prefer, there is no compelling reason to think they will end up surging strongly in favor of either candidate – unless something very dramatic happens in the final days of the campaign, which is unlikely.

Time and national campaigning have clearly worked in Prabowo’s favor. In hindsight, Jokowi would have benefited greatly had the presidential election been held simultaneously with the parliamentary vote back on 9 April. The Constitutional Court decided in January that parliamentary and presidential elections must be held on the same day. But the Court delayed the implementation of the ruling until 2019 – due, in part, to fierce pressure from PDIP, which the party now likely regrets.

Several New Mandala pieces have examined the candidates, their backgrounds, their campaign machines, the obvious controversies and risks, and whether the country is moving forward or backward.

I’d like to focus on a slightly different question: Why these two figures, and why now?

Factors like money, oligarchic power, party alliances, and campaign tactics matter. But this tight contest also reflects important sentiments in the Indonesian electorate. What do the people want and why do they want it?

Context matters. It is impossible to account for the rise of Jokowi and Prabowo, or explain why they are the last two candidates standing, without reference to ten years of dissapointment with Susilo Bambang Yudhoyono.

It has been a long slog under SBY’s presidency. The rhetoric has been thick and the preening has been non-stop. For extended periods, one had the feeling the country was stuck in the mud, wading through molasses, or sinking to the nostrils in quicksand.

One way to understand the choices Indonesians are making is to start from the two most colossal failures of SBY’s presidency — his inability to follow through and get things done, and his incapacity to show leadership and make tough decisions.

These failures are related but distinct. And Jokowi and Prabowo reflect a response to deep frustrations in these two areas.

Jokowi consciously presents himself as the ultimate administrator and a master of managerial competence. He examines how things are (not) working, diagnoses problems, and focuses on how to get things moving. He displays his greatest passion when yelling at slothful bureaucrats and administrators. He perks up when talking about “systems” in a way few people can. His oratory is about nuts and bolts.

Jokowi wants to put a responsive apparatus in place. His solution to a broken corps of civil servants is to replace them with as much e-government as possible. Bureaucrats can’t slow down, screw up, or steal from administrative processes they never touch.

They will all still hold their jobs and get paid (attrition will be by retirement and nonreplacement). But instead of doing barely any work and lots of damage, civil servants will do even less work but also inflict much less damage. Plenty of Indonesians, particularly in the cities and in business, immediately recognize what a net gain this would be.

Government via the Web is the ultimate Weberian bureaucratic leveler. And cutting back on the petty taking and squeezing that scores of millions of Indonesians endure year round (amounting to enormous sums) would represent a revolutionary change, even if packaged as technocratic tinkering.

If this were SBY’s only failure, Jokowi would probably win by a landslide no matter who he faced. But a managerial-systems solution doesn’t resonate with all voters, especially those who don’t use computers and websites, or are unclear about what e-government is. For many Indonesians, administrative competence is simply not enough.

Enter Prabowo. His electoral success is often linked to nostalgia for Suharto. But a significant percentage of Indonesia’s voters were children or teenagers (or not even born) during the years when Suharto was at his dictatorial best. His final decade, especially after his wife died, lacked pep. His declining years in office were memorable for how indecisive he was, particularly when it came to controlling his predatory children.

A better and more proximate explanation of Prabowo’s popularity rests on SBY’s second major failure – his chronic inability to make decisions, take risks, or show leadership. Indonesians are painfully aware that fundamental changes are needed. And they do not hold back when expressing their frustration and disgust with SBY for delivering a lost decade. 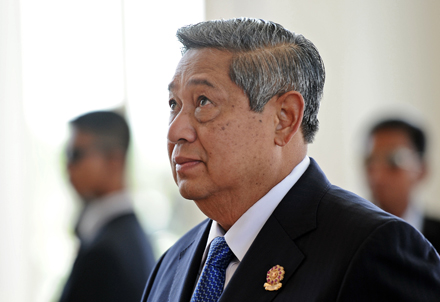 While SBY dithered, the country has essentially stood still, which is to say it has lost ground with regard to major competitors globally. The rupiah is weak again. Manufacturing as a percent of GDP has declined year after year. The country continues to rely the extraction of non-renewable resources. The domestic market is flooded with imported goods from China that Indonesians ought by now to be making themselves. Irrigation systems in the countryside are in serious disrepair. And barely any new infrastructure was completed during SBY’s presidency.

Depending on how you see things, you might be attracted to a Jokowi solution to the suffering this gross mismanagement has caused. But lots of Indonesians will tell you that nothing will get done, and there will be no break-throughs, unless someone strong and “tegas” (firm) is in charge.

This desire for a tough leader troubles elite observers both in Indonesia and abroad. It is puzzling that millions upon millions of Indonesians could be drawn to a thundering figure like Prabowo (who has nearly lost his voice from campaigning, while Jokowi still sounds normal). His campaign style alarms almost as many Indonesians as it excites.

As Prabowo presents a message of firm resolve and calls for national dignity, it is noteworthy that he rarely references Suharto. Maybe this is because much of the “bocoran” (leakage) he refers to – whether the pandemic corruption or the vampire fangs major foreign extraction companies have plunged into the country’s neck – really took off under his former father-in-law.

His conscious strategy is to emulate the nationalist style of Sukarno, right down to “berdikari” (stand on our own two feet).

Many observers comment on how dramatically Prabowo’s rhetoric changes depending on the audience he is addressing. The style and content certainly shift, and he even switches languages. But what doesn’t change is the basic message that Indonesia is facing daunting challenges that he portrays as tantamount to fighting for independence against the Dutch, and that nothing short of tough, passionate leadership will meet the challenges.

Whether Prabowo champions this message because he really believes it, or because he knows it resonates with a large swath of profoundly frustrated voters, is obviously relevant for the coming five years. But the only thing that matters for both candidates on 9 July is winning votes. And you win the presidency in a contest like this because you can tap into the frustrations and hopes of broad segments of the population.

Jokowi and Prabowo are consciously presenting the Indonesian electorate with a stark choice of tone and solutions to the country’s problems. But both are positioning themselves in different ways as the antidote to SBY.

Rhetoric and campaigning aside, it is an entirely different matter whether either of these candidates has a chance of succeeding with their stated agendas in the face of entrenched power relations and interests across the country. Given the composition of their teams and the political alliances each has forged, there is good reason to be skeptical.

Jeffrey A Winters is professor of politics and director of the Equality Development and Globalization Studies program at Northwestern University.