Jokowimania: a dispatch from Southeast Sulawesi Much of Sultra is made up of small, isolated villages. Will Jokowimania allow PDI-P to make inroads in far-flung regions of Indonesia? Author photo.

Southeast Sulawesi (Sulawesi Tenggara, or ‘Sultra’) is one of the few PAN strongholds in Indonesia. Since Governor Nur Alam came to power in 2008 a National Mandate Party candidate (Partai Amanat Nasional, PAN) has won almost every district election. Cashed up from his private contracting businesses, the fortuitously timed nickel boom that hit Sulawesi around 2007, and his close relationship with Hatta Rajasa (Head of PAN and Coordinating Minister for Economic Affairs), Nur Alam has managed to turn PAN into a formidable political force in Sultra.

Most people here believe PAN will clean up in April’s legislative elections. In 2009 they won one seat in the national parliament with just over 12% of votes, well behind Golkar and the Democrats. But now the eight sitting PAN Bupati (regional heads) can leverage government resources, both financial and political, in support of their local candidates. Governor Nur Alam’s skilful political hand and significant financial reserves helped put many of these Bupatis in power. Locals agree that the Governor and these district leaders will spare no expense to ensure PAN candidates fill the district, provincial and national legislatures. 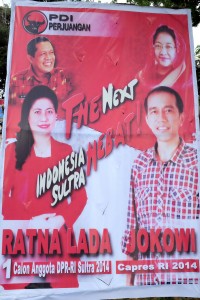 But another party’s candidates are adamant they stand a chance. On the eve of the official campaign opening, a group of young PDI-P party members chat quietly on the steps of a large gated house in Kendari, the capital of Sultra. They are waiting for Pak Hugua, Bupati of Wakatobi and head of PDI-P Sultra, and his wife Ibu Ratna, who is contesting a seat in the national legislative assembly, the People’s Representative Council (DPR). It’s 10 o’clock at night but with Jokowi’s presidential nomination barely 24 hours earlier, no one here is tired.

I ask the group how PDI-P’s campaign is progressing here in Sultra and their excitement is palpable. Ahmad, a card-carrying member of PDI-P, believes the party is on its way up. PDI-P is historically one of the weaker parties in the province. Aside from Hugua, there are no PDI-P district heads out of the 14 districts, they hold only two seats in the provincial parliament and they won just around 6% of votes in the 2009 legislative elections for the DPR.

But Ahmad says that under the leadership of Pak Hugua and with the figure of Jokowi behind them, PDI-P is growing in popularity across the province. Ita agrees. She is running for a seat in the district legislature of Konawe. When Ita goes door-knocking in her electorate, in the isolated outer fringes of Konawe, the first thing she tells voters is that she is with PDI-P. People immediately respond with, “O yah, Jokowi!” and welcome her into their home. A door-to-door salesperson in her village, Ita does not have the profile usually associated with political office in Indonesia. She has no family connections to the government bureaucracy and little money behind her campaign. But Jokowi’s candidacy has raised Ita’s hopes of winning votes in the villages of Konawe. When Hugua arrives at the house a troop of national and local media follow him inside. Hugua is one of Sultra’s most high profile political figures. Bupati of Wakatobi for two periods, Hugua is famous here for his open style of leadership, charisma, and his background in environmental activism and community development work. He’s also known for skilfully attracting foreign donors, both for community development projects and his political career.

Party members I’ve spoken with enjoy comparing Hugua to Jokowi and claim the two are close. Both Jokowi and Hugua are known for their creative and green government initiatives, and both were invited to sit on the United Nations Committee for Local Authorities. It’s not just the Jokowi phenomenon that has given PDI-P fresh legs; these young party members feel Hugua has reinvigorated a grass roots approach to mobilising votes, and that party members down at the village level have new energy and motivation.

The press conference, of course, is all about Jokowi. What does Jokowi’s candidature mean for PDI-P Sultra? How will Hugua mobilize the province to support Jokowi? Will it affect the number of seats PDI-P gets here in the legislative elections? And when is Jokowi to visit Kendari? 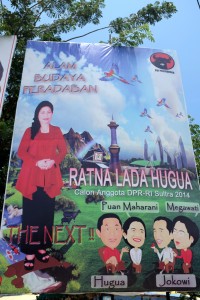 Hugua is careful not to rest all the party’s hopes upon the presidential candidate. PDI-P was already becoming more and more popular in a province tired of money politics and corruption, he claims. The implication is that PAN’s tight grip on political power has been achieved and maintained via undemocratic means–a refrain heard often when speaking to Sultra residents, local media and the political opposition. But Hugua is indeed convinced that with Jokowi’s nomination for president, PDI-P can get two seats in the national legislature and more in the provincial and district legislatures than originally hoped.

I ask whether people here actually know much about Jakarta’s popular governor. Of course, Hugua responds. Then he tells the packed room this story: “I was in the villages just this week campaigning with my wife, and I asked the people whether they had heard of Joko Widodo. ‘Of course! Jokowi!’, they responded. ‘O yah?’ I asked, ‘Are you sure you know him? Jokowi, the fat guy from Jakarta?’ I said. They all shouted at me, ‘No! He’s skinny, just like us!’ You see people here know him and they love him.”

La Ode Ota, another senior environmental activist in Sultra is also running with PDI-P for a seat in the national legislature. Only just back from two weeks in the villages of Konawe Selatan, Ota paints a similar picture. Villagers’ reactions to Jokowi give him goose bumps, he tells me. Ota will certainly take advantage of the Jokowi phenomenon–he is already telling voters to choose PDI-P and help Jokowi win the presidency. But it’s not as simple as telling the electorate to vote PDI-P. The open-list voting system means that candidates from the same party must compete against each other, as well as other parties. This means Ota is running against Hugua’s wife and three other PDI-P candidates for the same seats in parliament. Parties usually have a good sense of how many seats they are likely to win, so candidates from the same party will often see each other as the number one enemy and run negative campaigns against their peers. Even if Jokowi is beginning to mobilise an electorate disillusioned by corruption, the local party branches are not necessarily unified. With little funding or strategic direction from the party’s central leadership (as is the case with most Indonesian political parties), PDI-P in Sultra still does not feel like a force to be reckoned with. Other parties don’t appear to see them as a serious threat. They will all use Jokowi in their campaigns, but otherwise PDI-P candidates are fragmented, and it’s unclear how they will differentiate themselves from party peers.

The upcoming legislative elections will be a fascinating test for how far the Jokowi phenomenon can be leveraged by the PDI-P in Indonesia’s far-flung provinces. In Sultra, PDI-P candidates would appear to have a seriously uphill battle ahead of them. If the PDI-P can cut into Sultra’s political scene, where cash for votes is common and Nur Alam’s political machine is hard at work, it will be a spectacular confirmation of the Jokowi effect.

Eve Warburton is a PhD candidate at the Department of Political Social Change at the Australian National University. She is currently conducting field work in mining regions as part of her research on the politics of resource nationalism in Indonesia.