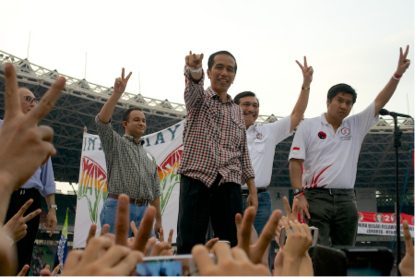 The official campaign period for the upcoming Indonesian presidential election ended on Sunday 6 July. So Saturday was the last day for presidential candidates to make a final splash on their campaign trail.

The Jokowi-JK team has been known for taking some unusual approaches to their presidential run. Their last campaign at the Bung Karno Stadium was no exception: instead of calling it a Kampanye Akbar – the term Prabowo-Hatta used when they held their big campaign at the same location on the 22 June – Jokowi’s team decided to not even call it a campaign.

The event is officially known as Konser Salam 2 Jari – or two fingers greeting concert, named after the iconic two fingers greeting that represents Jokowi-JK’s registered number, 2. The organisers of the concert called it a free concert for all, featuring well-known artists like the pro-Jokowi rock band Slank. There’s no mention of attending political figures on the poster. The campaign team even went as far as to ask its supporters to not bring items representing political-parties to the concert.

The atmosphere at the front stage was amazing. It was almost occupied entirely by Slankers – nickname for the fans of the rock band Slank. Everyone piled on top of each other in an extremely tight space. Everyone was drenched in sweat and the whole front stage area felt like a sauna. But when they got squeezed by the crowd, instead of voicing annoyance, the Slankers just smiled. Slogans like Indonesia as one (bersatu) can be heard a lot in both Prabowo and Jokowi’s campaigns, but this was one of the few occasions where it actually felt like we were as one. Regardless of our ethnicity, religion, socio-economic background, or political affiliation, we were all there celebrating at a party of democracy as one.

Slank took to the stage to perform two of their hits. This caused an explosion of passion at the stadium. Virtually everyone was jumping up and down at the front stage.

The star of the concert finally arrived in his iconic chequered shirt and a pair of sneakers that he would wear later at the final presidential debate. Jokowi had a bit of problem with microphone, and spent some awkward moments fiddling with it. When he took out an A4 size note to read to the audience at a “concert,” I was not too impressed – this was a 100,000-strong concert and Slank just warmed up the crowd for you, surely he could do better than reading from the script almost the entire time? The people around me kept shouting loudly “Pak, belok kanan (Sir, turn to the right).” Jokowi never turn to the right, but the demands from the audience made everyone laughed.

The speech Jokowi delivered was short and effective. There was no substance on policy so any attempt to use his last opportunity of speaking to 100,000 people to attack his opponent – that would be done during the debate later on. Jokowi’s message was clear: he wanted to spread goodwill and celebrate Indonesian democracy. “Spread kindness,” Jokowi appealed to the audience. “People do not need to believe in slanders and lies. We have all been hit by slanders and lies, but we never collapse because we are working sincerely for our beloved Republic.” “JK and I promise you that if you give us the extraordinary honour to be President and Vice President, then we will work hard every day for you, and for your children.” (You can watch Jokowi’s speech here).

Ray Yen Yu-Tzien is a graduate of the Australian National University’s College of Asia and the Pacific currently living in Jakarta.

At the concert, Jokowi entered the stage to deliver a maklumat (declaration), in effect, his closing statement on the campaign, and his final public appearance before the official cooling-off period during which no public campaigning is allowed. The speech was delivered with an emotional tone that was, unfortunately, rarely visible during Jokowi’s campaign. As he spoke, he frequently raised his almost trembling voice, as well as giving his iconic ‘two-finger salute’. (Jokowi-JK were assigned the number ‘2’ on the voting ballot.)

The original text can be found here. Watch a video of the speech here.

There is nothing in my life that makes me more proud than to stand here in front of you all. You are people who have worked hard, sacrificing time and energy, contributed thoughts and ideas, as well as the spirit to create a path of improvement and change for Indonesia.

You are all makers of history, and right now we are making history!

Thats the reason why I and Pak JK [Jusuf Kalla] stand here.

My appreciations to all who protect the values of diversity, at the mosque, at the church, at the [Buddhist] vihara, at the [Hindu] pura, and those who consistently conserve the traditional values of the archipelago.

Me and Pak JK don’t stand here because of appetite to rule, especially not by any means possible.

We practice democracy to listen. We come to help solve problems, not to create them. We come to give a feeling of peace, not to trigger conflict.

Brothers and Sisters, we gather to strengthen our determination, to join hearts, and to work hard as a responsibility to bring change for the improvement of Indonesia by civilised means

We gather here as a part of a democracy that ensures participation by the entire society to define the nation’s future, respect for human rights, struggle for justice and the nurture diversity and peace.

We reject all forms of intimidation, lies and cheating that rob the people of their right to define the future of Indonesia.

The people don’t need to believe in slander and lies. We have all been struck by slander and lies, but we don’t ever fall, because we work sincerely for our beloved Republic.

We are all sparks of hope for Indonesia. Our strength lies in our willingness. You willingly united, stood up straight, and worked hard to spread the message that there is nothing that’s not possible for change.

Once again, I and Pak JK are grateful to all volunteers, religious leaders, community leaders, activists, artists, farmers, fishermen, workers, teachers, public servants, students and all levels of society for uniting the will to guard the process of this presidential election for the sake of achieving a common vision.

To the young generation, my little brothers and sisters…you own the future of Indonesia! Allow me, your big brother, to invite you all to define the direction of Indonesia.

There is only one more step on the road. Guard your TPS! [voting booths]

I and Pak JK promise that if you give us the extraordinary honour to become the President and Vice-President, we will work hard every day for you, and for your children.