More on the Chinese in northern Laos

Further to my post on the Nam Tha dam it is interesting to examine some other aspects of development in northwestern Laos, and the extent of Chinese commercial influence.

According to the statistics of the Bokeo provincial office for tourism, 185,000 persons went through the border post of Huay Sai in 2006, either going to Thailand or entering Laos. Among them, nearly 50,000 were Lao, 70000 Asian (80% of whom were Thai), 57,000 European and less than 10,000 from American countries. While for the Lao and the Thai, Huay Sai is both a way in and out of Laos, the Europeans mostly use it as a way to enter the country. However, a substantial number of them do not even sleep one night there. Their tourist package includes a seat in a boat down to Luang Prabang on the Mekong prearranged by a Thai company, which also arranges accommodation for them in Chiang Khong, on the Thai side of the border. The Lao get only a small part of the trans-national business. Two Chinese tourist agencies have already settled in the centre of Huay Sai, but they operate from Luang Namtha (see picture above) rather than across the Thai border. While Huay Sai in itself has not changed that much (except some new big villas built on the hills), its atmosphere is made more cosmopolitan by the arrival of these Chinese tourists. They get out of their hotel in the morning to take few pictures of young blond farang backpackers sitting near the street with a cup of coffee who are themselves trying to capture images of young Lao children going to school … the tale of the biter being bit … or asymmetric conceptions of exoticism? 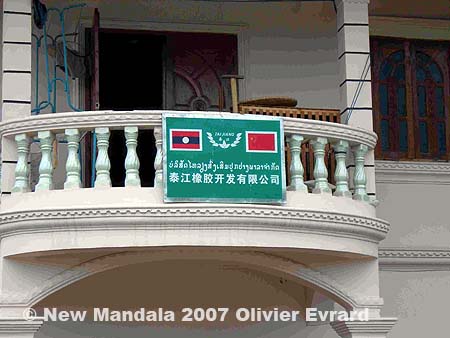 The Chinese companies do not only send tourists in Laos, they also play an important part in the local development, both in Bokeo and Namtha provinces. The case of the rubber plantations have been already mentioned here in New Mandala. In the two provinces of Luang Namtha and Bokeo, Chinese joint ventures (see pictures above and below) still extend the plantations, by offering special contracts to the farmers. The contents of these contracts can vary but most of the time, the Chinese offer the seeds and the fertilizer and in return they will retain 30% of the price of the sale while the remaining 70% will go to the farmers. A rubber tree starts to produce latex after 7 to 8 years and has a life-expectancy of 30 years. The Lao farmers seem quite happy about these contracts, and most of them have been convinced by the arguments of the Chinese companies, who said that in China, a family can have a decent life by planting only 30 rubber trees. However, some issues remain: will the price of the latex remain stable on the global market in the following year? What will be the consequences of intensive rubber plantations for the fertility of the soil? The Lao farmers do not have precise answers to these questions but they currently show a high degree of optimism.