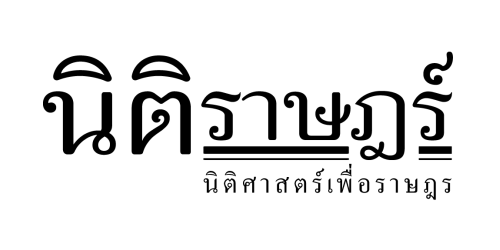 Seven law faculty members of Thammasat University[1] dropped a bomb on the fifth anniversary of the 2006 coup with a proposal to nullify all judicial decisions which were a consequence of the September 19 2006 putsch. The Nitirat Group’s plan has generated much opposition with regards to its constitutionality, practicality, motives and objectives. It also raised questions about Thailand’s past coups.

In the proposal available on their official website, the Nitirat Group raised four issues: [2]

It is clear from the numerous statements released by the Nitirat Group that, in their view, the origin of Thailand’s current protracted conflict stems from the September 19 2006 coup. While the group seeks nullifications of what seems like a wide array of decisions made by the coup-makers, their focus on the period from 19 to 30 September 2006 places their emphasis on specific bills passed by the Council for Democratic Reform (CDR) during this time as well as the interim 2006 constitution only. “We don’t want to revoke all decisions made post-coup simply because we don’t want to hurt innocent people,” states one of the Group members.[3] The Group argues that the CDR government acted much like the Vichy regime in France and thus deserves to be punished for their wrongdoing.[4]

The list of the opponents of the Nitirat proposal is much longer than its proponents. From Tah Prachan campus of Thammasat University to Army headquarters, the Nitirat proposal seems to raise more questions than answers. Within Thammasat itself, 23 law faculty members and the university rector, Somkit Lertpaiboon, have announced their objection to the Group’s proposal. Assoc. Prof. Taweekiat Meenakanit, a senior law academic, slammed the Nitirat Group as inexperienced, lost and lacking in-depth knowledge of the law. “These young ajarns studied abroad for 1-2 years and thing they know it all.”[5] Other law faculty members dismissed the proposal as “unethical, illegal and undemocratic.”[6] Opponents also include the usual suspects such as General Prayuth Chan-ocha, Sqd Ldr. Prasong Soonsiri, and the Law Council of Thailand.[7]

Peau Thai has, unsurprisingly, quickly embraced the Nitirat Proposal. The government announced it would take the proposals seriously and that it would be setting up a special parliamentary committee to study the matter. The party emphasized that it agreed in principle with the Group’s recommendations but that it has no direct connection with the Nitirat’s individual members. Other supporters, such as Ji Ungpakorn, Suthachai Yimprasert, and interestingly, Dr. Prawes Wasi, see the plan as a step in the right direction.

Much of the criticism towards this anti-coup proposal can be divided along two lines of arguments. One is a typical reaction to anything that could be deemed “pro-Thaksin”. The Manager Online has already labeled the Nitirat Group “Thaksin’s lackeys” and noted that the first Red Shirt Village in Bangkok is indeed on Tah Prachan campus.[8] The Manager’s cheap shot at the Nitirat Group shouldn’t be entirely dismissed, given the wider uproar this proposal has stirred. “Why now and why singling out the 2006 coup,” asked TU law faculty members who opposed the plan. Opponents argue that by referring to the September coup as the starting point for today’s political conflict, the proposal ignores what precedes the coup and what might be the contributing factors that gave rise to the coup itself.[9] The way this proposal targets the actions of the CDR casts doubt as to the motives of the Nitirat Group itself. “What they proposed is intended only to help Thaksin. They did not look back to see what Thaksin had done,” lamented Sqd. Ldr. Prasong.

A bigger debate, however, rests on the “slippery slope argument”. What would be the ramifications of the nullification of court decisions made by coup governments in a country that experienced so many coups in the past? How can we deal with what has indeed already happened? The Nitirat Group insists “it’s better late than never” and that nullifying actions of the 2006 coup makers will serve as a serious warning to future coup plotters.

The gist of the proposal is not new. There have been some discussions of redressing the consequences of the 2006 coup in the past. What the Nitirat Group proposed has, at minimum, reignited the debate over the rights and wrongs of a coup d’état in a country where coup plotters were greeted with cheers, and where an ex-coup leader has just been elected an MP. Moreover, the proposal adds to the opening up of a political space for a public discussion on Article 112, and generally, on the role of the institution of the monarchy.

[2] Note: This is not a word-for-word exact translation. Please refer to the full proposal on the above mentioned website (in Thai only) to view the original.

[3] A public talk given on September 18, 2011 at Tah Prachan campus titled “5 years coup, 1 year Nitirat” Most of the talk can be found on Youtube.

[7] Note: Aj. Charnvit posted a rebuke by the Nitirat Group that the head of the Law Council of Thailand served on the ASC in the past and thus had a conflict of interest: http://www.matichon.co.th/news_detail.php?newsid=1317231514&grpid=01&catid=&subcatid