The most important conference for Asia-Pacific archaeology, heritage & museums is in Vietnam from 23 to 28 September. PoP takes a look at the Southeast Asia sessions & papers we are most excited about.

The Indo-Pacific Prehistory Association (IPPA) conference is held every four years, making it in many ways the Olympics of the Indo-Pacific archaeology world. The organisation has been meeting since 1929 and has expanded from its original archaeological focus to include issues such as antiquities theft, ethics, and the interface of history and archaeology. This year, the conference has been organised by Prof. Nguyen Hiang Hai, Dr. Phan Thanh Hai and Prof. Ian Lilley.

If you are lucky enough to be attending then we have prepared this handy guide to the papers and presenters that we are most excited about – with a strong bias towards PoP’s preference for ambitious new approaches to Southeast Asian archaeology and history. PoP’s members have organised a full day of sessions on Monday 24 September, on ) ‘New and Emerging Perspectives on Southeast Asian Settlements, Cities and Urbanism’.

On Day 1 we have the conference opening and plenary sessions. Our highlights  include Dr. Hirofumi Matsumura’s plenary talk, ‘Dispersal of Anatomical Modern Homo sapiens in East Eurasia and Sahul in the Context of the ‘Two Layer’ Model’, which promises to bring new insights to understanding the first people that populated Southeast Asia. Prof. John Miksic is one of our favourite researchers, and will be speaking about ‘The Use of Prehistory in the Historical Archaeology of Southeast Asia’.  Dr. Rasmi Shoocongdej’s paper on ‘Southeast Asian Archaeology in the 21st Century’ should identify some interesting trends and upcoming big research issues. There will be several talks in the afternoon in honour of Prof. Ian Glover.

Monday is the first day of the conference sessions proper. While there are many good sessions running, PoP’s focus for Monday is on our all-day session organised by Michael Leadbetter, Prof. Roland Fletcher and Ben Dharmendra on ‘New and Emerging Perspectives on Southeast Asian Settlements, Cities and Urbanism’, which features 15 papers across the day. These panels will showcase the most exciting new theories, discoveries, methods and technologies proving new perspectives on settlements and urbanism across Southeast Asia. The panel’s intention is to develop a new regionwide perspective based on the participants’ emerging research.

The first block includes Prof. Roland Fletcher, who will be taking a long view of urbanism in the region, Ben Dhamendra on pathways to Low-Density Urbanism in Mainland Southeast Asia, and yours truly, discussing my recent ideas on settlement patterns, trade and critiquing early globalisation in the Malay Peninsula and beyond into wider Southeast Asia. Vo Thi Phuonh Thuy will be talking about settlement patterns in Vietnam, focussing on the ancient capital of Hoa Lu.

The second block features Prof. Laura Junker’s research into socio-political connections and urbanism in the pre-modern Philippines. Michael Armand P. Canilao will be weaving together site, region and networks in the Northwest Philippines. Phacharaphorn Phanomvan and Theerasak Thanusilp will be presenting their new research on the rise of the Sukhothai in Thailand. Local archaeologist Tran Ky Phuong and colleague Dr. Rie Nakamura will be taking an anthro-archaeological approach to understanding the relationship between settlements and trade in inland former ‘Indochina’.

The third block includes Prof. Goh Geok Yian’s research on Bagan and medieval urbanism and Myanmar. Jared Koller will be presenting his research with Prof. Steven Acabado on their research into the agricultural terraces of the Ifugao in the Philippines. Rachna Chhay will be presenting his research with Prof. Alison Carter, Piphal Heng, Prof. Miriam Stark and Dr. Damien Evans. Prof. Nam C. Kim, a researcher who always contributes big ideas, will be talking about his research at Co Loa in Northern Vietnam.

The final block of the day includes David Brotherson talking on the decline of Angkor, and Dr. Martin Polkinghorne, Yuni Sato and Leng Vitou on Cambodia’s Early Modern Capitals. PoP’s own Wayan Jarrah Sastrawan will be concluding the day with his paper on how the political integration of different settlement types in Java contributed to that island’s hegemony over the Indonesian archipelago between 1300 and 1500 CE.

Tuesday is jam-packed with a number of fascinating panels. Our top picks for this day are two sessions running the whole day. ‘People and the Sea: Current Research on Maritime Interactions’  organised by Dr. Jennifer Rodrigues and Abhirada Pook Komoot will be a highlight for those interested in maritime heritage, trade and cultural interactions.

For those interested in art and Myanmar, ‘New Research on Myanmar Art and Archaeology’, organised by Prof. Elizabeth Moore and Baptiste Pradier, will be unmissable.

Thursday morning will start with Jiun-Yu Liu’s ‘Transmission, Transportation and Transition: The Flow of Materials and Ideas around the South China Sea Maritime Region’. In the afternoon, Dr Noel Hidalgo Tan, Adhi Agus Octaviana and Victoria Scott are pushing some new ideas, theories and methods in their panel ‘Southeast Asian Rock Art Beyond Images’.

Prof. Janice Stargardt’s panel ‘New Research on Southeast Asian Ceramics from 1st and 2nd Millennium Archaeological Sites’ will be a must see for many on Friday morning. In the afternoon, ‘The Emergence and Dispersal of Homo sapiens in Indo-Pacific Region’, will be one to attend for those interested in the prehistory of the Indo-Pacific’s first humans, organised by Prof. Yoshihiro Nishiaki, Dr. Chris Clarkson and Atsushi Noguchi. Many of the Indonesianists will be heading to ‘Connecting the Dots: The Past of the Maluku Archipelago in a Multidisciplinary Perspective’ organised by Marlon Ririmasse and Dr. Peter Lape. 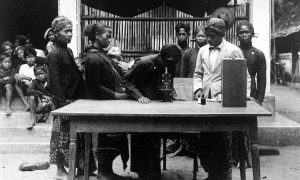