KALIAN SIAPA? (‘Who are you people?’), scrawled one frustrated voter on their ballot for the Regional Representative Council (Dewan Perwakilan Daerah, DPD) during legislative elections on April 9. While members of the DPD are directly elected, they have limited formal powers. DPD candidates cannot officially associate with a political party, making it a challenge to distinguish among competitors. The non-partisan structure and limited powers lead many analysts and voters to overlook DPD elections. DPD results can reveal bewildered voters–like the picture above–as well as peculiar voting patterns.

Elections for the DPD have, in the past, been affected by numerical idiosyncrasy. The number a candidate was assigned seemed to be a key determinant of success. A nomor cantik (“beautiful number”) appeared to be the difference between success and failure. Electoral authorities even considered reforms to the system to address the issue in 2014. But is there any basis for the concerns? And did the nomor cantik factor matter in 2014?

The DPD elections suffer from the problem of information overload though. Given that elections for both national and sub-national People’s Representative Council (Dewan Perwakilan Rakyat, DPR) take place simultaneously with DPD election, campaigns contain hundreds of candidates at multiple levels of governance pursuing a voter’s support. Not surprisingly, the abundance of choices can be overwhelming.

Second, voters use information gathered about the contest for the partisan DPR to guide their non-partisan DPD. In some cases, the information is inappropriately applied. For instance, many Indonesian voters will remember the number of their favourite party and vote for that party at multiple levels of governance. They often carry this number-based voting pattern to their DPD ballot, supporting a candidate assigned the number of their favoured party. A DPD candidate sharing a number with a popular party receives an electoral boost. This is an example of a short-cut short-circuiting.

These short-cuts can have electoral consequences that have been apparent since the first DPD election. In 2004, candidates with early numbers performed particularly well. This pattern tended to occur in provinces with over 20 candidates; in other words, the province’s where voter’s faced the greatest information overload. Furthermore, candidates with the number 20 earned surprisingly high vote share. In total, 10 candidates with that number won their seat. Why? Because, in part, 20 was also the number of Golkar, the largest legislative party in 2004. 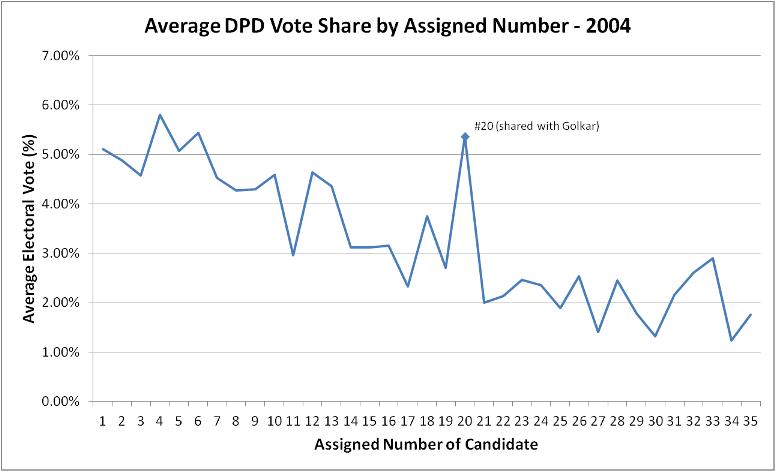 The electoral authorities considered taking steps to curb the nomor cantik issue in 2014 by not assigning DPD candidates a number with which to promote themselves. For logistical reasons, though, they ended up ordering candidates and assigning numbers alphabetically.

Importantly, the smaller number of parties–12 in total–limited the overlap between DPD candidate numbers and party numbers. All the major parties were assigned number between 1 and 10. Since there were no large parties assigned a high number in 2014, we do not see any noticeable spikes for down-ballot DPD candidates. The strict DPR ballot access rules, which limited the number of parties competing, also limited the most noticeable manifestations of the nomor cantik issue in DPD results. 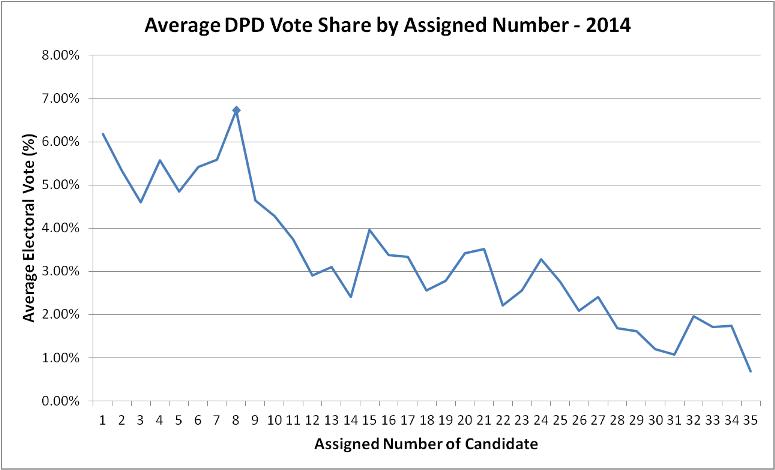 There is at least one easy solution to help curb the nomor cantik issue: start the numbering sequence where the DPR party number ends so that they don’t overlap. The issue of ballot ordering is trickier. Across elections there is the relatively high vote for early numbers. There is no simple fix for this problem. However, present alphabetical ordering rules privilege Abduls and Ahmads at the expense of Zainals and Yulyanis. Incumbency will further entrench the advantage of those with fortuitous names. The DPD is evolving from a pattern of nomor cantik to one of nama cantik. A random draw would be fairer to all involved. Some issues to consider when lawmakers revisit electoral rules.

*Note: for reasons of presentation I limited the figures to only 35 candidates. Some districts do have a higher number, though their results do not appear.

Nathan Allen received his PhD in political science from University of British Columbia and is currently a post-graduate research fellow at the Asia Pacific Foundation of Canada. You can follow him on Twitter @nw_allen.