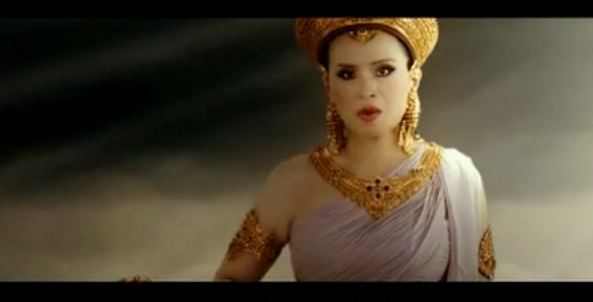 The Legend of the Greatest Queen Jamadevi (р╕Ир╕▓р╕бр╣Ар╕Чр╕зр╕╡) is the latest film starring Princess Ubolratana Rajakanya Sirivadhana Barnavadi, the eldest daughter of King Bhumibol Adulyadej. The film, due to be released sometime in 2012, must be perceived as another nationalist movie which reflects a desperate attempt to glorify the Thai royalty and to justify the making of enemies.

Here is its synopsis, as advertised by the film-maker:

One thousand years ago during the Dvaravati era, a baby girl was born with magical powers and grew up a fine lady of great wit and charm. Her profound beauty drew suitors from distant lands to Lavo, a kingdom most desired for the greatness and allure of its ruler’s daughter, Jamadevi herself. Brave at heart and firm in spirit, Jamadevi led vast armies into the battle. With intelligence and cunning, no man could ever rival, she triumphed over many invaders. Appointed to reign over Hariphunchai, she roamed far and wide across the kingdom, leading forces of warriors, monks, pundits and craftsmen in brave attempts to expand her territory. However, before Queen Jamadevi could achieve her greatest desire, the storm of a great war erupted. With her beloved land and freedom at stake, the revered Queen Jamadevi and her loyal warriors were about to encounter the most mighty and terrifying army ever, knowing that if they lost, all would be lost.

Unsurprisingly, the story is a full of fiction, the supernatural ability of the ruler, and an overbearing emphasis on love for the kingdom. The release will be timely and will possibly intensify the already heated debate on the reform of Article 112 (the lèse-majesté law). Thai hyper-royalists have lately tried to substantiate their claim that Thailand has remained an independent nation thanks to the sacrifice and bravery of past kings and queens. Therefore, those who strive to amend the law, designed to protect the dignity of the monarchy, must be regarded as “ungrateful” or even “threatening” to the royal institution and the Thai nationhood.

It doesn’t take a film expert to determine that the leading actress, Princess Ubolratana, is at best Madonna ├а la Thailand when it comes to acting. Wooden and emotionless, Ubolratana’s acting is excruciating. Yet, she has continued to appear in many films and enjoy her superstardom in Thailand, something that she had long yearned for.