Last Friday I provided some general data about Thailand’s economic performance since Thaksin came to power in 2001. As some commenters have noted, while the overall record of economic growth is impressive, data on average GDP per capita says nothing about the distributional impacts of growth.

In this post I provide some data on absolute poverty and relative poverty (inequality).

The following graph provides data on regional poverty rates from the late 1980s up to 2009 (if anyone has more recent data, please let me know). The data show that rapid economic growth in the 1980s and 1990s produced sharp reductions in the level of poverty. However this trend was reversed in the second half of the 1990s, as a result of the Asian financial crisis. From 2000 onward there has been steady decline, though with some modest increases between 2006 and 2008.

Of course, there is plenty of room for debate and analysis about the role of Thaksinesque policies and programs in bringing about these post-2000 reductions (and some will also want to argue about the level and validity of the poverty line used in compiling these data). But it is not hard to see how Thaksin and his allies have been able to produce a compelling electoral narrative about economic and political inclusion, especially with Thaksin coming to power after the notable deterioration in living standards in the late 1990s.

What about relative poverty? While it is clear that standards of living have been improving throughout Thailand, has the rate of improvement differed by region, increasing (or reducing) regional disparities?

Here is data, from the same source as above, on the Gini coefficient: 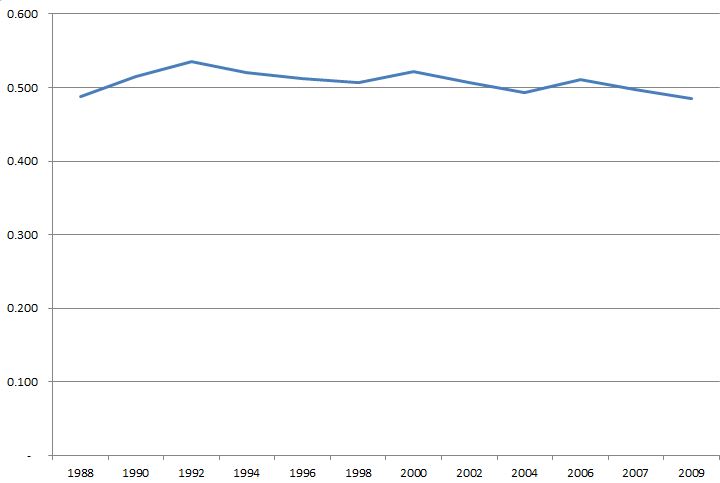 Two observations: First, the coefficient is relatively high. Second, the coefficient has not changed much since the late 1980s. Since Thaksin came to power in 2001, there has been only a very modest decline.

In short, as far as the period 2001-2009 is concerned, the legacy of the Thaksin era is a very significant reduction in absolute poverty, but no substantial progress on relative poverty. The political implications of this are profound. As I argue in Thailand’s Political Peasants:

The overall result is that the Thai state has helped to maintain a large rural population that, despite significant livelihood improvements, is insufficiently productive to fully meet the aspirations that economic growth has aroused. (56)

Addressing inequality will require profound changes in the structure of Thailand’s economy. In particular it will require a substantial movement of labour out of agriculture and into other, more productive, sectors of the economy. Despite the rhetoric of transformation and modernisation, this has not occurred during the Thaksineque era.