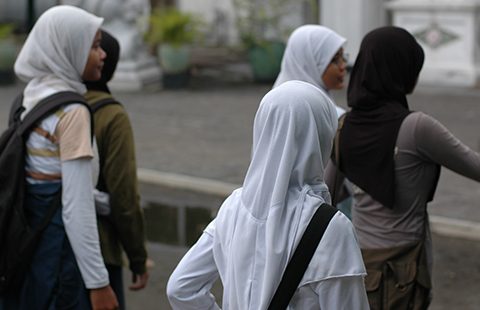 Why Indonesia must ban the harmful practice of female genital cutting.

A friend of mine recently messaged me in shock: “I just read a UNICEF brief that says millions of women in Indonesia have undergone female circumcision. I had no idea.”

“Really?” I asked her. I was a little surprised – she’d been living in Indonesia for 18 months, first in East Nusa Tenggara, and now in Jakarta, Indonesia’s sprawling mega-city of 25 million people.

“I didn’t even know it happened here until about a month ago,” she replied.

My friend has a good point – female circumcision, also called female genital cutting (FGC) or mutilation (FGM), is rarely discussed openly in Indonesia. It’s no surprise that Western expatriates have no idea it goes on here, when even the locals don’t talk about it.

And yet tens of millions of Indonesian girls and women are believed to have undergone some form of FGC. So why don’t we talk about it?

Girls’ circumcisions are usually quiet events; boys’ circumcisions, on the other hand, are often big parties to which the whole neighbourhood is invited. Young boys often talk about whether they have or haven’t been circumcised; I’m yet to hear young girls do the same.

According to a 1998 article by Andree Feillard and Lies Marcoes, conducting female circumcision “in secret” has been the practice since as far back as the 17th century.

FGC in Indonesia is largely symbolic and falls under what the World Health Organization (WHO) classifies as “Type IV – Unclassified”. This includes incision, rubbing, scraping, stretching, and pricking and piercing the clitoris or clitoral hood.

Research conducted by the US Population Council in 2003 suggests that a minority of cases involve excision of the clitoris or clitoral hood – approximately 20 per cent across the archipelago but as high as 50 per cent in some regions such as Padang, West Sumatra.

The same study – conducted in West Sumatra, Banten, East Java, East Kalimantan, North Sulawesi, and South Sulawesi – found that 97 per cent of the 2,660 girls aged 15-18 who were surveyed had undergone some form of FGC.

There are two main reasons parents have their daughters undergo FGC in Indonesia.

The first is religious, as many Muslims here believe that female circumcision is an Islamic requirement, or at the very least, is highly recommended in Islam. This is despite the fact that no formal links between Islam and FGC exist, and that no Islamic laws or Quranic verses speak of FGC, let alone make it a requirement.

The second reason FGC is popular in Indonesia is because it is believed to reduce women’s sexual desire and libido.

“If I hadn’t undergone khitan,” a female Muslim colleague told me in 2013, “I wouldn’t be like I am now. It helps women control their sexual desires and stops them from becoming promiscuous.”

Despite my attempts at debating the issue with her, she wouldn’t budge – she was absolutely convinced that FGC was the reason she was a “good”, responsible woman with strong morals and no interest in seks bebas (premarital or extramarital sex).

This belief is widely held.

Female genital cutting is believed by some to be one way of achieving this. Without it, it is thought, girls will become sexually aggressive and will actively pursue “undesirable” sexual relationships.

In 2011, Amnesty International described Indonesian parents’ reasons for performing FGC on their daughters as being a combination of both religious and sexual:

The women said they had asked that their baby girl have female genital mutilation performed for religious reasons. Other reasons women cited ranged from wanting to ensure the girl’s “cleanliness” (the external female genitalia are considered dirty) and avoiding diseases; to perpetuating cultural or local practices; or seeking to regulate or suppress the girls’ urge towards “sexual activity” during adulthood.

In the survey referenced above, the US Population Council found that 92 per cent of almost 1,700 Indonesian mothers with daughters under the age of 19 supported FGC. Some 69 per cent believed that it had a beneficial impact, and hoped it would continue in the future, including to be carried out on any female grandchildren they may have.

This demand ensures that FGC will still take place even if laws forbidding it were to be developed and enforced. Yet the vast majority of Indonesians also report not properly understanding what goes on during the procedure.

Women interviewed for an unpublished study by Islamic Relief in 2013 had a limited knowledge of the female body, and most disagreed on whether FGC involved cutting or just “cleaning”. A health issue or a gender issue?
In Indonesia it is often argued that “the type of FGC performed there isn’t harmful”. While this is factually correct and indeed worth acknowledging, this does not mean that FGC does not constitute a violation of human rights.

FGC perpetuates harmful gender stereotypes and perceptions of women and women’s bodies. Not only are women’s sexual desires seen as something that must be controlled, their own bodies – even as babies – are identified as “dirty” and in need of “cleaning”.

Although the issue of cleanliness is also used to support male circumcision in Islam, the overall aim is different. Muslim boys are circumcised to ensure that no urine is trapped under the foreskin of the penis, as this would mean they cannot be truly clean when praying, which is essential for Muslims.

For girls and women, the argument of cleanliness is scientifically inaccurate. Claims that urine and genital secretions accumulate and fester in the vulva, vagina or urethra have no medical backing. FGC does not reduce chances of urinary tract infections or infections of the reproductive system. As for needing to be truly clean for the performance of prayers, the scraping, pricking or cutting of the clitoris or clitoral hood would make no difference to a woman’s cleanliness.

So why is FGC still practiced in Indonesia if it has no health or cleanliness benefits? It really comes down to the desire to reduce women’s sexual desire. A simple Internet search reveals hundreds of Islamic scholars and figures advocating for FGC for same reason.

IslamQA.info, for example, states that FGC “takes away excessive libido from women”, EraMuslim.com argues that FGC “is like a brake that women can use to control their sexual desire”, and Malaysian ustadz Azhar Idrus claims in a 35-minute lecture on YouTube that “women who aren’t circumcised have evil lust”.

The wife of a former Nahdlatul Ulama president, interviewed by Feillard and Marcoes in the 1990s, said FGC prevented sexual “aggressiveness” in young women, while a man knowledgeable in Sundanese traditions said that “if not removed, the upper part of the clitoris would make the girl unable to control her sexuality.”

It is clear that more than just religion and health is at play regarding FGC in Indonesia.

FGC not compatible with Jokowi’s vision of modern Indonesia
Indonesia, and its supposedly reformist President Joko Widodo, needs to take a double-pronged approach if FGC is to be eliminated. First, it needs to overturn all legislation that permits the procedure, and must ban both medical professionals and traditional birth attendants from performing any form of cutting on girls and women.

Second, Indonesia must carry out a mass education program, so that parents and children alike will understand that female circumcision is not an Islamic requirement, has no health benefits, increases the risk of reproductive and sexual problems, and has no impact on a woman’s sexual desire.

The government should work together with religious and non-religious bodies alike, but particularly should get senior Islamic figures on board, as in Egypt, where the two most senior clerics called for FGC to be banned in 2006 – the following year, Egyptian medical professionals were banned from performing FGC, and it appears that FGC prevalence has begun to fall.

It is in Indonesia’s best interests to stop ignoring FGC, and recognise it as the women’s rights violation it is. By aiming to alter a woman’s sexual drive or make her ‘clean’, FGC is a discriminatory practice, and is ultimately just one more way that female sexuality is controlled and regulated in Indonesia.

The Indonesian government must take a stand and recognise that although the type of FGC practiced in Indonesia is one of the least physically harmful types, it nonetheless is a form of violence against women and contributes to the perpetuation of discriminatory gender roles and stereotypes.

This is an edited version of a longer article originally published on Magdalene.co, a Jakarta-based online publication that offers a fresh perspective beyond the typical gender and cultural confines.