Countering Violent Extremism (CVE) incorporates a range of policy responses aimed at countering terrorism, which, as the name implies, essentially focus on preventative measures. Beginning as a domestic response to terrorism in Western states, today CVE incorporates a broader range of actors than ever before, as states and societies are confronted with new threats and sources of conflict.

Terrorism and violence prevention have traditionally been the responsibility of security agencies. However, as the focus of CVE policies widen, more and more government and non-government agencies have been drawn into the implementation and development of counter terrorism (CT) initiatives. Under the widened CVE banner, national and international policy-makers have responded to concern about the increased terror threat by increasing outreach and engagement (both online and offline), and incresing CVE aid funding and programming in non-Western states.

Indeed, the globalisation of Countering Violent Extremism (CVE) is the “most significant development in counterterrorism policy of the last decade.” What has been instrumental in this process of globalisation is the development world’s seeking a role in terrorism prevention through CVE. The UNDP, for instance, recently requested $108 million over four years to fund what would be the UN’s largest global CVE push.

One place in Southeast Asia where CVE is having a palpable impact, both on CT policy and the development sector more broadly, is Indonesia. Indonesia has built a unique position in global CT forums, positioning itself as a global leader of moderate Islam, exemplified by President Joko Widodo’s hosting of the 2018 “moderate Islam summit”.

My research shows that the emphasis and wider inclusion of CVE in international development has a range of implications, some of which can be considered problematic. How the violent extremist “problem” has been framed and deployed in international development circles sometimes contradicts the experience of experts in Indonesia’s security and development sector. Because non-security trained professionals may not have as deep an understanding of which communities need to be targeted in prevention efforts, they are more prone to stereotyping certain communities as being predicated to radicalism. Moreover, the “CVE-isation” of international aid gives rise to issues of transparency in a context where organisations delivering CVE programs are discouraged from disclosing that they are doing so because of both the stigma associated with CVE involvement and security risks. The accumulating side-effects of these problems have consequences both for the efficacy of counter-terrorism policy, but also for the health and integrity of Indonesia’s civil society.

CVE necessarily places a strong emphasis on matters of faith. Because of this, CVE in foreign policy and aid in Muslim majority societies has come to incorporate religion into “strategic planning and international partnerships by supporting efforts to promote moderate Islam.” But there remains little clarity in many private sector and not-for-profit driven CVE strategies around the concepts of “radicalisation”, “extremism” and “violent extremism”, and its perceived antidote, “moderation”. Varying CVE actors frame the issues and causes of terrorism differently, deploying these terms to situate the problem in a range of sometimes contradictory ways.

For example, evidence has emerged of NGOs reframing their program policies and to access funds in the CVE sector, moving from poverty reduction as a focus to violent extremism as a broad focus due to the widening of funding to CVE, and the corresponding decrease in poverty reduction funding. This has also occurred in the West where not for profits who had previously focused on multiculturalism as a speciality now predominantly work on CVE.

Because of more recent inclusion of CVE among a wider range of community and international development actors, the use of the term “radicalism” and the messages aimed at preventing the spread of “radical ideology” can often be problematic. This is primarily because understandings of the sources of terrorist recruitment are often vague and too broad-reaching. Troublingly, it means that interventions may be targeting the wrong people.

The mis-identification/arbitrary identification of who is, or is at risk of becoming, “radical(ised)” may also have counter terrorism implications. As research on the Western CVE programs has indicated, unfair portrayals of “radicals” and religious conservatives can lead to victimisation—feeding into terrorism recruitment tactics about the state being “anti-Islam”. It also counters decades of research that shows that while it is possible to disengage terrorists from violence, it is impossible to really change their ideological stances.

In Indonesia, the source of many simplistic narratives about “radicalisation” and its causes is the idea that so-called “petrodollar-financed Wahhabism” has infiltrated the traditionally “moderate” Indonesian Muslim culture, driving Muslims to more hard-line version of the faith, and thus into the arms of terrorist recruiters.

Unfortunately, this has played into concerning and unhelpful stereotypes about the relationship between religion and violence, and of limiting dichotomies of “moderate” vs “radical”. While some terrorists have come from Salafi and Wahabi circles, there have also been Indonesian Muslims who have also been part of “moderate” Muslim circles and education institutions. It is unhelpful to generalise that one’s religious standing will make a person vulnerable to terrorist recruitment.

CVE actors in development circles with no security experience may have unintentionally promoted Wahabi-phobia through CVE counter-narrative work. Just one implication of this is that Wahabis have become one of the most hated groups in Indonesia; the Wahid Institute has noted that from 2016 onwards, anti-Wahabi rhetoric has increased. One of the potential sources of anti-Wahabi/Salafi rhetoric is the moderate vs radical dichotomy which has been promoted by some civil society organisations in their efforts to counter terrorism through CVE. This particularly impacts young women, as they are visible targets of discrimination and anti-“Wahabi” sentiment due to their visibility from wearing the niqab (face veil).

In discussions, Indonesian security professionals have noted that stereotypical thinking about “radicalisation” and false presumptions about who is actually “at risk” are rampant in the development sector. This is further complicated by the lack of protocols for the sharing of information from the security sector that allows development workers to understand the profiles of terrorists and those who are likely to be targeted by terrorist groups. Yet because there is no way to security-clear development professionals in the way workers in security agencies are, there are no methods for this (often classified) information to be transferred.

Nevertheless, as I have argued previously,

there are opportunities in Indonesia to learn more about who is at risk of committing acts of terrorism. More could be achieved if official knowledge about terrorism and radicalisation was consolidated, with unclassified information disseminated to the civil society practitioners who do so much of Indonesia’s meaningful CVE work… In particular, Indonesian CVE would benefit from more systematic studies of the networks uncovered to date, particularly the case dossiers of the almost 800 individuals indicted since 2002 on terrorism charges.

Another concern that I have found is around the CVE-isation of violence prevention, development and aid sectors. This is particularly a dilemma for CSO workers, who increasingly design and apply for CVE programs because there is more funding in CVE in international aid. A CSO worker recently shared her thoughts on this with me in an interview, saying:

Sometimes [international organisations] “force” their perspective on what happens in the global response [or their countries]. [They also] generalise the violence here. For example, Indonesia is a diverse country that has a range of violent actors, many of whom fall outside the terrorist frame.

She also had concerns about the long-term impacts of CVE funding of the development sector, stating that because not for profits are increasingly:

applying the CVE framework on ordinary social or economic problems that ten years ago would have provided solutions from a development approach, the culture of international development may morph and change to represent goals outside poverty reduction.

One major issue here is that communities involved in CVE work often cannot reveal that they are doing it. This is both for security reasons, but also because CVE labelling impacts the credibility of programs in working to meet their target audiences.

The result, as has been observed in studies on CVE in the West, is that there are concerns that CVE can stifle transparency. The tendency to conceal CVE funding, says one critical analysis of CVE, “undermines the … open and accountable debates that are “essential to a healthy civil society.” The lack of publicly available information also makes it “difficult to even assess how and where CVE policy is being implemented and by whom”, making critical analysis and external evaluation of CVE programs’ results near-impossible.

Yet the numerous issues that arise in the controversial CVE space underline the need for constant critical analysis and evaluation by policymakers and CVE stakeholders at all levels of planning and policy implementation. This is a conundrum that will continue to trouble CVE workers and policy makers until the issues surrounding CVE and its definitional issues are addressed. While a broadening of the CVE response may hypothetically improve the scope for global violence reduction, within whole of society approaches also comes an increased need to safeguard the privacy of citizens, and to balance the risks of engaging non-security trained professionals in what is effectively a counter terrorism exercise.

In Indonesia, these problems are not hypothetical. As Western states increasingly engage the Indonesian civil society sector to roll out CVE programs, issues that have emerged which implications for the effectiveness of counter-terrorism, while others impact on the development sector itself. 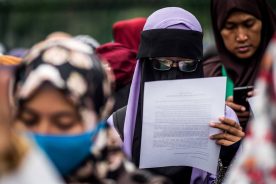 Ultimately, however, in a world where political and religious extremism is likely to increase, do we need to create more space for extremists to express their frustrations at real or perceived injustices? How might such forums look in Indonesia, where Islam (both “moderate” and “radical”) are central rallying tools for social justice and political change?

In Indonesia, where everyone from hard-line pro-sharia Islamists to liberal moderate Muslim political elites deplore terrorism and its devastating impact, can we begin to call CVE what it initially was intended to be: terrorism prevention? In moving beyond the radical and moderate dichotomies of us versus them, of “fanatic” vs “not-very-religious”, the sector could come to embrace a broad stance against violence that is inclusive of a diverse range of voices that are truly representative of Indonesian society. After all, security sectors have to find ways to reintegrate former terrorists, whether they change their ideological stance or not.

This article is based on the author’s presentation at the 2018 CILIS Islamic Studies Postgraduate Conference, hosted by the Centre for Indonesian Law, Islam and Society (CILIS) at the University of Melbourne.