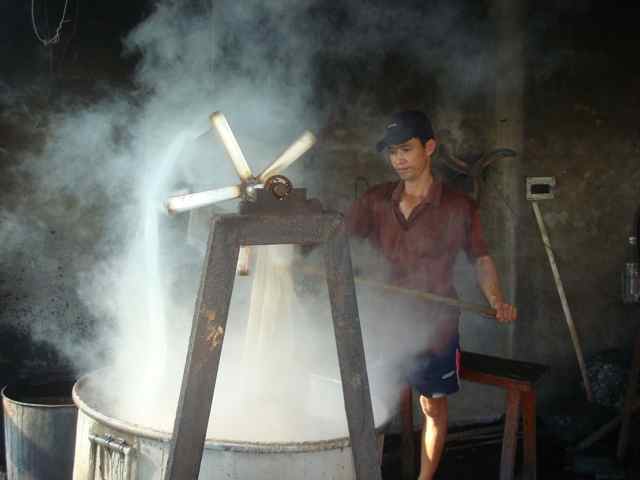 Dyer at work in Nha Xa. “Inside the vat it can be 120 degrees with a terrible smell. Most can’t stand it, and of course they can’t avoid being directly affected. They never gain weight and are always very thin.” (Village Leader, Nha Xa)

While guiding us through the craft village of Nha Xa in Vietnam’s Red River Delta, the elderly village head, Thien, explains how villagers’ fortunes have waxed and waned over their 800 years of silk production. Nha Xa has seen significant periods of conflict and political transformation, including socialist central planning from the 1950s and the opening up of markets with the Doi Moi policy in 1986. Thien acknowledges that the current renaissance in silk production has increased the income of most villagers, but also requires intensive use of toxic chemicals that damage the environment and villagers’ health. The village is at a cross roads between economic development and social risk: “We know the pollution is killing us slowly, but if we stop doing it we’ll die anyway”.

Nha Xa is one of around 2,790 craft villages in Vietnam that specialise in producing ‘traditional’ goods such as processed foods, textiles, ceramics, fine arts and furniture, as well as more recent products such as recycled paper, metal and plastics. Over 70 per cent of these villages have only come into being since Doi Moi was implemented in 1986. Craft villages have grown in the intervening period to provide employment for around 11 million people – nearly a third of Vietnam’s total rural labour workforce (EPA 2009). They have promoted industrialisation and generated incomes up to five times higher than in agricultural villages, with associated improvements in poverty indicators. In many craft villages, craft production and services have become the dominant income source, accounting for between 60 to 80 per cent of household income (MONRE 2008).

Craft villages are a story of small-scale rural industries that have primarily grown through the initiative of village-based entrepreneurs. The development of craft villages has been largely spontaneous with little government planning or support, although this has changed over the last decade. The government is now promoting craft industries as a means to industrialise and modernise rural areas, while simultaneously struggling to manage their negative environmental impacts. A combination of supportive policies, demographic pressure and high rural unemployment is expected to fuel the continued growth of craft villages in the coming decades (World Bank 2008). Pond filled with waste water in Nha Xa: “The morning glory growing around here – don’t buy it in the market because if you eat it you will have a stomach ache. Growers sell it to people they don’t know – not to the people who live in the village.”(Retired teacher and small-scale weaver)

The resilience and rapid expansion of Vietnam’s craft villages challenges and expands the current thinking about economic development. Firstly, craft villages, with their small to medium-scale and rural or peri-urban production base, complicate the assumption that industrialisation in Asia will follow large-scale, urban-based industrialisation. They sit somewhere between Vietnam’s burgeoning industrial estates (Forsyth 2004) and the small, ‘benign’ peasant industries of past years (Gourou 1955[1936]). Craft villages defy the imagined urban-rural divide in many analyses of industry and environment, which situate industry in the former and agriculture in the latter. They also highlight the social, economic and environmental challenges inherent in this mode of locally driven industrialisation.

Although pollution levels from craft production are relatively small compared to industrial and urban waste, the associated health risks for producers and their immediate neighbours are significant (MONRE 2008). As a deterrent, craft production activities are subject to a similar array of regulations and economic instruments (fees per unit of pollution) as are applied to large scale industry. In addition, the government has attempted pilot waste-water treatment schemes, and has established industrial zones to concentrate craft workshops within villages. Despite this, pollution is increasing rapidly.

In Vietnam, a strong civil society movement has mobilised against pollution from large, foreign investment-supported industries in recent years (Forsyth 2004; O’Rourke 2004). Despite a strong media focus on craft pollution, craft villages have so far escaped such attention, perhaps because craft producers are relatively small, localised and long-standing participants in the rural political economy. Nor have civil society groups assisted in formulating or campaigned for solutions to craft pollution. Our recently completed field project studied four craft producing communes in the Red River Delta region of northern Vietnam. A discussion paper reports on policy-relevant findings and scholarly publications are in preparation. We find that the growth and environmental impacts of craft villages are the result of important historical transitions, the small-scale, dispersed and networked characteristics of craft enterprises, and broader social, economic and political factors at play locally, regionally, nationally and, in some cases, globally. Fundamentally, we argue that unless pollution governance systems are founded upon a rich understanding of the motivations, interests and characteristics of these producers, they are likely to fail.

The World Bank. 2008. Review and Analysis of the Pollution Impacts from Vietnamese Manufacturing Sectors. Washington, USA: The International Bank for Reconstruction and Development/The World Bank.