30 years after the Santa Cruz massacre: What legacy is left behind?

On 12 November, 1991 the Indonesian military, fully equipped with automatic rifles, shot demonstrators randomly at close range in the public cemetery of Santa Cruz. This later became known as the Santa Cruz Massacre, which drew international attention after the video footage produced by the late Max Stahl was broadcast abroad. According to Amnesty International roughly 280 youth were killed, hundreds went missing and many have never been found.

The massacre itself had an impact on the international stage, notably for East Timorese diplomacy as East Timor’s quest for independence was placed on the world map after long being neglected by the world leaders with economic and military ties to the Indonesian government.

30 years have passed and the government and a new generation of East Timorese commemorate this event every year. A monument has been erected in front of the Motael Church where Sebastiao Gomes was murdered by Indonesian spy on 28 October, 1991 which precipitated the mass demonstration at Santa Cruz.

A youth body called the “12 November Committee“ (Comite 12 de Novembro) was later established by protest leader Gregorio Saldanha “Mouris,” in order to keep the memory of Santa Cruz alive for current and next generation.

But rituals, celebrations and commemorations have failed to heal the pain and suffering of the victims, survivors and relatives who were left behind. Monuments and commemorations seem to justify the words of Indonesian anthropologist Ariel Heryanto, reflecting “remembered signs and dismembered bodies.”

While the government officially boasts of the contributions made by the youth who sacrificed themselves in the cemetery and the second wave of massacres carried out by the Indonesian military afterwards, there is still little official commitment to find their remains

The government should search for these “unmarked graves”, aiding those still attempting to find their loves one. Many efforts had been pursued by 12 November Committee to find the remains of the victims, and some have been exhumed from the mass grave nearby Tasi-Tolu’s lake. Nonetheless, attempts to find the rest have so far been in vain. In 2008-2011 a program was led by Soren Blau and Findebinder  from The Victorian Institute of Forensic Medicine, but their efforts  ended abruptly due to a lack of funding.

30 years have passed since this tragedy broke new ground for the independence movement, and marked youth heroism in East Timor’s history, yet ludicrously the story of these youths’ contribution to the liberation of their homeland is yet to be fully written. In the final report of the Commission of Truth, Reception and Reconciliation released a few years ago, only some 40 pages from 2000 pages were dedicated to the contributions of the youth and student movement during the struggle for independence from Indonesian military occupation.

Nevertheless, they left their footprints in the war of independence. From 1989 to 1991 and beyond, the resistance changed its strategy when armed resistance no longer posed the most serious threat to Indonesia’s hold over the territory. That role passed to a new, unarmed opposition. Under the initiative of its leader Xanana Gusmao, Fretilin strengthened contacts with young Timorese in the cities, especially in Dili, and encouraged a policy of non-violent resistance.

This transformation relied heavily on clandestine, non-combatant resistance forces who operated in the towns and villages of East Timor. After the Santa Cruz massacre, and from 1991 onwards, street protest loomed large in the town of Dili, the intifada was a common feature, and open resistance became the culture of the new generation who were mainly born after the invasion and occupation.

Like every war of independence, there is always sorrow for those left behind, and joy for those who gained freedom. Thomas Ximenes, who appeared in Max Stahl’s documentary wrapping his own shirt around a gunshot wound on his leg, was a primary school teacher. He left five children behind; his body was never found. Life for his widow and children would never be the same again.

As time goes by and after almost 20 years since East Timor gained its independence, veterans of the war demand a better life. My short interview with Marcio Graca, a survivor and former political prisoner, is worth quoting at length:

“We never regret the things that we have done for this country. We lost all our best friends, relatives and comrades during the war for independence, but that’s the price that we should pay for our independence. Now, we leave it for our leaders and government to take care the well-being of the people. That’s the independence that we have been dreaming of.”

The main actors in the independence movement in East Timor from the late 1980s onwards were dominated by youth and students who fought tooth and nail for the independence of their country. To quote the historian Eric Hobsbawm, they were the “uncommon people” in uncommon times.

The legacy that these youths left behind was memories and pain for their loved ones that never fades as time passes, awaiting those who will never return. It is of the utmost importance that history does justice to them and remembers those who created history in difficult times. They wrote their own history with their own blood—the ink that wrote the independence of this country. 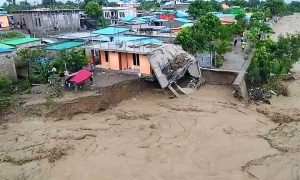 Swarms of international aid and humanitarian assistance do not change long term problems, but deepen Timor-Leste’s vulnerability to shocks like coronavirus and climate-related extreme weather events.