This post is adapted from a paper presented by the author at the ANU Myanmar Update 2017.

The Pyidaungsu Hluttaw (Union Parliament) in Myanmar is getting ready to convene a new parliamentary session and members of parliament are making their way back to Naypyitaw. The vast meeting rooms and empty halls of Myanmar’s oversized capital city will once again be buzzing with activity. The upcoming session will be the sixth session of parliamentary sittings since the National League for Democracy (NLD) formed government in 2016. The Pyidaungsu Hluttaw is a bicameral national parliament in which the NLD holds a majority of the seats, with 25% of the seats held by the military.

The upcoming parliamentary session is likely to be a busy one, not least because the crisis in Rakhine state has focused much attention on Myanmar and its nascent political transition. In fact, the highly active role played by the Pyidaungsu Hluttaw since it was first convened in 2011 under a new Constitution has been one of the more remarkable features of the transition. Despite expectations to the contrary, the parliament has been very proactive in exercising its legislative mandate, approving a total of 251 laws as of the end of 2016.

This lawmaking drive is unprecedented as much as it is unexpected. Prior to 2011, Myanmar had no national legislative assembly for over 20 years after the military assumed power in 1988 following a nationwide uprising. The military regime (through the State Law and Order Restoration Council and its successor, the State Peace and Development Council) simply issued decrees and declarations to fill the legislative void. Prior to 1988, lawmaking power was vested in a one-party unicameral legislature under social rule and before that, an unelected Revolutionary Council established by the military after a coup in 1962. The last time Myanmar had a representative legislative assembly was in the period between 1948 and 1962, a short-lived episode of parliamentary democracy following independence from British colonial rule.

So the art of lawmaking has not had a long history in modern Myanmar politics. It has often been a sideline activity; a rubber-stamping exercise to serve the will of a strong executive government without any accountability to the public. The present day Pyidaungsu Hluttaw, however, plays an instrumental role in the new constitutional system and its members are elected by popular vote (except for the military representatives). It approves the national budget and all legislative proposals by the executive branch. It has numerous standing committees and other ad-hoc committees to assist it in the exercise of legislative power, including a Legal Affairs and Special Cases Assessment Commission chaired by the former Speaker of the Pyithu Hluttaw (Lower House). The parliament also regularly calls for testimony from government ministers and officials on matters being considered in parliament, providing an unprecedented level of oversight of the executive branch.

The lawmaking efforts of the Pyidaungsu Hluttaw since 2011 have resulted in many changes to the legal framework in Myanmar. New laws approved by parliament cover a diverse range of policy areas from environment and education to land and labour. Much remains on the legislative agenda, with significant bills already submitted to Parliament and many more in the pipeline, ranging from intellectual property laws to upstream oil and gas operations. The new laws enacted by the Pyidaungsu Hluttaw add an additional layer to a multilayered web of old or dormant laws enacted since the British colonial era, which are intertwined with executive orders and decrees issued during many years of authoritarian rule.

Just as old laws are not necessarily bad laws, new laws do not necessarily make good laws either. Certain legislative reforms of the Pyidaungsu Hluttaw have received much criticism. A suite of four “race and religion protection laws”—the Population Control Healthcare Law, Buddhist Women’s Special Marriage Law, Religious Conversion Law and Monogamy Law—were all signed in 2015. These four laws were proposed by a nationalist Buddhist organisation, drafted by the executive government (and the Union Supreme Court) and approved in parliament amid heightened ethnic and religious tensions, despite strong objections from civil society groups for entrenching religious and gender discrimination. They were also passed despite constitutional guarantees of gender equality and non-discrimination based on religion under the 2008 Constitution.

More recently, section 66(d) of the Telecommunications Law, which was passed in 2013 as part of the liberalisation of the telecommunications sector, has been used to prosecute journalists and individuals for criticising senior officials on social media. The use of this legislation to bring defamation actions by authorities drew comparisons to the previous regimes’ attempts to repress political dissidents and have been roundly criticised for undermining press freedom. The complaints have continued under the NLD-led government with over 40 cases brought under the law as at December 2016. The law was amended by the Pyidaungsu Hluttaw in 2017 but criticism continues over the law’s failure to protect freedom of expression.

These cases highlight that legislative reform has not always helped to address some of the complex social, economic and political issues facing the country and may, in some circumstances, contribute to the problem.

A critical look at lawmaking

As Myanmar MPs gather to convene a new session of the Hluttaw in Naypyitaw, it is an opportune time to examine the weaknesses of the current lawmaking practices, and to consider ways in which legislative activity can strengthen the rule of law, including in protecting fundamental rights, checking the exercise of administrative power, and promoting transparency and accountability.

In doing so, the NLD government and Hluttaw must move away from the misconception that the Myanmar legal system can be rebuilt, and the economy strengthened, simply by the passage of new laws. The current practice of preparing fairly basic (often poor-quality) legislation in tight timeframes with limited consideration of legal and policy issues or public consultation, which was inherited from the previous government, needs to be reassessed.

It should not be forgotten that the current flurry of lawmaking in Myanmar comes after decades of authoritarian rule with no entrenched legislative practices or public participation in lawmaking. The current legislative process is new and subject to the capacity constraints evident in other areas of public administration.

Most laws passed by the Pyidaungsu Hluttaw contain mainly broad policy statements, establish administrative bodies with ill-defined powers and broad discretion, and contain few detailed provisions. The laws usually require further detailed regulations to put into practice and many new laws are only partially implemented (or not implemented at all) due to a lack of such detailed regulations. For example, the Competition Law 2015 (which came into effect in February 2017) and the Condominium Law 2016 have been in approved for many months and yet the details and guidance required to apply the laws have yet to be released. The result of these legislative efforts is an increasingly complex and uncertain regulatory environment, which in the long run damages the credibility of legislative reforms and undermines the rule of law in Myanmar.

This is evidenced by the fact that, despite the prolific output of lawmaking in the past five years, Myanmar continues to rank poorly in law and governance indicators. For example, the World Justice Project’s Rule of Law index, which measures how the rule of law is experienced by the general public based on rule of law indicators, ranked Myanmar 98th out of 113 countries in 2016. The World Bank’s annual survey of Worldwide Governance Indicators, which assesses governance dimensions such as regulatory quality and rule of law, ranks Myanmar in the bottom 10th percentile out of over 200 countries in 2015.

In this respect, Myanmar is not unlike many other developing countries which are grappling with a lack of capacity and resources in many technical areas. However, the challenge for the Union Parliament and the NLD government is to forge a new approach to lawmaking which harnesses the strong popular mandate enjoyed by the NLD to effect transformative changes to the legal system.

A new approach to lawmaking

Rather than preparing basic laws which are rushed through parliament, the NLD government should focus on improving the legislative drafting process, building strong administrative institutions and reforming the exercise of administrative power based on rule of law.

A uniform procedure for preparing legislation needs to be adopted across the whole of government to improve the quality of legislation being prepared. This procedure should include mandatory public consultation procedures and inter-ministry coordination mechanisms. There is also a need to establish an office or body within the executive branch (possibly within the President’s Office or the UAGO) to oversee, manage and coordinate the preparation and drafting of all legislation across government. During the drafting of new legislation, matters such as budgetary and institutional support required to implement the law must be clearly articulated and carefully considered to ensure that the laws can be implemented properly once passed. In the medium to long term, the government will need to build legislative drafting skills and vetting capacity within the executive and legislature with a core team of highly trained lawyers who can ensure the quality of legislation.

Legislative efforts must also pay particular attention to the establishment of new institutions which are tasked with administrative and regulatory functions under the new laws.  Often, new laws have created new tribunals, committees, agencies and commissions, all of which have to be funded and resourced. The process of establishing these new institutions has often been an afterthought to the legislative process. Unlike laws which can be drafted and approved in a short period of time, building such institutions takes time and resources. This is particularly challenging in an environment where the capacity of the civil service is stretched to the limit. However, the efficacy of the law reform rests on the strengths of these new institutions and the Hluttaw can ensure the executive branch has given due consideration to building and strengthening the capacity of such bodies and their functions under the bills submitted to parliament.

Making new laws without addressing the ability of the civil service to administer the laws is a futile exercise in reform. At present, the ability of the civil service to administer laws is weak and administrative power is often exercised without reference to laws or regulations. The Myanmar civil service has little institutional memory of exercising administrative power within the boundaries of the law and many administrative practices are inconsistent with existing (and new) laws. Given decades of entrenched practices, the urge to use heavy handed administrative measures to exercise executive power remains strong. The lack of legal expertise within government ministries also contributes to their inability and unwillingness to use laws as a basis for administrative decisions. There must be a sustained focus on building legal capacity within government and building a civil service which is committed to the rule of law.

Myanmar faces multiple constraints in addressing these challenges, but the task remains to continue developing its legal framework in a manner beneficial to its democratic transition. The Myanmar Government will need to find the political will to improve the laws and the processes by which they are made, as well as the institutions involved in administering those laws. Failure to do so at this point in Myanmar’s transition would be a wasted opportunity for the country to systematically rebuild its legal institutions and strengthen the rule of law as part of its democratic transition.

Melinda Thet Tun is an Australian qualified lawyer working in law and governance reforms in Myanmar since 2012.  She is currently the Legal Advisor and Project Manager for the Asian Development Bank’s corporate and insolvency law reform program in Myanmar. She is also a legal advisor of the Mekong Business Initiative, a regional private sector development program sponsored by the Asian Development Bank and the Australian Government. The views expressed here belong solely to the author. 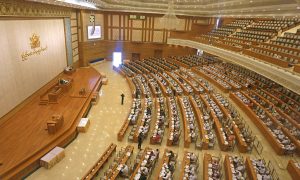 MP's Constituency Development Funds are criticised for promoting clientelism. But we should take a more nuanced view of their role in Myanmar's new politics.