In recent years, much has been written about sharpening religious polarisation in Indonesia, particularly within its Muslim communities. Tensions reached a peak during the April 2019 presidential elections when the incumbent president, Joko Widodo (Jokowi), was backed by nationalists and moderate Islamic groups. His rival, Prabowo Subianto, drew strong support from Islamists. They included hardline groups such as the Islamic Defenders’ Front (Front Pembela Islam/ FPI) and the 212 movement, which led the massive protests against the Christian-Chinese governor of Jakarta in 2016-17.

More recently, observers have been debating how the outbreak of the COVID-19 pandemic in Indonesia will impact religious polarisation. One oft-expressed view is that the public health crisis has lessened polarisation as political parties and civil society organisations come together in the face of a common threat from the virus. Some of the most outspoken anti-Jokowi Islamist groups initially supported the government’s COVID-19 mitigation policies, such as social distancing, the promotion of regular hand sanitation, and restrictions on mobility and public gatherings. They justified doing so on public health grounds, claiming to put politics aside.

I argue, however, that Islamic polarisation persists. It has simply taken on a somewhat different form as a result of COVID-19. Many Islamist groups continue to be driven by political considerations, even though they may not cite them publicly. While supportive of installing measures to halt the spread of COVID-19, they are highly critical of the government’s response, sometimes arguing that it has not done enough to protect the community and, at other times, asserting that measures have discriminated against Muslims. It is possible that the pandemic could end up further entrenching cleavages which have riven Indonesia’s religious and political life in recent years.

Indonesia’s mainstream religious organisations, such as Nahdlatul Ulama (NU) and Muhammadiyah, have strongly endorsed the Jokowi government’s COVID-19 policies from the outset. On 12 March 2020, the NU Central Board issued recommended COVID-19 protocols and the Muhammadiyah Central Board followed suite two days later. Both emphasised the importance of social distancing, including the need to avoid congregational worship and other religious gatherings. Hospitals and medical clinics owned by both organisations have also been directly involved in treating COVID-infected patients and promoting preventative measures. In recent weeks NU has been working hard to contain the spread of coronavirus in its vast network of pesantren (boarding schools).

The Prosperous Justice Party (PKS), the largest Islamist party and a key supporter of Prabowo in 2019, has also fully and consistently backed implementing COVID-19 measures, citing public health data as its basis for doing so. These cases support the interpretation that many major Islamic organisations are responding to COVID-19 as a health issue rather than a political one.

But the behaviour of harder-line Islamist organisations gives a more complex picture. FPI has been perhaps the most interesting in its responses. On the one hand, it has accepted scientific guidance about the coronavirus and has not sought to portray the crisis as a conspiracy. When COVID-19 began to spread in Indonesia, Habib Rizieq Syihab, FPI’s Great Imam, gave directions not to organise mass gatherings and later called for jihad against the virus. The Front’s routine religious and organisational activities in Jakarta and surrounding areas were temporarily cancelled to minimise the virus’ spread. Members in many of FPI’s strongholds across the country volunteered to join in disinfecting places of worship and residential areas.

But FPI’s ongoing political agenda to delegitimise Jokowi while promoting his rivals became apparent in its contrasting attitudes towards the respective anti-COVID policies of Jakarta governor Anies Baswedan and Jokowi. Anies has been close to FPI since the 2017 gubernatorial election and Islamist mobilisation was an important factor in his election as governor. Polling suggests Anies will be one of the front-runners in the 2024 presidential campaign and, after Prabowo’s decision to join Jokowi’s governing coalition and accept a ministerial position, he has become the primary political hope of Islamists.

FPI praised the anti-coronavirus measures announced by Anies on 15 March as prompt and effective, while criticising what they saw as Jokowi’s slow and half-hearted response. It urged the president to learn from Anies’ example and described the governor as providing national leadership.

FPI became more vocal in its criticisms of Jokowi’s COVID-19 policies from mid-May. A fortnight before the start of the Holy Month of Ramadan, its secretary-general, Munarman, lashed out at the Ministry of Religious Affairs for recommending that Muslims perform their normal daily prayers, as well as the evening Ramadan prayers (tarawih) and other religious celebrations, at home instead of in mosques. Munarman denounced the government once again for its cancellation of the 2020 hajj pilgrimage due to the pandemic. He argued against the Minister of Religious Affairs’ decision to violate the hajj law, which requires that the government consult with Parliament before cancelling a pilgrimage.

FPI has not been alone in criticising the impact of the government’s COVID-19 restrictions on public religious services. At the end of Ramadan and nearing the Eid feast, the chairman of the Brotherhood of 212 Alumni (Persaudaraan Alumni 212/ PA-212), Slamet Ma’arif, urged the government to open mosques for joint worship activities. In mid-July, PA-212 defied the government’s ban on mass gatherings and held a large demonstration in Jakarta against the Pancasila Ideological Guidance (HIP) Bill, which was under deliberation by parliament. They claimed that the Bill downplayed the significance of Islam and allowed for the return of communism. At the time of the demonstration, Indonesia was recording over 1,500 new cases per day. Apart from FPI and PA-212, several other Islamic movements have been reluctant or slow to follow social distancing regulations though for some, motivations are more religious than political. 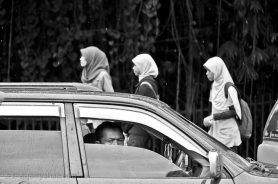 One final recent development warrants mention: the launch of KAMI (Koalisi Aksi Menyelamatkan Indonesia/ the Action Coalition to Save Indonesia) a month ago in Jakarta, which was attended by a large crowd. The key figures in KAMI are the retired Armed Forces commander, General Gatot Nurmantyo and the former Muhammadiyah chairman, Din Syamsuddin. Although not formally declaring an Islamist agenda, among KAMI’s founders are FPI leaders such as Sobri Lubis and Habib Muchsin Alatas, and numerous 212 alumni figures including Bachtiar Natsir, Zaitun Rasmin, Neno Warisman and Lieus Sungkharisma.

Gatot said that the founding of KAMI had been prompted by the threat to Islam’s place in Pancasila posed by the HIP Bill. Among the organisation’s eight point statement of purpose was preventing the revival of communism and stopping the stigmatisation of religious groups. This last point captures a widespread sentiment among Islamist groups that they are being labelled as dangerously immoderate and sectarian. Hundreds of supporters attended KAMI launches across the country in August, many of whom did not implement social distancing.

These responses to COVID-19 as well as to perceptions that the state is making pushes towards secularism reveal that Islamists continue to mobilise on political considerations rather than science and public health concerns. Religious polarisation continues to influence the behaviour of Islamist groups, the pandemic notwithstanding. 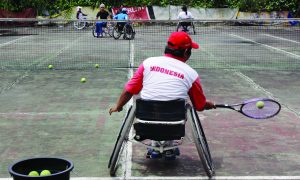 A split has emerged in the Indonesian disability rights movement over the new Komite Nasional Disabilitas. 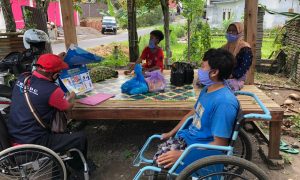