COVID-19 proves to be a boon and a bane for Prayuth Chan-ocha, Thailand’s strongman prime minister and the former junta leader. His incompetent response has resulted in a popularity slump and booming protests. Yet, similar to other authoritarian governments, COVID-19 allows Prayuth’s government a pretext to control the populace. However, the Prayuth regime goes further than its peers to weaponise COVID-19 against dissidents.

The pandemic inevitably requires more restriction to rights and liberties. Governments may mandate facial masks and social distancing. It must ban gatherings, including political ones, and discourage commuting. Privacy is compromised so the government can track and trace patients. In sum, COVID-19 demands a more authoritarian governance. Unfortunately, the authoritarian government of Prayuth is too ready to exploit the opportunity.

COVID-19 arrived just in time to quell budding protests across the country. In February 2020, mass gatherings began to spawn as a reaction to the Constitutional Court’s dissolution of Future Forward Party, a maverick opposition party. By March, as cases soared, the government invoked the 2005 Emergency Decree to impose a lockdown, but protesters had already dispersed even before the announcement of the emergency situation. However, COVID-19 only bought Prayuth some time. Poor management of COVID-19 resulted in economic havoc. Frustrated, protests re-emerged as soon as COVID-19 subsided in mid-July.

The 2020 Protest posed an existential threat to the Thai state. Tens of thousands of angry protesters demanded reform of all the major pillars of Thainess, e.g. the monarchy and the military. The government of Prayuth Chan-ocha has enlisted every available weapon to fight back, including COVID-19.

Prayuth has never lifted the emergency law, which forbids public gathering. Violation could lead up to 2 years imprisonment or 40,000 THB fine, or both. Several by-laws are issued to affirm the prohibition. At a protest site, it became a ritual for police to read a warning according to the Emergency Decree prior to the protest. When making an arrest, violation of emergency decree is always added to the list of offences. Surprisingly, no COVID-19 has been reported from these protests. Most participants wore masks, partly to prevent COVID-19, but more importantly to prepare for tear gas and avoid identification.

In 2020, COVID-19 was simply a pretext to restrict Thais’ freedom of assembly and political expression. It annoyed many protesters but never became a real threat. All that changed in 2021, when the government launched an offensive. Police began to charge pro-democratic activists, mainly with lese majeste, but also other offences such as treason. The court no longer showed leniency. Bail was categorically denied. By February 2021, most key leaders were in prison.

The Presidents of the Supreme Court have issued several guidelines and recommendations on granting bail or temporary release in order to reduce the risk of COVID19 infection. However, it was obvious that, in such political cases, judges did not heed the advice.

Thai prisons are notorious for their appalling conditions. The incarceration rate ranks one of the world’s highest. A prison is crowded and personal hygiene is nil. Most importantly, communication to and from the outside world is tightly controlled. All of these factors make a prison a fertile ground for COVID-19.

During COVID-19, the Correctional Department imposed even more severe restriction upon inmates. Only an attorney could visit them. Relatives, let alone supporters, were not allowed. Even at the court room, prison guards made sure that parents would not be able to touch or talk to these political prisoners. This extra treatment seemed more like a form of psychological torture than COVID-19 prevention.

Upon arrival, Anon Nampa, one of the protest leaders, notified his attorney that, in the dead of night, officers tried to take political prisoners out of their cells. They claimed to be conducting a COVID-19 test but prisoners were concerned that they might be tricked into something more serious. According to rumours, some activists were on the kill lists of the power that be. Death in detention is a not a paranoid imaginary but a real and present possibility.

By mid-April, Thailand was struck with its worst wave of COVID-19. New cases rose to hundreds daily. Despite claims of safety, COVID-19 finally hit the prison system. One by one, political prisoners tested positive. While supporters pleaded that the court should consider granting their leaders bail to lessen crowding in a prison and allow them access to proper medical treatment, the court proved indifferent. One by one, political prisoners were forced to surrender to the court’s term in order to get bail. The court imposed an obligation not to participate in any other protests, criticise the monarchy or instigate disorder. Basically, they must no longer lead protests, although they had yet to be tried or convicted of such offences. But the ordeal was far from over. Some prisons, such as Panassaya ‘Rung’ Sitthijirawattanakun, was later found positive. Her mother and sister tested positive and were hospitalised. Other activists, supporters, and human rights lawyers also contracted COVID-19 from their freed friends and clients. One elder activist, ‘Song’ Sakchai Tangchitsadudee, spent months in ICU. Luckily, no one died.

Eventually, some of these activists defied the court’s order and returned to protest. The 2021 protests turned more serious and confrontational. Police openly expressed hostility but people were more furious too. Lockdown continued indefinitely. The economy worsened and hospitals reached maximum capacity. People began to die in the streets. The government intensified its effort to spread misinformation to discourage protests. Fake accounts began circulating claiming to have caught COVID-19 from participating in mobs.

By August, the court revoked bails for these activists, and denied bail for a few more. Police pressed new charges. They are back in jail. They are subject to 14-day quarantine that would not allow even an attorney a visit. Clearly this rule violates an inmate’s constitutional right to fair trial. Within the first week, some of the political prisoners, notably Parit Chivarak, or Penguin, had contracted COVID-19. Despite the Correctional Department’s denial, it is clear that the pandemic in a prison is very pervasive. Prison warders also caught COVID-19 and a defence attorney again got COVID-19. The prison refused a referral to an outside hospital, insisting on sending patients to a prison hospital which is known to be substandard.

How bad is the prison situation? The Ministry of Justice released very little information to the public but it is clear that the Correctional Department is unable to provide adequate healthcare for such crisis.

All of this does not mean the government deliberately devises COVID-19 as a weapon to neutralize protest leaders. The court hopefully does not wish these rebellious defendants dead. But the court’s indifference to injustice and its blind following of its superior’s order not to grant bail to lese majeste accusees, together with the prison’s awful pre-existing conditions, make COVID-19 a potent weapon to silence an angry public and perpetuate the authoritarian government of Prayuth Chan-ocha. Any sensible person can see that such a combination amounts to inhumane punishment or torture, which is forbidden in section 28 of the Thai Constitution. But what redress is left available to the activists, since the judiciary is working alongside the government and the police to defeat the protest? Some judges probably have blood on their hands. 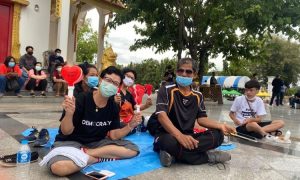 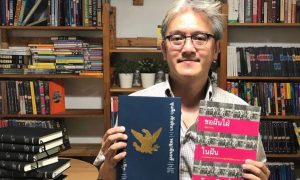