Malaysia’s Barisan Nasional (BN) defeat in the 2018 national election to the Mahathir-led Pakatan Harapan (PH) coalition was the first time in 60 years the “electoral authoritarian regime” had lost power at the ballot box. Given the important role civil society groups like Bersih played in removing a corrupt BN leadership, there was much to celebrate.

Numerous edited books were produced in the aftermath of the election, such as Regime Change in Malaysia by Loh and Netto (2018), Malaysia’s 14th General Election and UMNO’s Fall by Gomez and Nawab (2019), The Defeat of Barisan Nasional by Hutchison and Lee (2020), Towards a New Malaysia? by Weiss and Hazis (2020) and Rebirth by Wong (2020). Two international journal special issues were dedicated to this election, in Roundtable and the Journal of Current Southeast Asian Affairs, and a raft of material has been produced in domestic journals in Malaysia. Many of these empirical accounts were understandably cautious of overplaying the result as a whole-hearted “regime change”, but they all saw election as a watershed moment in Malaysia’s history. 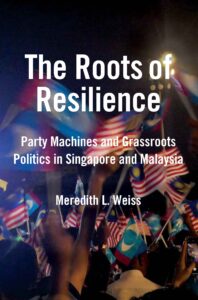 In her new book Roots of Resilience, Meredith L. Weiss reminds us, soberingly, that elections like the PH’s victory in Malaysia was really only “the opening volley, given the deep entrenchment of electoral-authoritarian governance”. The problem, Weiss explains, is that scholarly literature on electoral authoritarian regimes “tends to fetishize elections” but can risk “reading too much into the fact of competitive elections, if the goal is to understand governance more broadly” (p. 25). Weiss therefore aims to “decentre elections in the study of regimes and transitions”, arguing that “elections are part of, but not necessarily defining for, the regime” (p.25).

Malaysia may have moved from the coalition of Najib-led BN to Mahathir-led PH coalition and now (at the time of writing) the Muhyiddin-led Perikatan Nasional, but how much of Malaysian politics and governance has actually changed? Weiss argues that “while an election has transferred power to new hands in Malaysia, regime change writ large lags that shift” (p. 5).

This might seem obvious looking at the state of Malaysian politics today, but it shouldn’t be seen as a fait accompli. For example, Suharto’s fall in Indonesia in 1998 saw both rapid reform and enormous political and societal upheaval. Malaysia’s new PH government had a mandate from the people to implement a list of bold promises and faced no post-election outbursts of racial and ethnic violence, nor regional conflict, to distract it.

But for most Malaysians, politics and governance under PH felt like more of the same. For many others, they were a great disappointment, as opinion polls showed a plunge in the government’s popularity almost immediately after the election, especially amongst Malay voters.

In 2019 UMNO and its affiliate parties turned around to win four by-elections on Peninsula Malaysia. In 2020 UMNO returned to government via political machinations under PM Muhyiddin (a former UMNO Deputy Prime Minister), and its coalition recently regained control of the key state of Sabah, with disgraced former PM Najib Razak, found guilty of corruption, personally campaigning in the lead-up to Sabah election day. How is this possible, if they were so soundly beaten at the general elections only two years earlier?

The simplistic answer to this question—and one propagated by many politicians and media—would be to blame elite actors. Mahathir failed to implement reforms, and failed to work with Anwar. Anwar failed to gain support of other elites and became increasingly paranoid. The so-called “traitors” Muyhiddin and Azmin Ali seized an opportunity to align themselves with disgraced former UMNO leaders Najib and Zahid, and took power with permission from the King via a so-called “elite coup”.

All of which is true, but under this narrative the “solution” is simply a need for “new leadership”. This has come in the promotion of Borneo politician like Shafie Apdal (Malaysia has never had a PM from Borneo), or a new political party driven by more idealistic youth led by Syed Saddiq (Malaysian political parties are notoriously dominated by old men, with Anwar, Zahid and Muyhiddin in their 70s and Mahathir in his 90s).

But Malaysia’s disappointing political “transition” requires significant theoretical interrogation from scholars of political science and other related disciplines, and Weiss does great service to the field in shifting the discussion away from elite actor stories, to detailing how “the system fostered has permeated to the roots, such that its reconstitution will require far more than an election” (p.201) or simply a change of leadership.

To understand this “system”, Weiss focuses on the role of clientelism. She details through Malaysia’s political history, how “over time, citizens came to expect and rely on patron-client relationships, nested within party machines, albeit reinforced by carefully structured disistributive and development policies” (p. 76). This clientelism was enabled at the grassroots level by the abolishment of direct local elections, allowing UMNO in particular to develop a system whereby welfare policies acted as through they were party patronage, “effectively partisanizing them and ensuring ground-level officials with whom most voters interacted were Alliance (BN) loyalists” (p.74). UMNO built mosques, schools, and health facilities, and other village development projects, and regularly involved themselves in funerals and other aspects of village life (p. 74).

For Weiss, clientelism is the feature of Malaysian politics, promoted and fostered superbly under BN and UMNO in particular, but to the extent that “even opposition parties with a more ideological premise came to replicate [that] behaviour” (p.76).  As anyone in PH will admit (especially those in Bersatu, who more directly compete with UMNO for Malay votes) this practice and voter mentality of the role of political parties and governance does not easily change.

Weiss’s three core arguments of clientelism are: a) dominant parties become the providers and funders of programs, rather than the state itself. b) the role of parties and their programs is most dominant at the local level, and c) the local level ties occur through highly personal and partisan linkages. This system ultimately molds voter expectations, as citizens come to expect tangible rewards of programs or funds of party machine politics locally, meaning “clientelism has become embedded in and integral to legislative office” (p. 22). Ultimately, this means “challengers are pressed to mimic the party and personal strategies of their rivals” which “keep genuine regime change elusive, even once a dominant party finally falls”.

In the concluding chapter, Weiss uses the metaphor of mangrove with “powerful roots”, stating that “studies of electoral authoritarianism—or any regime type, really—tend to focus on the treetop, trunk, and branches: the institutional rules and overarching executive. But the ground level matters just as much” (p.200). Weiss’s often complex arguments and detailed research come from years of empirical research and fieldwork, allowing her to uncover hidden roots of clientelism to be revealed to the reader.

In the aftermath of PH victory, democratic governments and international NGOs from the US to Europe to South Africa to Serbia and Australia saw the opportunity to assist Malaysia in pursuing reforms. Many organised conferences in KL, or invited PH politicians to travel to their country as a guest.These international organisations spent time nurturing working relationships with PH Ministers and boosting support for local NGOs, many hoping to assist in reform “wins” (the buzzword “low-hanging fruit” comes to mind, somewhat excruciatingly). It is worth pondering how many understood the challenges of overcoming grassroots clientelism, and if they did get their head around its centrality, how many stayed on for the longer term to work with Malaysians to address it? Thus, the Malaysia case is not only useful to those looking to better understand Southeast Asian politics and democracy, but is a valuable account of the challenges of a meaningful transition from electoral authoritarian rule. The ANU Malaysia Update 2020 “Alternative Visions for Malaysia” is held virtually from October 21-23, registration is here.

The Roots of Resilience: Party Machines and Grassroots Politics in Southeast Asia, by Meredith L. Weiss, is jointly published by Cornell University Press and the National University of Singapore Press, 2020. It can be purchased here and here.