In November 1997, amidst a regional financial crisis that had begun in Bangkok, Thailand’s new foreign minister Surin Pitsuwan pledged a “sea-change in diplomacy”. He established a “Team Thailand” approach to foreign affairs, with ambassadors representing not only the ministry but the nation, and contributed Thai leadership and troops to the UN’s peacekeeping mission in East Timor. In recognition of ASEAN’s recent decision to admit Myanmar, he commenced a policy of “flexible engagement” toward Thailand’s controversial neighbor.

His successor, Surakiart Sathirathai, promoted what he called “forward engagement” toward establishing new or renewed relations with other countries, and oversaw the designation of “CEO ambassadors” to represent Thailand in key capitals. On my bookshelf sit two volumes of Surakiart’s speeches under the Forward Engagement label, including “Thailand: The Path Forward” and “The Future of Asia”. Among the results were the Asia Cooperation Dialogue, the Chiang Mai Initiative, and ACMECS, all of which remain in existence.

Next in the role was Kantathi Suphamongkhol, who initiated Thai diplomacy concerning Iran’s and North Korea’s nuclear ambitions, before handing the reins to Kasit Piromya, a former ambassador to the US who worked to attach Thai interests to President Obama’s pivot to Asia. By that time, Surin had become Secretary-General of ASEAN, marshalling the region’s response to Myanmar’s Cyclone Nargis and other crises.

This brief summary covers not only four foreign ministers, but three Thai premierships that had very little regard for one other. They did not share a common vision for Thailand in the region, but common among them was that each had such a vision—encapsulated, articulated, and pursued. Did they often see further than political realities would allow? Yes. Surakiart’s unsuccessful attempt at becoming the UN Secretary-General was effectively an own goal by Thailand, as most observers believe that Surin—by then out of office and out of favor—would have prevailed had he been the nation’s nominee. But the fact that two Thai names were being bandied about the General Assembly speaks to the competence and confidence of the kingdom’s foreign policy leadership at the time.

Indeed, while my summary covers 14 years of Thai diplomacy that staggered the new century, it ends in mid-2011 with the election of Yingluck Shinawatra ten years ago. As if to illustrate the point, the foreign ministry website’s list of ministers’ names and photos stops with Kasit.

The decade since has been a very different story, one that has seen Thailand’s vision turn inward and shorten beyond its shores; retrenchment over continued outreach and initiative.

Three main factors account for this, the first two of which—leadership and domestic politics—have reinforced one another. Yingluck’s foreign minister, Surapong Tovichakchaikul, a Ph.D. in engineering and former IBM executive, told me in 2015 that his priority had been to grow Thailand’s economic relations with China—a worthy goal but hardly visionary considering China’s brief status then as the world’s largest economy. Surapong, who sadly died last May, was not only related to the prime minister by marriage but had defected from the opposition Democrat party five years before. In the wake of one coup d’etat and two judicial coups that had overthrown her brother and his allies, Yingluck opted for a loyal set of hands over leadership eager to break new ground.

Similar dynamics have attended Thailand’s two foreign ministers since the coup that ousted Yingluck in 2014. The first was Thailand’s chief of defence forces; the second, Don Pramudwinai, is now in his seventh year in the job. Although indisputably qualified, with ambassadorships to China, the EU, the UN, and the US, Don was nonetheless appointed by a coup government and has thus spent a large part of his time explaining when, how, and to what extent his country would return, or has returned, to democracy. His tenure has been marked by a conservative and defensive posture rather than one of enterprise or ambition.

It is important here that by leadership I refer only to the tone and tenor, policies and priorities, set by the very top of the foreign ministry, and not to even the ambassadorial level, much less the working level among Thailand’s diplomatic corps. For in my now 14 years of liaising with junior and senior Thai diplomats, in Bangkok and abroad and among various units and divisions, I have been nothing but impressed by their commitment and capability. Likewise, Americans engaged in the foreign policy process in Washington whom I interviewed with the Asia Foundation in 2018, also noted that Thai diplomats rival those from Singapore as the most adept in the region at getting things done on Capitol Hill and Foggy Bottom.

Perhaps even more critical than leadership or domestic politics in accounting for Thailand’s decade of foreign policy retrenchment is a third factor: regional and geopolitics. And it is here where the results have been most visible and, by my reckoning, most costly for Thailand and the rest of Southeast Asia.

Yingluck’s premiership coincided with both an uptick in tension surrounding China’s nine-dash line in the South China Sea and Thailand’s turn as coordinator for ASEAN-China dialogue. Despite initially parlaying its non-claimant status and firm relations with China into the first official consultation on a Code of Conduct in 2013, the remainder of its three-year term—and the momentum it might have passed on—was compromised by the coup. Thailand’s policy since has rightly been to cite the UN Convention on the Law of the Sea; it is worth remembering that the US, for all its admonitions concerning a rules-based order, is one of just 14 countries to have signed but not ratified the convention. At the same time, Thailand has refused to apply its policy to relevant Chinese practices in the South China Sea, which pursuant to the 2016 decision of the convention’s Arbitral Tribunal, are unlawful.

President Trump’s “Free and Open Indo-Pacific Strategy” all but required a regional response, and again coincided with ostensible Thai leadership, this time as ASEAN chair in 2019. Although Thailand’s long peninsula essentially marks the border between the Indian and Pacific Oceans, it was Indonesia that drafted what would become the “ASEAN Outlook on the Indo-Pacific” that year, after lobbying intensively for its adoption for 18 months. Mindful of the violence that had marred Thailand’s last chairmanship ten years before, this was consistent with many observers’ view that its approach in 2019 was less about getting things right than on preventing anything from going terribly wrong.

The year 2019 was also the first of two years in which the Mekong River hit record low levels, amid accusations of Chinese manipulation of the water’s flow via upstream dams. Thailand currently enjoys excess power capacity, is the subregion’s largest economy, and continues to have the smoothest relations with China in all of Southeast Asia. It is also a member of 11 of 13 multilateral frameworks designed to manage the Mekong River or its economic subregion, including one it established itself in 2003. Indeed, the Ayeyawady-Chao Phraya-Mekong Economic Cooperation Strategy (ACMECS) is the sole framework consisting of only Thailand and the other four lower Mekong states; China is not a member. Yet despite the diplomatic cover inherent to multilateralism, Thailand has been hesitant to leverage its position in defense of its own riparian interests or those of its neighbors.

And most recently, seven months ago Myanmar experienced a violent coup d’etat, sending shockwaves through the region and causing serious concern for Washington’s democracy agenda and China’s Belt and Road Initiative. It has also sent refugees, dissidents, and drugs to the Thai border in numbers not seen in years, to say nothing of the deadly Delta variant which neither nation has brought under control. No ASEAN country has a greater stake in a stable Myanmar than Thailand. Again however, in contrast to most of ASEAN’s 54-year history in which Thailand was considered its primary voice on the mainland, it has been Indonesia, the body’s main maritime voice, leading the regional response to the coup. Despite Yangon’s express preference for the Thai nominee as ASEAN envoy for the crisis—an impressive former ambassador to Myanmar, the UN, and the US—it was with considerable reluctance, sources inform, that Thailand put forward its nominee, and to considerable relief that he was not selected. 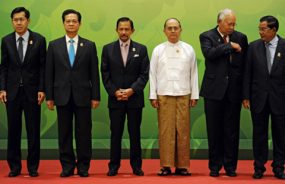 All of these geopolitical issues highlight an oft-cited, unofficial guiding principle of Thai foreign policy for the past decade; namely, “Don’t pressure us to take a position” in the intensifying contest of interests and influence between the United States and China. For positions decrease future options and increase future commitments. Better, so goes the thinking, to continue adhering to the kingdom’s vaunted “bamboo diplomacy”. Yet bamboo trees do not of their own accord sway in anticipation of a wind; rather they are swayed by that wind—often suddenly, swiftly, and in directions they would not have chosen had they had the agency to choose at all.

To be sure, there are hopeful signs. Concerning the Mekong, in 2018 Thailand injected renewed energy into the ACMECS framework that Surakiart had established 15 years before. It now boasts eight development partners, including the US, China, and Australia, and is housed in a new Mekong Unit in the Foreign Ministry. Also in 2018—not long before COVID-19 delayed and derailed foreign policies everywhere—Foreign Minister Don announced a new 20-year “5S” Masterplan: Security, Sustainability, Standards, Status, and Synergy. Encompassing the Fourth Industrial Revolution, South-South cooperation, soft power, and international obligations, among other areas, it does not lack in vision.

Ultimately, foreign policy is a two-way soi. While Thailand can and should challenge Vice President Harris’s decision to become the second senior US official in as many months to exclude the kingdom from her regional itinerary, it must also ask itself what pro-active, Thai-driven, and forward-facing policies it would have been prepared to discuss, defend, and promote.

Surin Pitsuwan sadly passed away in 2017, but he left a legacy of foreign policy leadership and vision that Thailand would greatly benefit from continuing, and that its neighbors and partners would duly recognize.