Can we avoid Myanmar’s isolation over the Rohingya?

Recent experience suggests that once Myanmar sees itself as isolated and victimised, it can be much harder to influence to change its approach on the Rohingya who have fled Myanmar in fear for their safety. This was most apparent in January 2020, when Myanmar’s State Counsellor, Aung San Suu Kyi, went to The Hague to defend serious accusations of genocide against Myanmar’s Rohingya population by the UN Human Rights Council in the International Criminal Court (ICC).

A pause in the current international “campaign” against Myanmar over its mistreatment of Rohingya might provide breathing space for Myanmar and allow it to respond, although one could not be sure that this opportunity would be taken up. If the issues continue to be handled as they are at the moment, this might create a more entrenched view against the international community and the “Western” ideas within Myanmar. Especially considering the public backing from China and Japan, it seems a very difficult place for a middle power like Australia.

We don’t have unlimited time to make real progress on the Rohingya. For any number of reasons, not the least of which is humanitarian, restoring some kind of “normalcy” to their situation and daily lifestyle, is becoming increasingly urgent. Leaving governments to impose solutions will not work; the whole scenario could easily and quickly move to “repeat”. Some Rohingya might be encouraged to return to Myanmar, if their concerns about their safety in Myanmar could be allayed.

While the idea of an Australian “intervention” is probably far-fetched, Australia could launch a low-risk initiative to facilitate a resolution of the current Rohingya situation, rather than doing nothing. Australia could send its Ambassador to Myanmar to lead an independent team to inspect possible repatriation sites for Rohingya who are prepared to return to Myanmar. Any such inspection should include sites prepared by the Myanmar authorities, as well as other prospective sites (to preserve a small measure of independence). This team could report publicly to relevant international agencies, such as the United Nations High Commissioner for Refugees (UNHCR) and the International Organisation for Migration (IOM), as well as to the Myanmar and Bangladesh governments. 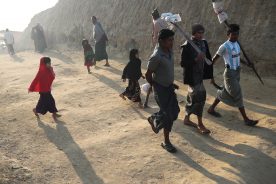 As a surety of good intentions, donors of humanitarian assistance, such as Australia, could guarantee ongoing humanitarian support for the resettlement of Rohingya prepared to return to Myanmar voluntarily.

Countries such as Australia, who already have Rohingya communities in good standing, could conceivably offer to resettle small numbers of Rohingya who have left Myanmar out of fear for their safety, perhaps as part of a joint inter-faith resettlement program.

In return, the Australian-led international team could actively encourage the Myanmar authorities to maintain a high level of transparency and disclosure about its plans for supporting any Rohingya who return voluntarily.

Separately, the UNHCR and the IOM should make public their independent assessments of the well-being of the Rohingya currently located in temporary camps in Bangladesh. 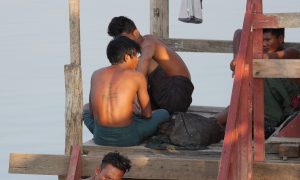 Trapped: slavery in the 21st century

The ILO is making slow but sure progress towards SDGs on human trafficking and forced labour in Myanmar, writes Gary Rynhart.