Joko Widodo’s second cabinet reshuffle on 28 July has sparked a fresh round of furious debate about what it all means.

Jokowi’s main political backers, PDI-P, made no gains, but the reshuffle bestowed some key posts to new coalition parties, PAN and Golkar, rounding out the seven party rainbow cabinet that Jokowi eschewed early in his campaign.

How, for instance, did Jokowi coax Sri Mulyani back for a starring role in Jokowi’s economic dream team, despite key architects of her 2010 fall sitting in his same camp? General Wiranto, serial and serious human rights abuser, Hanura head and supporter of the Jokowi coalition, is back in government, in an appointment that feels decidedly absent of political necessity.

More puzzling still was his sad Facebook status which suggested that for an all-powerful political tsar, he had little prior knowledge that the switch was coming. Meanwhile, Anies Baswedan, the cabinet’s last remaining progressive pick, has been ousted, with Jokowi reportedly terminating their relationship.

Does the reshuffle show that Jokowi, Indonesia’s first middle class president since the fall of Suharto, is consolidating power or that he is merely a puppet for established political elites?

The question itself speaks to an ongoing debate in the study of Indonesian politics about the extent to which ordinary politicians can enact reform in a predatory political landscape dominated by oligarchs and old-regime politico-bureaucrats.

On one side of that debate have been the oligarchy theorists who argue that Indonesian politics is so riddled with rent seekers that ordinary people-cum-politicians like Jokowi are too constrained to be able to effect meaningful change.

On the other side of the fence are pluralists who agree that the political landscape is populated by a ruling oligarchy, but maintain that well made democratic institutions can constrain their power. Change is possible and Jokowi’s rise from entrepreneurial furniture maker to mayor to president, is evidence that those institutions are starting to produce a new political class that can have positive democratic effects.

Make no mistake, the tensions and contestation between Jokowi and his coalition are a big part of the fault-lines in his government. Understanding Jokowi as fundamentally compromised by his old regime players is central to understanding the limits of his administration.

But at the same time, this line of argument sheds no light on the question of what can be compromised in the tussle between reform and stasis. In a crowded bar of political priorities, what are the limits of belief?

Jokowi’s, it would seem, is a double shot of developmentalism straight up.

In the rumble between the pluralists and the oligarchy theorists, what’s missing is an appreciation of Jokowi’s own illiberal tendencies, his impatience with legal complexity and the haphazard ideological mash-up that guides his economic thinking. These are not qualities of the man per se, but symptomatic of the Indonesian middle class and the unique political conditions under which it was formed.

A post-authoritarian developmentalism is front and centre of the administration’s agenda. While reform has been one of the key slogans of the Jokowi administration, that reform has focused mainly on the economy and not at all on amplifying the quality of Indonesian democracy.

For instance, despite the economic boon that legal certainty offers everyone from foreign investors to national fiscal repatriators, the question of substantive law reform has never been further from the political agenda. Indeed, the President actively and repeatedly discourages the law from pursuing corruption cases for fear it will interrupt everything from his “big bang economic liberalisation” to the tax amnesty.

State owned enterprises (SOEs), long used as piggy banks for the political elite, have received an unprecedented capital injection to spearhead the administration’s infrastructure agenda. There’s real rationality in that, but asking creaking SOEs to deliver multibillion dollar projects, on 1 year tendered contracts without the parallel imperative to reform processes and management, suggests a disinterest in the fundamentals of accountability.

Jokowi has introduced the death penalty with gusto, backed by overwhelming public support. Eighteen drug felons have been killed by firing squad in just under two years, while harm reduction programs have been systematically cut. Each round of executions has seen serious questions about the legal integrity of the trial and sentencing and the process of clemency has been riddled with procedural irregularities. And yet, in the face of such bungling, NasDem’s Prasetyo, a conservative political appointment to Attorney General, has outlasted two cabinet reshuffles.

This year, the promise to address unresolved human rights abuses has seen the administration sponsor an unprecedented two-day symposium on the mass killings of 1965. But, Jokowi himself was careful not to attend and to frame the resolution of old human rights cases within a wider technocratic objective to “move forward”. Wiranto’s appointment to Coordinating Minister of Political, Legal and Security Affairs effectively ends this human rights conversation.

Meanwhile, there has been major regression in the security sector. Emboldened by deeply conservative leadership and presidential politicking, the military has openly reclaimed its place in domestic security and development. Defence Minister Ryamizard Ryacudu has argued that Indonesia is under threat from a proxy war, waged through domestic NGOs, forest haze and homosexuals. His counterpart heading the TNI, Gatot Nurmantyo has openly voiced doubts about the suitability of democracy to Indonesia. Together they front a people’s defence program, Bela Negara [State Defence], that harks back to Hankamrata, or ‘Total People’s Defence’, a civil militarisation program under the New Order.

Jokowi’s pro-poor agenda is also mixed. There’s a health care card, an education card, a new family prosperity card, all of which promise great things for social redistribution, but social spending is yet to increase significantly. Jokowi himself is careful to appear sympathetic to the problems of the poor that catch his eye such as the Kendeng cement protestors. Others, such as the fisher communities along the Jakarta Bay that as governor he swore to protect, have seen their political hopes razed alongside their homes. How the One Map project will balance the imperatives of the state infrastructure program against community claims to land will be instructive.

What we are left with is a ruling ideology that is avowedly developmentalist, made up of an ideological mash up of neoliberalism, economic nationalism, and social engineering, rather than any liberal progressive agenda to improve the quality of democracy.

Jokowi’s developmentalist democracy goes beyond a simplistic personal attribute or set of beliefs: it is inherent to his class status. After all, Jokowi is a member of the bourgeoisie, the small entrepreneurial faction of Indonesia’s middle class. This new rich came of age in the 1990s, in a wider context of waning state capitalism and the emergence of a rising oligarchical class.

Up and coming entrepreneurs of Jokowi’s ilk often didn’t have the luxury of avoiding the predatory state. Instead they needed to become adept at forming alliances with established political and business players, however uncomfortable. Those alliances were as much an exercise in wilful misunderstanding beneath broadly agreeable slogans – national integrity, Pancasila, food sustainability – than any single ideological agenda.

More broadly, elements of the middle class are defined by a kind of ideological schizophrenia, often holding a confusion of liberal and illiberal views concurrently. They exhibit more interest in firm rule, and the provision of services and standards, than a truly social democracy.

The middle class are fearful of social and spatial disorder, ever conscious of vast number of Indonesia’s poor and the cheap labour they provide. Historically, this has made the middle class vulnerable to populism and ultra-nationalism.

Their extensive rational education makes them more, not less, vulnerable to the magical thinking offered by technocratic solutions to socio-economic ills. When that hasn’t worked, the middle class trust their coercive state institutions, despite knowing their brutal history, to quell social disorder. Rather than thinking of the bourgeoisie as beating heart democrats, repressed by old order forces, and welcoming their rise as an a priori win for democracy, we instead need to consider the long history in which alliances with regressive forces, however shifting and disloyal, have central to their genesis.

This should also give way to harder questions about the negotiated agendas of the “new faces” cutting their teeth on regional politics with an eye upwards.

If the cabinet reshuffle tells us anything, it’s that our Middle Class President is more comfortable in his uncomfortable political accommodations than we have previously imagined.

Jacqui Baker is a Lecturer in Southeast Asian Politics at Murdoch University. This editorial is adapted from a talk given on 29 July at the Sydney Southeast Asia Centre’s Democratic Updates Policy Roundtable. 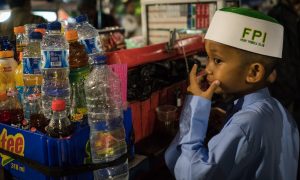 Ian Wilson is right that binary 'diversity vs. sectarian populism' narratives are unhelpful. But religious divides still matter in the politics of inequality.