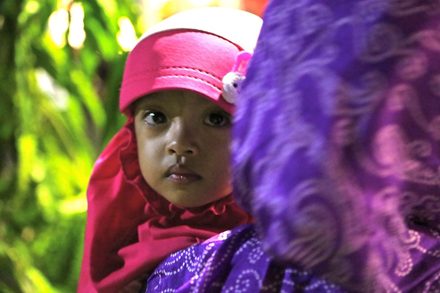 Idul Fitri: the view from Yogyakarta

On an unusually cool night, I found myself on the back of a motorbike going through the streets of Yogyakarta following a pirate ship being pulled along by a motorbike.

It was headed to the annual Takbiran carnival, a celebration of the end of the fasting month by the city’s mosques and their communities. Takbir means ‘a recital of God is Great’.

Towns and cities all over Indonesia celebrated the eve of Idul Fitri with much fanfare, creating a peaceful carnivalesque atmosphere. We went to the area where all of the floats were lining up to form the parade.

As the different floats moved in, toppled over and lined up, the mood was light and cheerful. Children practiced their marching and chanting,’ Allah Akbar/ ‘God is Great’.

Everybody I spoke to said that they were happy that the election was behind them and there has been no incidents of reprisals in their areas. Here’s a selection of scenes from the evening.

Here are some select shots from the festivities. A little girl rides in a little boat. Some mosques showed their support for Gaza; ‘Save Palestine’. Rembaka for Gaza; a mosque shows its support for Gaza. A little girl watches the parade. In a show of pluralism Papua was also reprented. Rock Muslims. In between calls to prayer, this marching band played rock music. A band member waits his turn to join the carnival. Dokar girls. Little girls were very pleased to be photographed in the traditional decorated horse and cart ‘dokar’. Angie Bexley is a Research Associate in the Department of Anthropology at the Australian National University’s College of Arts and Social Sciences. She is also a co-founder of Culturekitchen foodlab. She thanks Onyen Ho for his assistance.