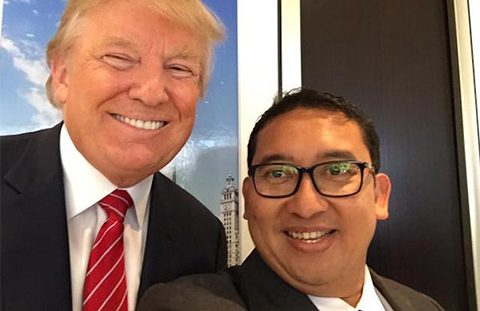 Deputy Speaker of the House Fadli Zon poses with Donald Trump during a recent trip to the US. The meeting last month caused much controversy in Indonesia. Photo: @fadlizon on Twitter

In Indonesia the words “study tour” could just as easily be replaced with “junket”.

Most Indonesians think of study tours, or “studi banding”, as a politician’s way of going on an overseas holiday at the taxpayers’ expense.

There are exceptions, of course.

Over a decade ago, I took the then vice-governor of Papua province, Konstan Karma, to Uganda to see what a generalised HIV epidemic looked like. One morning, we visited a clinic at a university hospital in Kampala. It was overflowing with people, waiting patiently to be seen by a doctor. Bpk Karma chatted happily with many of them.

After a while, not wanting to appear impatient, he took me aside and asked quietly: “When are we going to meet the AIDS patients?” Uuuuhhhhh…. “These are the AIDS patients, Bpk,” I replied.

“But it can’t be. All these women, all these children…” He was on the verge of tears.

Then he went back to chatting, now with greater concern, asking questions, patting kids on the head. When we left the clinic, he reached in to his pocket, pulled out a hundred dollar bill, and gave it to the doctor on duty.

After that visit, Bpk Karma tried very hard to convince fellow politicians in Papua to take HIV more seriously. His success was questionable, but it was clear that seeing the impending crisis with his own eyes persuaded him to try, at least, to avert that future.

Contrast that experience with this story from the Jakarta Globe, about Jakarta politicians on a three day “study tour” to Bali. Thirty-two Jakarta councillors felt the need to learn from Bali, and eight staffers went to dance attendance on them. This one paragraph says it all:

The main program on their itinerary, though, was a meeting with their counterparts at the Bali provincial legislature, which failed to take place. The Jakarta officials showed up at the council building on Thursday, only to be told that the very people they expected to meet had themselves embarked on a study trip to Yogyakarta.

And of course, there was last month’s visit to the US by House Speakers Setya Novanto and Fadli Zon, whose meeting with business tycoon and presidential candidate Donald Trump has now seen them summoned to an ethics council hearing. The two turned up at a press conference at Trump Tower while in New York representing Indonesia at an inter-parliamentary gathering hosted by the UN.

Their party, Gerindra, responded by saying they wouldn’t allow their lawmakers to attend any more overseas tours, only to do a u-turn a day later and lift the ban for ‘beneficial’ trips.

This phenomenal waste of money and opportunity jars especially because I happen to be doing some work on the history of the HIV epidemic in China. Foreign study tours of up to two months, during which technocrats attended classes or went on site visits every day, were the key which unlocked an eventual response.

The study tours sparked a lot of home-grown experimentation by a small but dedicated group of Chinese researchers and civil servants. It took a while for China’s leaders to give a damn about HIV, but once they did start to care, those foreign-inspired technocrats had tried out different models at home, knew what was likely to work, and were ready to roll.

If Indonesia’s public servants did more studying and less touring, the country might be better off.

Elizabeth Pisani is author of ‘Indonesia Etc.: Exploring the Improbable Nation’. A version of this article was first published on her website.