The announcement by the World Bank last week that Thailand has moved into the upper-middle income category is the culmination of a sustained period of economic growth, with profound social significance. GDP per capita data for Thailand (and with Indonesia and China added for comparison) paints a compelling picture. (You can create your own graphs on all sorts of social and economic measure here.) 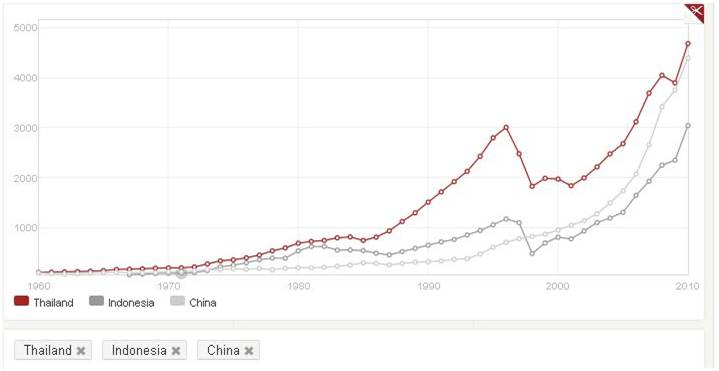 According to Michael Spence’s The Next Convergence Thailand is one of only 13 developing countries that have “managed to grow for twenty-five years or more at an average rate of 7 percent of more” (54). Thailand achieved this between 1960 and 1997. As the graph (below) of Thailand’s annual GDP growth rate shows, both the Asias financial crisis and the GFC sent the Thai economy backwards but healthy growth rates were quickly resumed.

An economy growing at an average of 7% per year will double in size in about 10 years. At this rate Thailand will have moved into the World Bank’s high income category in less than 20 years. Economic growth isn’t everything, and some will point to the social, environmental and cultural costs of Thailand’s modern transformation. But let’s not lose signs of some of Thailand’s great successes, despite some of the obvious failings in its political system:

These are dramatic successes and they highlight Thailand’s capacity for ongoing economic and social development. However, there is nothing inevitable about the path from an upper-middle income country to a high income country. Thailand faces some important challenges. Domestic consumption needs to be strengthened to balance out some of the heavy dependence on exports; the quality of education needs to be improved so that Thailand can increase its productivity as its low-wage advantages evaporate; and stark socio-economic disparity must be addressed so the benefits of growth are more evenly spread. As Michael Spence writes:

Distribution, as well as growth, matters. Emerging economies still need to manage better their growing domestic tensions due to rising income inequality and uneven access to basic services. A failure on this front would derail their domestic and regional growth dynamics. Among emerging economies and their governments, this is better understood today. Distributional aspects of growth strategy are firmly placed on emerging countries’ policy agenda. (188)

We will soon have a clearer idea how firmy it is on Yingluck’s agenda.