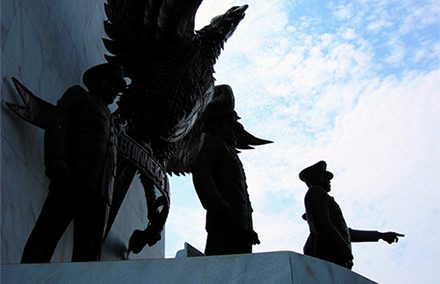 Indonesia could be on the brink of a human rights breakthrough with hearings on notorious massacres, writes Vannessa Hearman.

The Indonesian government’s agreement for this symposium to go ahead was in itself somewhat of a breakthrough, in the increasingly narrow political space to discuss 1965 and the anti-communist violence in Indonesia.

The symposium, being government sponsored, was not the target of protests like other 1965-related events that have been disrupted, harassed, and canceled. These past events include the Ubud Writers’ Festival in 2015 and screenings of the new film on the Buru island prison, Buru Tanah Air Beta (Buru, My Homeland).

The involvement of the Ministry for Political and Security Affairs and the National Human Rights Commission ensured that the symposium was able to go ahead. The fact that one of the key protagonists of the hearing was Agus Widjojo, son of murdered Army Prosecutor General, Lieutenant General Sutojo, also conferred legitimacy. Widjojo was recently appointed a head of Lemhanas (Lembaga Ketahanan Nasional, National Resilience Institute), a state agency responsible to the President.

Widjojo is involved in the group FSAB (Forum Solidaritas Anak Bangsa, Solidarity Forum for the Nations’ Children). The group brings together children of communist leaders, such as Ilham Aidit, son of Indonesian Communist Party chairperson Aidit, and those of the Army officers murdered at Lubang Buaya by the Thirtieth September Movement in October 1965. The latter include Amelia Yani, daughter of General Ahmad Yani, former head of the Army in 1965, and Agus Widjojo himself. Widjojo’s position is that reconciliation, accompanied by truth-telling, is vital if Indonesia is to move forward.

Media and commentators seized upon statements by two former military officers as showing that nothing has changed in Indonesia and that impunity continues. Unsurprisingly, those from military backgrounds such as Minister Luhut Panjaitan, a former Kopassus (Special Forces) officer and his former superior, retired general Sintong Panjaitan maintained the military’s line that there was hardly any killing of leftists in 1965.

Luhut Panjaitan queried where the mass graves were if as many as half a million people had been killed while Sintong said he was aware of only one person killed in Central Java. These are familiar refrains of denial that government and military representatives had made before. The promotion of these views yet again at the symposium was nothing extraordinary. But in reality, the symposium was more than that.

The more surprising aspects were the inclusion of views of academics and intellectuals who earlier had opposed the government version of events, particularly that the slaughter of leftists after the murder of the Army officers at Lubang Buaya in October 1965 was the result of a horizontal conflict within society.

The indefatigable historian Asvi Warman Adam, from the Indonesian Institute of Sciences, and who has spoken out consistently in favour of documenting the anti-communist violence and for historical truth-telling, spoke at the symposium. Historian Dr Baskara Wardaya from Sanata Dharma University in Yogyakarta encouraged Indonesia to move towards reconciliation accompanied by truth-telling.

Renowned women’s activist Kamala Chandrakirana from the Coalition of Truth and Justice and Galuh Wandita from Asia Justice and Rights both urged the government to address the needs of victims and outlined ways the state could pursue those aims.

A presentation by the National Commission on Violence against Women highlighted the plight of women victims and urged for immediate measures for them, such as meeting their basic needs. Former political prisoner and leftist writer Putu Oka Sukanta also spoke at the symposium about his experiences.

Therefore, while some views expressed at the symposium denied that the state ought to bear any responsibility for the violence, it was also a forum in which organisations working with victims, as well as victims themselves and intellectuals were able to urge the Indonesian state to commit to reparative measures.

Closing comments by Sidarto Danusubroto from the Presidential Advisory Council showed that the belligerence shown by Minister Panjaitan in his opening remarks were not necessarily the view of all government figures. Danusubroto enumerated the abuses suffered by the victims, many of which went beyond immediate violence and detention, but extended to discrimination and stigmatisation against the Left under the New Order regime.

This naming of the abuses would have been very gratifying for former political prisoners and their families. It showed us a glimmer of what state accountability could look like for Indonesia and how the burden of history, built on lies and deception, could be lifted.

The Advisory Council is not a powerful body in the bureaucracy, but it has a track record in attempting to address past human rights abuses when in 2012, Council member Albert Hasibuan drafted the text of an apology to victims of human rights abuses for then-president Susilo Bambang Yudhoyono.  As a result of opposition received from certain powerful quarters, that apology was never delivered.

What actions the government will take remains to be seen.

Dr Vannessa Hearman is lecturer in Indonesian studies at the University of Sydney.