On April 27 2020, the Government of Myanmar released its Covid-19 Economic Relief Plan with 7 goals that extend from private sector to healthcare support. An economic relief plan is much needed right now, particularly as the rural economy is suffering greatly. Sixty-eight percent of households in Myanmar have at least one member employed in agriculture, showing that disruptions in agriculture will have a large impact on households across the country. Necessary lockdowns have destroyed the livelihoods of small sellers and traders in the informal economy while smallholder farmers are having difficulty accessing certain agricultural needs and exporting agriculture produce.

Fortunately, Myanmar’s economic relief plan recognizes that certain sectors of the population need support during this time. The government is implementing measures that target vulnerable households, smallholder farmers, returning migrants, and Internally Displaced Persons. With a combination of food aid, cash transfer, and employment in public projects, the economic relief plan could help sustain the local economy if implemented properly.

However, the issue with the plan is in the details, which inevitably affects its implementation. It is concerning that the government has not provided any guidelines to subnational and township authorities for identifying eligible beneficiaries, which could lead the government to exclude the most vulnerable groups they intend to target. This includes groups who lack formal documents (such as national registration cards and land documents) and/or work in the informal sector.

This begs the question: Who gets to be categorized as vulnerable and receive much-needed economic assistance?

Women are experiencing increased levels of domestic violence in the pandemic and their economic independence is at risk, yet it is unclear whether the government would categorize them as vulnerable. What about populations located in conflict affected areas seeing a resurgence of conflict. Do they count?

With the food assistance programme announced on April 6 2020, we’ve already seen the government  struggle to understand who should be counted as vulnerable, and in rolling out economic relief assistance to vulnerable households. In that programme there was inconsistent communication between the union, subnational and township authorities on how beneficiaries should be identified. In the end, only township level General Administration Department (GAD) officers were responsible for identifying beneficiaries, without clear guidelines on the definition of vulnerable households. They were only given 48 hours to compile a list of who they thought should qualify. GAD township officer were able to make decisions at their own discretion and there were no safeguards to prevent corruption or bias.

The government then transferred funds to townships to purchase the food aid for beneficiaries. However, at times the funds transferred were insufficient. From information received by the author, in one township, funds were only enough to purchase rations for less than 20% of intended beneficiaries. In one village tract in Mandalay, village administrators allegedly reported zero eligible households to the township GAD as they were concerned that if allocated funds were insufficient to provide for for all those who need rations it would cause tensions between villagers.

The food assistance programme seems to have been a one-off process, as the government has checked off food assistance as “done” in the economic relief plan document. This is alarming given that the World Bank has forecasted that global poverty will increase due to the pandemic, pushing 40-60 million people into extreme poverty soon. Food security for many of these populations will undoubtedly be a serious issue.

Alarmingly, the economic relief plan also explains that the government plans to fast track “high growth” economic and infrastructure projects but does not define what sectors qualify as “high growth”. They could include, for instance, coal mining and power plant projects, which in turn are causing severe social and environmental damage and would impact rural and vulnerable households’ livelihoods and health. Infrastructure projects tend to require acquiring large swathes of land. By fast tracking these projects, the government may skip necessary standards and procedures that help protect vulnerable communities from being dispossessed of their land.

Ultimately, while targeted economic measures are welcome during these extraordinary times more than ever, in order to responsibly roll out the plan, the government should engage with local communities who desperately need economic assistance in its implementation. After all, who knows better how to help the vulnerable than the vulnerable themselves? 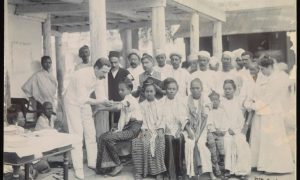