Since the military junta’s announcement in 2010 that they were willing to begin a transition to democracy and implement democratic reforms arms imports from Chinese, Russian and other outside supplies have risen dramatically. Arms imports into the country in 2011 surged to an all time high of nearly $700 million, more than double the highest annual figure since 1989 and remained almost as high in 2012. Fatalities in Burma’s armed conflicts have also risen during these years as a more than decade-long downward trend was reversed following the massive rearming of the military and its subsequent offensives against the Kachin Independence Army, which began in June of 2011.

The military of Myanmar is today far better equipped than it was just three years ago. Myanmar has received some of the most advanced weapon systems on the international market including MIG-29s, an advanced supersonic fighter and ground attack jet, ground attack helicopters, heavy battle tanks, mobile artillery guns fitted with computerized fire control systems and vast quantities of small arms, spare parts and ammunition. The regime has also not held these weapons in reserve and nearly all of these weapon systems have already been deployed on Burma’s civil war battlefields.

The government’s weapons purchases have come almost exclusively from Russia and China with sales divided almost evenly between the two. Much smaller volumes of weapons were also acquired from Italian and Ukrainian suppliers in 2011 and 2012 (in spite of an EU arms embargo in the case of the former). All told, these arms deals totaled over a $1.2 billion in 2011-2012 and placed the government in a much stronger military position than it had enjoyed previously. 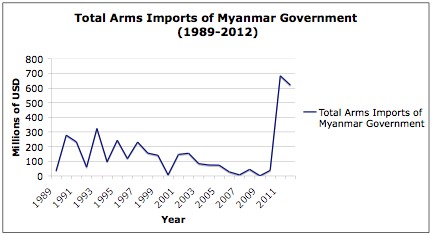 As a result of these weapons sales the Myanmar military is today no longer the weak, ineffective, and clumsy army it once was. As recently as in the 1990s the regime was hurling civilians (mostly ethnic minorities) in front of its forces as minesweepers, shanghaiing civilians from all walks of life to serve as forced laborers in military units and using child soldiers to fill up the ranks after costly campaigns. Today however the regime no longer relies nearly as much on such crude, horrific and barbaric tactics to achieve its military goals. Advanced weapon systems like those imported by the regime have enabled it to sanitize its wars for foreign governments sensitive to human rights concerns while simultaneously gaining additional military leverage on the battlefield.

More weapons imports also coincided with more people being killed in the conflicts across Burma. Despite the easing of sanctions in 2011 and 2012 these years were some of the bloodiest Burma has witnessed in recent memory. Government attacks against the KIA, with whom the government had had a ceasefire agreement since 1994 led to large losses of life on both sides as the government used its newest weapons, including both its ground attack helicopters and MIG 29 jets, to attack the ethnic minority rebels.

Perhaps what we are witnessing today in the discourse about Burma is a transition away from the facts. Over the past 20 years the forms of violence in Burma have transformed away from the sensationally horrific use of human mine sweepers and child soldiers to the less provocative images of sleek and shinny new jets and helicopters firing rockets and dropping bombs into rainforest canopies. The facts however are real and in no way indicate that by filling the Myanmar Government’s coffers with funds for arms purchases the international community has lessened the violence or helped bring peace to Burma.

Jacob Sommer is currently aspiring to enroll in PhD program in Political Science. Most recently he has worked as a researcher at Uppsala University’s Department of Peace and Conflict Research on the staff of the Uppsala Conflict Data Program. His Twitter handle is @Jakesommer.