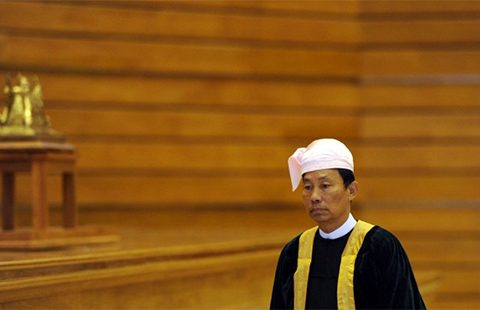 Passing over the gavel without a fight This column was published in The Myanmar Times on Monday, 8 February 2016.

In 2011, when Thura U Shwe Mann and U Khin Aung Myint took the speakerships in Naypyitaw’s Pyithu Hluttaw and Amyotha Hluttaw, nobody knew what to expect. Their public profiles were thin, shaped only by loyal service to the State Peace and Development Council.

Thura U Shwe Mann, a decorated combat commander, was the third-ranking official in the old regime. Sanctioned by Western democracies, secluded behind Nay Pyi Taw’s high walls, he was an enigmatic figure.

U Khin Aung Myint was even more mysterious. His last army job was as head of psychological warfare. He then went on to serve as the SPDC’s minister for culture. Like a shot out of the dark, he ended up taking the Amyotha Hluttaw high chair, and with it the first turn as Speaker of the joint house, the Pyidaungsu Hluttaw.

In the beginning, almost nobody took the legislatures seriously. Access was hard to get, and the government was disinclined to give the media, or anyone else, a chance to peer inside. Commentators derided the first sittings for their brevity. Myanmar’s “15-minute parliament” was deemed a joke.

What happened next will be the subject of sustained debate for many years to come. From my vantage, which has occasionally swerved close to the legislative furnace, much of Myanmar’s current success is the outcome of decisions made by the two Speakers.

They took risks, early and often, in seeking to make the legislature more than a rubber stamp. From the start, they imposed discipline on the elected politicians and military appointees.

Years ago, I wrote that the format resembled the world’s grandest classroom, with a teacher controlling hundreds of potentially wayward pupils. This hierarchy was strict: it made Thura U Shwe Mann and U Khin Aung Myint figures of distant and unflinching authority.

Up close they proved much more normal than their critics ever imagined. When he began to travel more widely, Thura U Shwe Mann impressed foreign audiences with his grasp of detail and his ambitions for reform. New ideas poached on these visits quickly found their way into legislative practice.

U Khin Aung Myint’s reputation as a parliamentary philosopher also grew over time. A great fan of the written word, he actively encouraged the hluttaw members to keep up with public debate. The legislative libraries took shape, stocked with relevant and often surprisingly interesting materials.

Notwithstanding his State Peace and Development Council hard-man persona, U Khin Aung Myint even cultivated a comedic sideline. That joviality was on show during last month’s celebrations for the first cohort of legislators. Taking his cue from foreign traditions of public roasting, he had fun at the expense of everyone, including himself.

It is a remarkable turnaround. So what happened?

My guess is that, over time, the Speakers learned that there was little to fear in the democratic arrangements. Running a military dictatorship was hard and often lonely work. The men who committed their lives to serving the SPDC also grew to acknowledge that their system was failing. People were too poor, the country embarrassingly weak. The rest is history.

The further entrenchment of a robust legislative culture is now the responsibility of the new Speakers: U Win Myint and Mahn Win Khaing Than. Both seem like they will be capable successors, and will likely want to stamp a more democratic style on legislative functions. That will be hard, requiring constant attention not only to National League for Democracy priorities but also to the inevitable competition that emerges between the legislature and the executive.

There should be no illusions about the workload either. Even though the staff of the hluttaw has grown markedly in number and skills since 2011, there are still relatively few senior figures with substantial experience guiding complex legislative decision-making. The drafting of laws is hit-and-miss. That probably will not change.

Indeed, the work of the legislature will remain unforgiving. Billions of dollars in investment can hinge on the wording of key clauses, and the overall pattern of the debate is supposed to signal whether Myanmar is going up or down. Just recall the derision about the “15-minute parliament” for a taste of what will happen if the NLD handle their new power irresponsibly.

At the same time, a breakdown of this fragile order is worth avoiding at almost any cost. The reason, to be blunt, is that a competent legislature gives everyone confidence that the future will be better than the past. Such confidence matters a lot given what will be a long-term threat of renewed military influence. If things go badly wrong, a coup is not out of the question.

That hypothetical is one further reason that U Khin Aung Myint and Thura U Shwe Mann deserve applause for stepping down from their top positions without a fight. Time will tell if those still in army uniforms are prepared to accept the turbulence that the nascent democracy will bring.