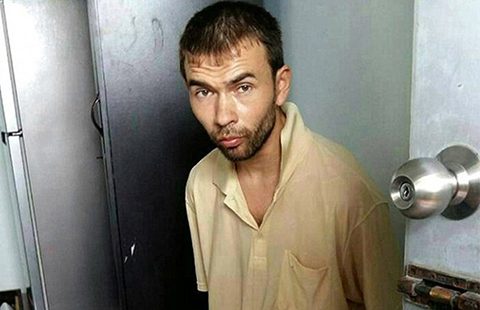 Were the Grey Wolves behind Bangkok bombing? ‘Adem Karadag’ has been arrested in connection to the Bangkok bombing. But is he a member of the Grey Wolves? Photo: Royal Thai Police.

On 8 July 2015, the deportation of 109 Uighur refugees back to China by Thai authorities shifted mob attacks against Asian tourists in Turkey to protests at the Consulate General of Thailand in Istanbul and the Thai Embassy in Ankara.

After stoning the consulate, smashing the windows and wrenching the doors open, the mob poured consular documents and files onto the street.

Roughly two months later, on 28 August a man identified as Adem Karadag, with a fake Turkish passport, was arrested by Thai police in Nong Chok district of Bangkok, as a possible key suspect in the 17 August bombing at the Erawan shrine.

He was found with dozens of fake Turkish passports and explosives similar to the ones used in what is now Thailand’s most deadly peacetime attack.

The recent anti-Thai and anti-Chinese protests by the Grey Wolves and the arrest of an alleged Turkish citizen by Thai police has sparked arguments putting the group at the forefront of those possibly behind the deadly bombing that killed 20 and left more than one hundred injured.

For example Susan Cunningham’s piece in Forbes outlines long-time security analyst Anthony Davis’ argument for the strong probability of the Grey Wolves’ involvement in the Bangkok bombings. Lindsay Murdoch of Australia’s Fairfax media has also outlined the Grey Wolves past activities, including military operations in post-Soviet states with Turkic people. But before the blame is laid squarely at their feet, a few key points need to be considered.

First, the Grey Wolves, a group also known as the Idealist Hearts, was founded in February 1968 to break the hegemony of socialist groups in Turkish universities throughout the 1960s and 1970s. Formed by the leader of the Nationalist Action Party, Alparslan Turkes, the group’s raison d’etre was anti-communism.

The Nationalist Action Party has since then held firm de facto control of the Idealist Hearts, although the organisation is not a formal sub-branch of the party. Hearts members came to be known as the Grey Wolves because of their logo, which was originally derived from a Turkic myth.

The organisation soon spread all over Turkey, and until the 1980s, a fierce anti-left stance was combined with Pan-Turkic myths, racism and some Islamic discourses under a typical fascistic leadership cult and strict hierarchy.

During the late 1970s many Grey Wolves sympathisers were recruited for counter-guerrilla operations and used as hoods in the paramilitary actions of the Turkish “deep state” (a group of anti-democratic coalitions with strong influence in Turkish politics) against rising left wing activism in the country.

During this era, members of the group were also involved in several assassinations of left wing intellectuals and a few massacres against Turkey’s Alevite population who were the main base of the far left during that decade.

In the decade following the 1980 Turkish military coup, the suppression of the Turkish left by the military, the collapse of the Soviet bloc and the consequent eradication of “the traditional other” of the Grey Wolves left the group in an ideological vacuum.

With this identity crisis a few sympathisers of the group became largely affiliated with the Turkish Mafia. Several members of the Hearts established connections with international crime, with some becoming hit men for international terrorist groups.

One frequenter of the Grey Wolves, Mehmet Ali Agca, who was convicted of assassinating a prominent left-wing Turkish journalist, was later caught at St Peter’s Square after attempting to assassinate Pope Jean Paul in May 1981.

In the 2000s the organisation turned into a nation-wide club where attendees were exposed to a blend of pan-Turkic, Islamist and anti-Kurdish racist ideas. Today the appeal of this ideological mixture is mostly attractive for Turkey’s least educated youth, and they gather in protests from time to time for pan-Turkic causes.

Despite the Grey Wolves possibly providing a large pool of followers to be used in petty crime, minor mafia activities and even human trafficking, I highly doubt their capacity and preparedness to conduct a bombing such as that at Bangkok’s Erawan shrine.

Simply put, the group has never participated in such a transnational mass bombing.

The person charged in Bangkok may be a sympathiser or a regular member/visitor of branches of this organisation in Turkey. He may also be a supporter of the pan-Turkic ideology of the Grey Wolves. Furthermore, the Grey Wolves might have been so agitated in their nationalist feelings for the Uighur cause to develop strong anti-Thai and anti-Chinese responses.

However, as an organisation the Idealist Hearts, or Grey Wolves, under strict control of the leadership of Turkey’s Nationalist Action Party, is unlikely to be the group behind the Bangkok bombings.

Dr M. Murat Yurtbilir is an associate lecturer in Turkish studies at the Centre for Arab and Islamic Studies, The Australian National University. His research focuses on Turkish politics, history and foreign policy, and international politics in Central Asia.