[AUDIO] Whither academic freedom in Thailand?

The criminal trial of a senior Thai academic along with four others, that commenced this July, has cast a sharp spotlight on conditions in Thailand’s universities since the military seized government there in 2014.

Dr Chayan Vaddhanaphuti, Director of the Regional Centre for Social Science and Sustainable Development at Chiang Mai University, three students and a translator are those being tried for violating an army order against political assemblies. Their criminal trial arises from a small protest against Government monitoring and recording of proceedings at the International Thai Studies Conference held at Chiang Mai University in July 2017. Participants at the conference held signs reading “an academic forum is not a military camp”.

What does this criminal case indicate about the state of academic freedom under military dictatorship in Thailand today? What part can scholars abroad, including in Australia, play in supporting embattled counterparts in Thailand?

This is a recording of an academic forum held at the ANU on 23 Aug 2018, “Whither academic freedom in Thailand? The criminal case against Dr Chayan and four others”. This forum was co-hosted by the Department of Political & Social Change, ANU College of Asia & the Pacific and the Centre for International & Public Law, ANU College of Law.

Craig Reynolds is Honorary Professor at the School of Culture, History and Language, ANU College of Asia & the Pacific.

Anthony Connolly is Professor and Head of the School of Law, ANU College of Law. 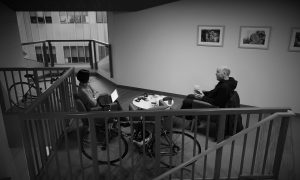