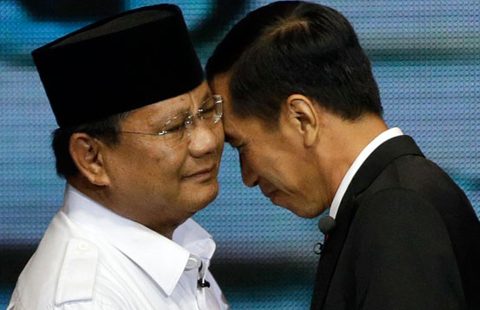 They examine the pros and cons of candidates Joko Widodo and Prabowo Subianto and how the electorate is responding to them. In particular they look at why Prabowo is fast catching Jokowi in what was originally billed as a one-horse race.

“In the parliamentary elections, Jokowi and PDI-P did much less well than expected. That’s partly because their advertising didn’t focus on Jokowi or use him as their main electoral asset,” says Fealy.

“So the party had misplaced advertisements, lost a lot of money and squandered a lot of momentum. After the election campaign Jokowi seemed out of sorts and there seemed to be a lot of tension between him and senior PDI-P figures – over who would be his running mate for example.”

Tapsell and Fealy also examine how Australia-Indonesia relations will likely be impacted by a new president in Indonesia.

“There will be some difficulties [for Australia] with Jokowi as president,” says Fealy, “because his basic stand point is as a nationalist, and he’s probably much less inclined to accommodate Australia than SBY has been.

“Prabowo is much more difficult to predict. His range of behaviour really spans the spectrum, from militant remarks railing against what he sees as the exploitative nature of global capitalism, to statements that cultivate goodwill among the international community and which indicate he is very open to global business.”

Watch the full video in the player above or online at ANU channel on YouTube.

Associate Professor Greg Fealy is based at the Department of Political and Social Change, ANU College of Asia and the Pacific.

Dr Ross Tapsell is based in the School of Culture, History and Language, ANU College of Asia and the Pacific, and is a member of New Mandala’s Indo Votes team.