Have reports of Bali’s death been greatly exaggerated?

There has been a lot of speculation about the impact of COVID-19 on the Indonesian island of Bali, which has seen tourist arrivals dry up amid border closures and the grounding of domestic flights. Some of the more balanced stories have focused on the devastating impact to locals employed in the tourism industry such as hotel staff, tour guides and restaurant workers. Others have highlighted the experience of foreigners hunkered down in Bali for the duration of the crisis. These analyses vary in their tone and content, but some of the more sensationalist tend to privilege the perspective of foreigners or use somewhat alarmist language to push a narrative of impending disaster. But how dire is the situation in Bali really? An immensely challenging road certainly lays ahead, but there are some misconceptions and narratives out there that I wanted to push back against a bit.

This story in the LA Times is a good starting point. The piece is rightly critical of the Indonesian government’s slow response to the crisis, but it then says the country’s economy has “been decimated by the lack of tourists to places like Bali.” In fact, tourism makes up a relatively small portion of Indonesia’s GDP – investment and household consumption have been doing the heavy lifting of late for this trillion-dollar economy. And if you totalled up the value of all of Bali’s economic activity in 2019 it would be 1.63% of Indonesia’s total output. Is Bali an important part of the Indonesian economy that brings in large amounts of foreign currency? Undoubtedly. But Bali is not Indonesia.

Yet even if its economic footprint is not quite as big as its outsized place in peoples’ imaginations, it is a very popular tourist destination. And clearly any businesses depending on tourism are in deep trouble right now, as are their employees. The West Australian ran this piece with the headline  “Bali economy collapses.” This story from Al Jazeera states that 80% of Bali’s GDP comes from tourism, while making the rather dramatic claim that “Without tourists, Bali will die.” But how accurate are these claims?

In 2019 according to the Central Statistics Agency (BPS), 45% of Bali’s GDP came from agriculture, education, manufacturing, health care, financial services and other industries that one would not expect to be directly tied to the tourism sector. 55% came from hotels, restaurants, retail, transportation, real estate and construction. The deputy governor has estimated that 60% of the island’s GDP is supported by tourism, while the head of Bali’s tourism department estimates half of the population has some connection to the industry. The loss of visitors is obviously a staggering blow to the economy, especially as service jobs supported by tourism tend to pay well – but the 80% figure still appears to be an over-estimation. It is also far from clear that this has caused the economy to collapse.

Only certain parts of Bali have really high and immediate exposure to tourism. Badung Regency, in which the tourist hot-spots of Kuta, Canggu and Seminyak are located, is the most exposed and is feeling the most immediate impact. Those areas are truly ghost towns already.  But Kuta and Seminyak are not Bali. Outside of Badung, agriculture is actually the dominant industry in the majority of Bali’s regencies, accounting for nearly 25% of output in Karangasem and 26.8% in Bangli. BPS estimated that in 2018 approximately 477,000 workers were employed in the agriculture sector.

While it is possible that the price of agricultural products will fall due to shrinking demand from hotels and restaurants, the state-owned logistics and commodity broker BULOG has already stated that if that happens they will step in to buy staple goods like rice produced by Balinese farmers in order to stabilize the price. This doesn’t mean that agriculture can offset the loss of jobs and revenue from tourism. But it underscores that Bali’s economy extends beyond the tourist resorts of Nusa Dua and the beaches of Kuta into less-seen areas where hardworking people, who have fairly limited direct exposure to the tourism sector, work in the sawah and run local warungs. And their world is still very much alive.

If you travel just a few kilometres outside of the tourist enclaves of Kuta or Seminyak, you will see people out and about. The government has shut the beaches, mandated that businesses close by 9pm, banned mass gatherings and recommended that people stay home if they can. Police in Sanur are forcing anyone caught not wearing a mask to do push-ups. Some shops have closed voluntarily; others have been ordered closed in an ad-hoc fashion by small administrative units called banjar. This patchwork system of closures is a less than ideal strategy, but it does allow some businesses to remain open and pay their staff for now.

In the provincial capital of Denpasar, traffic is noticeably lighter and many restaurants are doing takeout only. The police have set up checkpoints to ensure the rules are being observed, but people are still carrying on as best they can delivering food, selling phones, giving haircuts and otherwise trying to stay afloat. Bali might be on life support, but it’s far from dead. Those who can afford to stay home are doing so. But many do not have that luxury. They must work if they are able, as Indonesia’s weak and patchy social safety net – particularly for migrant labourers – will not catch them. And so life carries on. People buy gas. They get their motorbikes fixed at the bengkel. They show up at Pasar Badung and barter over the price of chickens. Is this risky? Maybe. But the alternative is likely worse.

Excluding Badung Regency and the capital city of Denpasar, 50% or more of all economic activity in Bali’s other seven regencies (home to 2.7 million people) comes from household consumption. That is, people buying the everyday things that they need. With tourism on ice, consumption must sustain the economy on fumes for now. But people can only buy things if they can work and earn income. That is why you see people on the streets of Denpasar every day, trying their best to make do. If they stopped doing that the economy of Bali really would collapse. 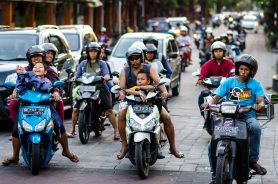 For me, this idea that Bali will die without tourists comes uncomfortably close to a White Saviour narrative, implying that local people have no choice but to hunker down and endure this crisis until foreigners start showing up again to rescue them. Such framing strips Indonesians of their agency in rising to meet this challenge, something they are quite capable of doing and have done many times before. Already you see local community efforts coming together to support workers who lost their jobs. Newly unemployed tour guides are trying to pivot toward retail.

Although I know many people are suffering, I have yet to speak to a single Go-Jek driver or restaurant worker or security guard who seemed defeated. Not a single store that I have gone to has had a run on supplies. And while no one can predict when overseas tourism will come back, domestic tourism actually accounts for a larger portion of inbound travel based on sheer volume. In 2018, just over 6 million tourists arrived in Bali from overseas. By comparison, 9.75 million came from other parts of Indonesia. This means the market that is likely to come back to life and provide some revenue the soonest is one driven by Indonesians, not foreigners.

Bali’s economy has taken a huge hit, and the evaporation of the predominant service sector that provided hundreds of thousands of well-paying jobs is a big loss. But it is not an insurmountable one. It will require a monumental effort by the people of Bali—hopefully with assistance from the government—to overcome these historically challenging circumstances. But it seems clear to me such an effort is already underway. Life doesn’t stop just because tourism stops – people find a way to keep going and to push through. It is unclear how long things can go on in this way, but at least for the moment there has been no meaningful supply chain disruption, no liquidity crisis, no social unrest. People are still going out every day buying and selling the things they need in order to keep the economy alive. All of which leads me to conclude that reports of the island’s imminent demise have indeed been greatly exaggerated.